/ News / Building Chicago’s Skyline: Inside the Cab of a Crane Operator

Building Chicago’s Skyline: Inside the Cab of a Crane Operator 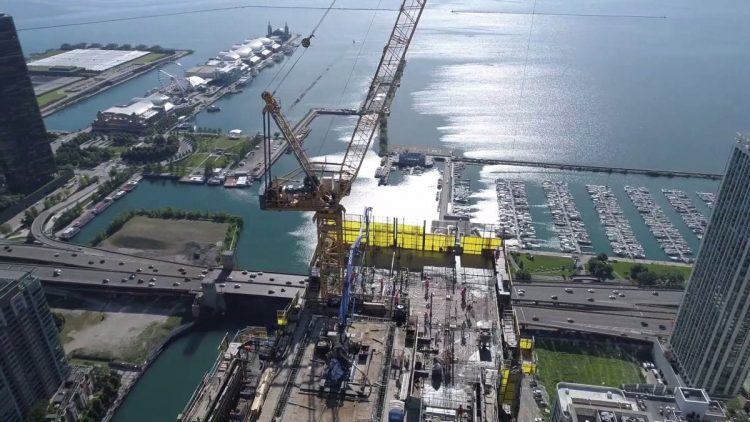 CHICAGO — In a city like Chicago, summer is often thought of as the “construction season” and 2018 is no exception.

But what most of us know about construction, and what is going on with these projects, is from outside the metal fences that surround them for years on end.

So WGN’s Julie Unruh grabbed a hard hat and a vest to make the trip straight to the top of one of the most notable builds going on in the city right now.

At Vista Tower, 400-plus employees of McHugh Construction are building the 1,100-foot  skyscraper.

“A tower crane operator is in a really high position of trust,” Michael Meagher, senior VP at McHugh Construction, said. “When they are coming in with cages and rebar, or a conduit or post tension cable, it has to be dropped precisely and strategically and in a safe manner.”

He added: “I think everything is notable and tricky about being a crane op. It is a very tough position with a lot of stress.”

On the day WGN visited the Vista site, the crane was 71 stories above Upper Wacker Drive. The equipment alone weighs 500,000 pounds, carries a load up to 29,000 pounds and it dances above the entire project, not to mention the city, for 12 hours everyday.

Meagher took the WGN team to meet the guy behind the crane controls, and see things from his perspective.

First, an elevator ride to the 59th floor. Then, an old-fashioned climb, step by step, rung by rung, to the 65th floor. Up there on the deck, a beehive of activity.

Above them all, the guy who works alone answering to everyone’s needs below for hours on end. If you want to be a crane operator, you need to be methodical, cautious and calm as you operate one of the most critical pieces of equipment on site. To meet him, means hoofing it back down to the 54th floor before beginning the ascent up to the crane operator’s cab on the 71st floor.

In his 16 years as a crane op, Lodato and his counterparts have seen it all. One retired McHugh crane operator even published a book showing what you might see 1,000 feet in the air. Up there, the wind is their greatest challenge. They keep Advil handy, always have snacks within an arms reach and they learn “to hold it.”

“That is the most frequent question I am asked, ‘How do we go to the bathroom?'” Lodato said.

The answer: carefully. Two empty bottles are the ticket to relief 71 stories up.

Mike Femali, is also Lodato’s relief. They split the 12 hour shift everyday. For him, the job as a crane operator was a calling.

“Prudential building was the first job my dad took me up. I was 8 years old. My first time up in a tower crane and Iknew from then on that was what I was going to do,” Femali said.

Again, trust and safety take center stage. Crane operators swing the boom by largely listening to co-workers instructions below. The added responsibility weighed against the thrill of running the crane.

“I worked on the Aqua building, 345 Ohio, something I can show my kids. They will be around long after I am gone,’ Lodato said. “That is something I take pride in.”

Putting the crane up is easier than taking it down. That process takes months no matter what time of year it is.

The average pay for a crane operator is $55 per hour, and because of the critical work they do, they often work overtime.

The completion date for the Vista Tower and Residences is spring 2020. The concrete crew who shepherded WGN around the work site will be done with the concrete portion in another six to seven months.

There are currently 49 cranes operating in the City of Chicago today.