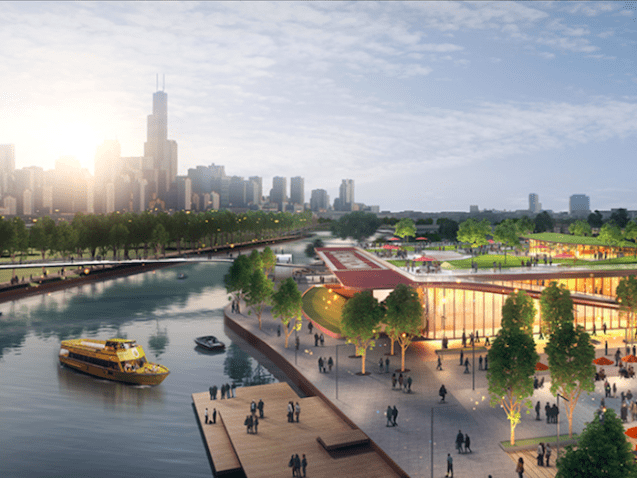 Developers on Wednesday unveiled plans for the $5 billion mixed-use Lincoln Yards riverfront development along the North Branch of the Chicago River — a concept pitched by designers as an economic super engine, but met with skepticism by some residents and parkland advocates.

The massive Sterling Bay proposal has been floated for months as one of the city’s top prospective sites in its bid for Amazon’s coveted second headquarters, but Wednesday’s meeting — which drew a standing-room-only crowd to the 400-capacity Near North Montessori School gymnasium — was the first public presentation of the project.

The overhaul of the Sterling Bay’s 53-acre section of the 760-acre North Branch Corridor was touted as a transformation from a drab industrial zone into a “vibrant community” by managing principal Andy Gloor, including a high-rise that could soar up to 800 feet, a 20,000-seat stadium and 13.5 acres of open space.

According to developers, it would create 23,000 on-site jobs and another 10,000 “indirect or induced” jobs, as well as 2,500 construction jobs per year during the development’s first decade.

And once populated with businesses, Sterling Bay says Lincoln Yards would churn out $4.2 billion in economic output annually, bringing in more than $38 million in revenue per year to the city.

They say they’ll add 12 million square feet in total buildings, about half residential — 5,000 units — and half commercial, including up to 500 hotel rooms.

Besides millions of square feet in new office, retail and residential space — and the stadium that would be home to a new professional soccer team co-owned by Cubs chairman Tom Ricketts and Sterling Bay — the developer has proposed an extension of The 606 bike trail, a public riverwalk and “abundant recreation space.”

Residents at Wednesday’s meeting expressed concern over where an influx of children to the area would be sent to school.

And architects, conservation and neighborhood groups who have banded together as the North Branch Park Preserve want developers to outline a plan for green space — and help build a 24-acre public park that would run along the river between North Avenue and Cortland Street. The group says the site is the last “large-scale” parcel remaining of the transforming 760-acre stretch along the river, with development “imminent” elsewhere.

Ald. Brian Hopkins (2nd) said he supports the Park Preserve plan but said the city would still have to buy or annex the swath of land directly southeast of Lincoln Yards — likely at a cost of over $120 million, not including an estimated $40 million for park construction. And it’s possible other developers — including Sterling Bay — could swoop in to pick up that valuable real estate, Hopkins said.

The North Branch Park Preserve estimates the overhaul could add 50,000 residents over the next few years to an already congested area. Sterling Bay says their plan calls for “infrastructure improvements and congestion reduction including a revised street grid and new bridges and parking garages.”

The developer said their aim is to keep things “low density” along the riverfront, and is proposing a new, relocated Clybourn Metra station, shuttle service to CTA stations at Armitage and North/Clybourn, water taxi stops and Divvy bike stations.

Those infrastructure upgrades, including 3.5 acres of new roadways, could cost up to $1 billion — which the developer says it would aim to cover largely with local and federal tax dollars.

Sterling Bay filed papers with the city zoning administrator Wednesday, Hopkins said, but they would still need to enlist Hopkins’ support before putting the plan before the city Plan Commission, Zoning Board and eventually the full City Council for approval.

“It’s as far from a done deal as you can get,” Hopkins said.