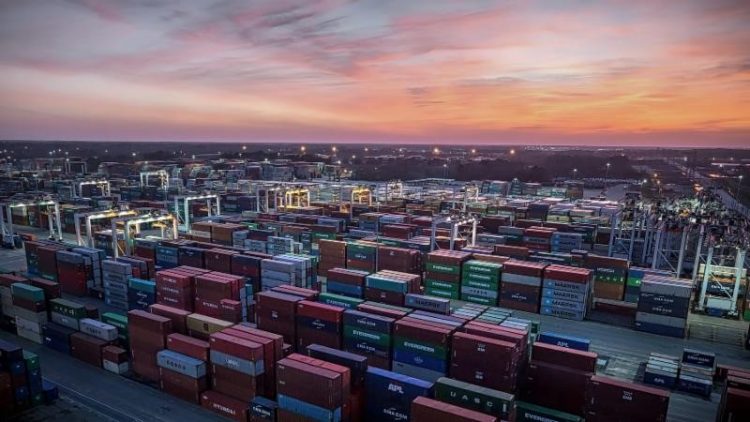 “We’re on track to move more than 300,000 TEUs in every month of the fiscal year, which will be a first for the Authority,” said GPA Executive Director Griff Lynch. “We’re also anticipating this to be the first fiscal year for the Port of Savannah to handle more than 4 million TEUs.”

April volumes reached 356,700 twenty-foot equivalent container units, up 7.1 percent or 23,700 units. As the fastest growing containerport in the nation, the Port of Savannah has achieved a compound annual growth rate of more than 5 percent a year over the past decade.

“As reported in the recent economic impact study by UGA’s Terry College of Business, trade through Georgia’s deepwater ports translates into jobs, higher incomes and greater productivity,” said GPA Board Chairman Jimmy Allgood. “In every region of Georgia, employers rely on the ports of Savannah and Brunswick to help them become more competitive on the global stage.”

To strengthen the Port of Savannah’s ability to support the state’s future economic growth, the GPA Board approved $66 million in terminal upgrades, including $24 million for the purchase of 10 additional rubber-tired gantry cranes.

“The Authority is committed to building additional capacity ahead of demand to ensure the Port of Savannah remains a trusted link in the supply chain serving Georgia and the Southeast,” Lynch said.

The crane purchase will bring the fleet at Garden City Terminal to 156 RTGs. The new cranes will support three new container rows, which the board approved in March. The additional container rows will increase annual capacity at the Port of Savannah by 150,000 TEUs. The RTGs will work over stacks that are five containers high and six deep, with a truck lane running alongside the stacks. Capable of running on electricity, the cranes will have a lift capacity of 50 metric tons. The cranes will arrive in two batches of five in the first and second quarters of calendar year 2019.

Also at Monday’s meeting, the GPA Board elected its officers, with Jimmy Allgood  as chairman, Will McKnight taking the position of vice chairman, and Joel Wooten elected as the next secretary/treasurer.

Find print-quality images of port operations here. Georgia’s deepwater ports and inland barge terminals support more than 439,000 jobs throughout the state annually and contribute $25 billion in income, $106 billion in revenue and $2.9 billion in state and local taxes to Georgia’s economy. The Port of Savannah handled 8.5 percent of U.S. containerized cargo volume and 10 percent of all U.S. containerized exports in FY2017.

James L. Allgood, a native of Dublin, Ga., founded Allgood Pest Solutions in 1974. Allgood has grown his business into a regional company with 350 employees. He has served as chairman of the Dublin-Laurens County Development Authority, and was president of Leadership Georgia in 1996. He earned a BBA in economics from the University of Georgia, and is currently the chairman of the board of UGA’s J.W. Fanning Institute for Leadership and Development. He and his wife, Kathy, have three children and four grandchildren. They live in Dublin.

William D. McKnight, a native of Augusta, Ga., has president of McKnight Construction Company since 1996. He graduated from Georgia Tech in 1979 with a bachelor’s degree in building construction. He serves on the board of directors of State Bank and the Augusta University Foundation. He has been president of both the Augusta Country Club and Augusta Golf Association. He has previously served on the boards of Associated General Contractors of Georgia, Augusta Ballet, First Tee, Richmond Academy Booster Club and Tuttle-Newton Home. He is a member of the Exchange Club of Augusta and Trinity-on-the-Hill United Methodist Church, where he serves on the finance committee. He and his wife, Janet, have four daughters and three grandsons. They reside in Augusta.

Joel O. Wooten is an attorney with the law firm of Butler Wooten & Peak, LLP. He served as chair of the University System of Georgia Board of Regents from 2004-2005 and was a board member from 1996-2006. He has been recognized as one of Georgia Trend’s 100 Most Influential Georgians, and has been repeatedly selected as a Georgia Super Lawyer. He received the State Bar of Georgia’s Tradition of Excellence Award in 2000 and the UGA Law School’s Distinguished Service Scroll in 2012. Wooten earned a bachelor’s degree in business administration from the University of Georgia in 1972, and earned a law degree from the University of Georgia in 1975. He and his wife, Sybrina, have five children and four grandchildren. They reside in Columbus.