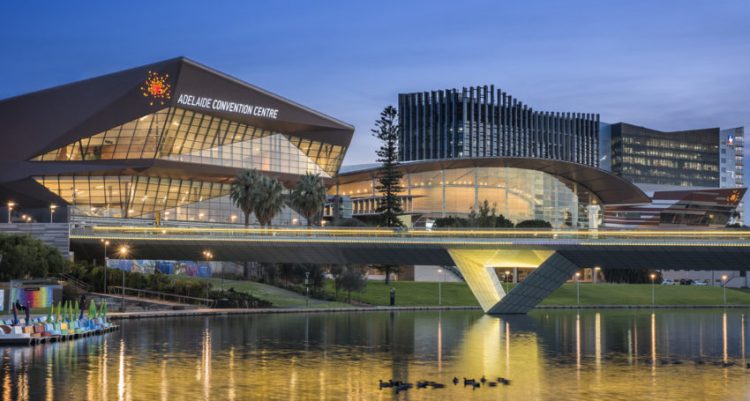 Parul Dubey on May 2, 2018 - in News, Projects
The fourth major building in the Adelaide BioMed City precinct – The University of South Australia’s Centre for Cancer Biology – is set to open this month while the $240 million SAHMRI 2 building, featuring the Southern Hemisphere’s first Proton Therapy Unit, is expected to open in 2020.

Their presence in the northwest corner of the Adelaide CBD follows the opening of the eye-catching South Australian Health and Medical Research Institute (SAHMRI), pictured below, in late 2013 and the completion of the new Royal Adelaide Hospital and University of Adelaide Health and Medical Sciences building in 2017. The transformation of the former rail yards on North Terrace has coincided with the $397 million redevelopment of the neighbouring Adelaide Convention Centre, which was completed in August 2017.

The centre became Australia’s first convention centre when it opened in 1987. The recent redevelopment has significantly increased its size, allowing it to bid for major conferences it previously couldn’t accommodate.

The centrepiece of the Adelaide Convention Centre revamp is a state-of-the-art 3000sq m Plenary Hall. With a 3500-seat capacity, the hall can be divided into more than 15 configurations to accommodate a wide range of conferences, exhibitions, banquets and other events.

These include the 38th Australian Dental Congress in May 2019, which could welcome up to 4000 delegates, and the Cardiac Society of Australia and New Zealand in August 2019. The CSANZ event will also be held at the centre in 2021 and 2023.

Adelaide Convention Centre General Manager Simon Burgess said the centre could not have bid for the Dental Congress prior to the redevelopment while the proximity to SAHMRI and its world-leading heart research had been crucial in securing the CSANZ deal.

He said having the health hub as a neighbour along the city’s Riverbank had led to an estimated 10 per cent increase in medical conference inquiries.

“If we could choose neighbours that’s what we would have chosen – the largest biomedical precinct in the Southern Hemisphere,” Burgess said.

“What it’s actually done is help us focus our research, specifically over the key themes they are focusing on.

“Any conference organiser coming here has the opportunity to work with UniSA and SAHMRI and the University of Adelaide or anyone in that whole precinct in terms of getting speakers, getting delegates and incorporating tours as part of the program.”

The key players in Australia’s medical technologies are at the Adelaide Convention Centre for the 12th AusMedtech Conference this week.

The conference includes more than 300 delegates, numerous international speakers and will be the year’s largest gathering of the medtech industry in Australia.

AusBiotech CEO Glenn Cross said Adelaide’s Riverbank precinct, which covers 380 hectares of land around the River Torrens in the centre of Adelaide, had the ideal mix of facilities for hosting medical conferences.

“In terms of Aus Biotech, we’re always pleased to bring our major conferences to South Australia, we think the convention centre and the precinct around it is world class,” he said.

Burgess said the revamped convention centre was running more conferences now than at any other time in its 31-year history.

“It’s definitely our moment to shine and we’ve got the momentum going forward – I don’t see any reason why that would arrest in any way,” he said.

“We’ll just be used to a new level of business and economic benefit generation, which is what we’re all about here.”

Comments are disabled
NEXT ARTICLE
Wärtsilä’s Support for Development of Bangladesh Continues with Another Power Plant Delivery
May 2, 2018
PREVIOUS ARTICLE
RIDOT Accepting Proposals for Mobility Challenge to Bring Autonomous Transit Service to Rhode Island
May 2, 2018