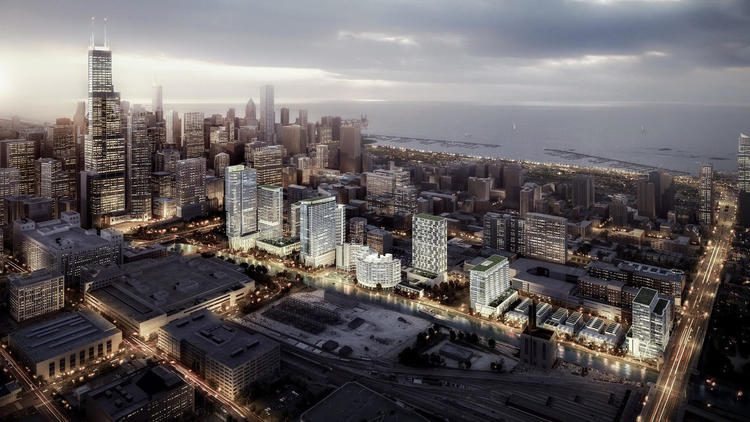 Less than two years after breaking ground on one of Chicago’s most ambitious residential developments, Riverline’s owners have split the $2 billion plan into two projects along the Chicago River.

The developments will continue to use the master plan designed by Perkins+Will, but each developer now will separately make decisions on financing, construction schedules and how to balance the mix of apartments, condos and other potential uses.

“In a lot of ways, we’ve accomplished what we set out to do,” Tom Weeks, executive general manager of development at Lendlease, said of creating the complex master plan. “This is a way to have each company realize the vision of the master plan, but to do so on their own terms and on their own time.”

CMK will keep the Riverline name for its parcel, which runs between Polk Street and Roosevelt Road along the east bank of the river, CMK President Colin Kihnke said.

Lendlease will market its project, along the river between Polk and Harrison streets, with a new name that will be revealed soon, Weeks said.

Weeks and Kihnke said they expect both projects to be completed within a decade of the September 2016 groundbreaking. The developers said the projects are expected to cost about $2 billion combined: $1.2 billion for Lendlease and $800 million for CMK.

It’s relatively unusual for joint ventures to split into separate groups while construction is ongoing. But projects of Riverline’s scope are also rare.

Kihnke compared the new agreement to the way Magellan Development Group has built up the 28-acre Lakeshore East residential complex, bringing in new equity partners and construction financing as it begins each new tower.

The breakup of Riverline is not the result of a conflict with Lendlease, which has been the general contractor for residential towers CMK has built on streets including South Michigan Avenue and South Wabash Avenue, Kihnke said.

“There’s a longstanding relationship, and a lot of respect,” Kihnke said. “Lendlease has built a tremendous amount of buildings for us, and we will certainly continue to utilize them in the future.”

The first building, a 29-story, 452-unit apartment tower at 720 S. Wells St., will be completed this summer. It is the first of five towers Lendlease plans on its site, which also will include a riverwalk, water taxi stop, kayak launch, parkland and walking paths.

Lendlease will consider apartments and condos for the four other towers — and perhaps some offices or hotel rooms, depending on demand, Weeks said.

Buildings also will include ground-floor retail. Lendlease’s total project calls for up to 2,700 residential units. The second phase of construction could begin by 2019, Weeks said.

Construction timing and the mix of units will depend on demand.

A record 4,350 apartment units were completed in downtown Chicago in 2017, with another 3,000 expected this year and 4,200 projected for 2019, according to Integra Realty Resources.

Strong rental demand last year and thus far in 2018 has calmed some fears of an oversupply.

Lendlease and CMK downplay the idea that forming neighboring developments will create too much competition for renters and buyers in a small pocket of the city.

Weeks and Kihnke said a flood of other big developments in the area — including Related Midwest’s plans to develop a 62-acre site just south of Riverline, a $500 million addition to the base of Willis Tower, an ongoing redevelopment of the old main post office and plans to redevelop Union Station — will only increase interest in the area just north of Chinatown.

“We’re really creating such a unique community that it really benefits both parties and the entire area,” Kihnke said. “All the large-scale development really solidifies us as the core of everything that’s happening around us.”