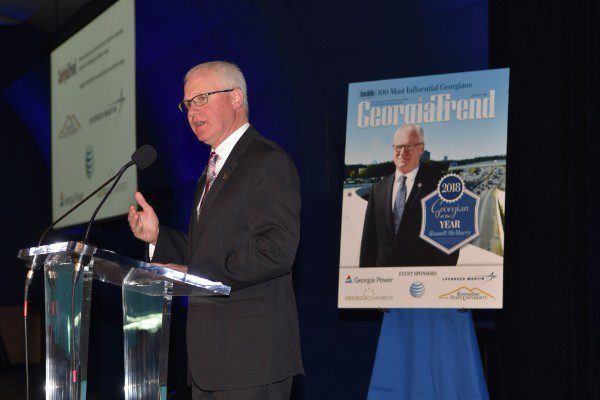 Parul Dubey on January 25, 2018 - in News, People
ATLANTA, GA – For his leadership in handling an emergency and addressing the transportation challenges of a growing state, Georgia Department of Transportation Commissioner Russell R. McMurry is Georgia Trend’s 2018 Georgian of the Year. McMurry was honored today at Georgia Trend’s Notable Georgians of 2018 luncheon.

A 28-year veteran of the Georgia Department of Transportation (Georgia DOT), McMurry has served as Commissioner of the Department since 2015. Among other responsibilities, McMurry is charged with finding transportation solutions that are crucial to the state’s continued economic growth.

“He is a work horse, not a show horse, someone who prefers to work behind the scenes making things happen,” said Michael “Sully” Sullivan, president and CEO of the American Council of Engineering Companies of Georgia (ACEC Georgia).  “It benefits everyone in Georgia to have Russell and his calm, steady, visionary leadership at the head of the department.”

Managing an annual department operating budget of $3.6 billion and a staff of almost 4,000, Commissioner McMurry is keenly aware of the crucial role that transportation infrastructure plays in Georgia’s economic competitiveness, and in strengthening economic growth in both the urban and rural areas of the state.

His vision for the Department has included a focus on innovation, improving the quality of life for Georgians and making the case for transportation financing that has brought about the most significant funding for the Department within the past decade. McMurry applauds the Georgia General Assembly and Governor Nathan Deal for passage of the 2015 Transportation Funding Act – a transformational piece of legislation that provides a sustainable funding source for the state’s transportation system.

“This is really a recognition of the men and women of GDOT and their ability to get so much done,” McMurry said. “I think of myself as one of the team members trying to make Georgia better every day.  I am very proud to be a part of this GDOT team.”

State Transportation Board Member Rudy Bowen, representing Georgia’s 7th Congressional District, introduced McMurry at the event.  “The Commissioner’s leadership of one of the state’s largest and most impactful agencies is one of the key drivers for Georgia’s ongoing and future success,” Bowen said.

McMurry is a native Georgian, an honors graduate of Georgia Southern University and a professional engineer who has been with GDOT since 1990.

Georgia Department of Transportation plans, constructs and maintains Georgia’s state and federal highways. We’re involved in bridge, waterway, public transit, rail, general aviation, bike and pedestrian programs. And we help local governments maintain their roads. Georgia DOT is committed to providing a safe, seamless and sustainable transportation system that supports Georgia’s economy and is sensitive to its citizens and its environment. Visit www.dot.ga.gov.  Follow us on Facebook (www.facebook.com/GeorgiaDOT) and Twitter (http://twitter.com/gadeptoftrans).