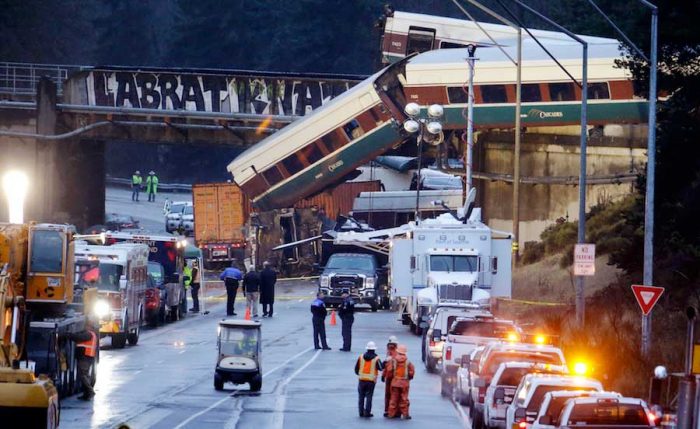 An Amtrak train operating from Seattle to Portland derailed on a bridge near Tacoma, Wash. on Monday morning, killing at least three people and injuring as many as 100. The Amtrak Cascades Train 501 was carrying approximately 78 passengers and five crew members, when it careened off an overpass onto Interstate 5 below, leaving one rail car dangling and one upside down.

Local officials said that several vehicles on the roadway were involved in an ensuing pileup, but no motorists were reported killed.

The National Transportation Safety Board (NTSB) is currently investigating the incident and has sent a 20-member “go-team” to the site, located about 20 miles south of Tacoma. A Washington State Dept. of Transportation (WSDOT) spokesperson says that the scene is still a “rescue operation” and it is too early to assess any damage to the roadway and bridge, or to pinpoint a cause.

The train, which left Seattle at 6 am and derailed at 7:40 am PT in Dupont, Wash., was on the first day of a new high-speed rail service using “bypass” tracks between Seattle and Portland, after “weeks of inspection and testing,” said WSDOT in a news release. The tracks were designed to carry trains at speeds up to 80 mph.

After emergency response is complete, and the NTSB has released the scene, the train will be removed from the interstate right of way. According to WSDOT, this “will be a lengthy process due to the severity of the incident and the size and weight of the train cars.”

Amtrak’s co-chief executive, Richard Anderson, told reporters on Monday that positive train control (PTC) was not in use on the tracks. PTC is a system that can automatically slow down a train if trouble is detected, by using GPS and sensors inside the trains and on the tracks.

Officials say the PTC system isn’t due to be activated until 2018.

The Amtrak Cascades train service is jointly owned by WSDOT and the Oregon Dept. of Transportation. Amtrak operates the service for the two states as a contractor, and is responsible for day to day operations. Amtrak Cascades runs trains from Vancouver, British Columbia, to Eugene, Oregon.

The tracks, known as the Point Defiance Bypass, are owned by Sound Transit. The tracks were previously owned by BNSF and were used for occasional freight and military transport.

WSDOT received federal grants to improve the tracks for passenger rail service in an estimated $180-million upgrade. As owners of the corridor, Sound Transit managed the track upgrade work under an agreement with WSDOT. Funding for the upgrades was provided by the Federal Railroad Administration.