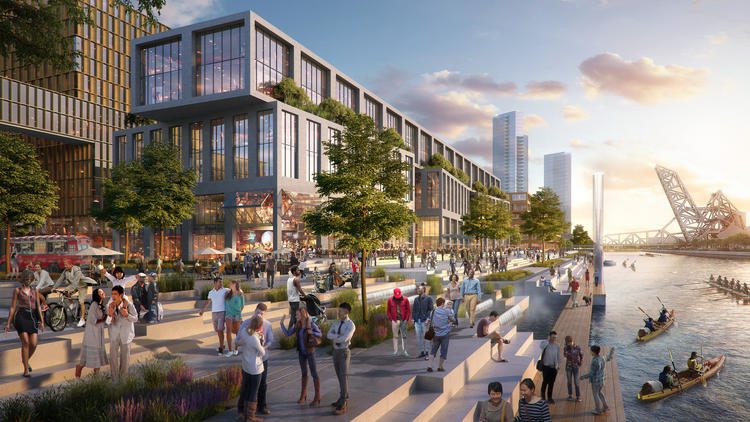 A developer has taken the wraps off one of the most ambitious real estate projects ever conceived in Chicago, laying out plans to construct 13 million square feet of buildings — including skyscrapers up to 950 feet tall — on a riverfront site connecting the South Loop and Chinatown.

Related Midwest presented the long-awaited design, which includes a 100-foot-wide walkway lined by restaurants overlooking the Chicago River, at the first public meeting on the project Thursday night.

The project, which the developer estimates could take 20 years and more than $5 billion to complete, has the potential to transform a sprawling riverfront parcel with a bumpy past.

The 62-acre former rail yard has remained vacant for decades under previous owners including Antoin “Tony” Rezko, the former fundraiser for imprisoned Gov. Rod Blagojevich who himself served a prison sentence for fraud and money laundering.

Related Midwest, which took control of the overgrown site in 2016, has a reputation and track record of pulling off complex developments. It is an affiliate of New York-based Related Cos., which is building 18 million square feet in the Hudson Yards mixed-use project in Manhattan.

But huge projects such as this one are difficult to finance and kick off, and — because they’re built in several phases — are the most susceptible to an economic downturn. The project also still needs city approval.

If Related Midwest sees through its ambitious vision, the site will transform into a city within the city that attracts thousands of office workers, residents, hotel guests, outdoor diners and river enthusiasts.

The developer envisions winter activities in the site’s expansive open areas, coupled with a long row of restaurants whose covered patios would accommodate outdoor dining throughout the year. It is modeled after waterfronts that draw large crowds in other cities, including Sydney and Oslo, Norway.

“This is a space we want to make available to everyone all year long,” said Curt Bailey, Related Midwest’s president. “Our anchor, our everything, is the river. So we have all these pathways and sightlines leading to the river.”

Related Midwest is calling the development The 78 — a reference to its sprawling layout, which it says is like creating a 78th Chicago community area. The property is bordered by the river, Roosevelt Road, Clark Street and Chinatown’s Ping Tom Park.

The 78 was one of five Chicago sites that Amazon toured in March as it considers cities for its planned second headquarters, or HQ2, where the online retailer said it plans up to 50,000 new hires. Conceptual plans for Related’s site could be altered to accommodate the specific preferences of Amazon or another large tenant.

The planned development, submitted to the city on Wednesday and designed by Skidmore, Owings & Merrill, would keep low-rise office and residential buildings closest to the river.

Low buildings with ultrawide floors, which Bailey describes as “sidescrapers,” would include open portions providing views of, and walkways to, the river. Retail, primarily restaurants, would occupy the ground floor of four wide buildings along the 5-acre riverwalk.

Farther east, multiple towers up to 950 feet tall would surround a 7-acre park curving along the path where the river ran until it was straightened to accommodate barge traffic in the 1920s.

A film by Related Midwest introduces Chicago to the city’s newest community area, The 78.

Access to the site also would be improved by the Wells Street extension set to begin this summer, as well as extensions of east-west streets.

Because of road work on Wells, Related will likely wait at least 18 months before starting construction, Bailey said. Related also plans to move existing Metra train tracks west of Clark Street, which would become more pedestrian-friendly and would be lined with tall towers.

A pedestrian walkway would be built over the Metra tracks. Related also is studying the feasibility and potential funding for a new CTA Red Line station at the intersection of Clark Street and an extended 15th Street, Bailey said. Related will seek public funding to cover infrastructure costs, the amount of which Related is still determining, he said.

“Once in a generation, Chicago has a project like this,” said SOM architect Phil Enquist. “The last one was Millennium Park, dealing with streets 30 feet in the air and active rail lines. Before that was Lakeshore East, figuring out how to build to Upper Wacker Drive.

“This has the same barriers of active rail lines and Roosevelt, which is 40 feet above ground level.”

Access to the site also would include pedestrian and bike paths, and Bailey said the firm also is exploring the possibility of having water taxis serve the site year-round.

The developer needs at least one major office tenant to begin the first phase of construction, which also would include residential buildings, Bailey said.

Related is talking with several potential office tenants, said Bailey, who declined to name them.

Related has continued talks with the University of Illinois and state officials about putting a U. of I.-led research facility, called Discovery Partners Institute, on the south end of the site, Bailey said.

The developer declined to estimate how many apartments and condominiums it plans to build on the site, but said it would create 20 percent affordable housing units on and off the site. Related would pay a $24 million zoning density bonus, and the project would create 10,000 construction and long-term jobs, Bailey said.

Related also envisions some type of entertainment along the river at each end of the site — potentially a water park to the south and an indoor-outdoor theater to the north.

Thursday was the first of two highly anticipated public meetings for Related. On Tuesday, the firm will for the first time present its plans for the Lake Shore Drive site where the 2,000-foot-tall Chicago Spire was once envisioned.