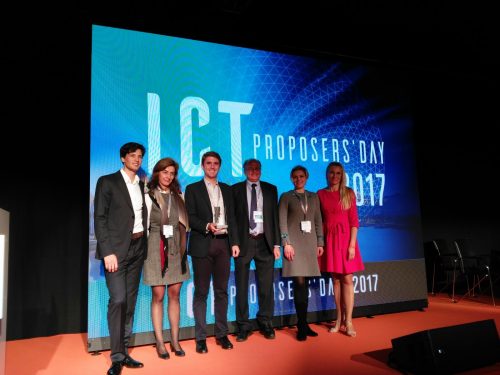 The 2017 Innovation Radar Prize has been awarded to CATEC, which is one of the major European research centres for drone technologies. The winner was announced at the European Commission’s ICT Proposers Day in Budapest, Hungary on 9 November. CATEC developed AEROARMS drones, within the EU-funded project that not only allows to “see” from air, but also to “touch and feel”. The CATEC drones will be used to perform industrial inspections (such as ultrasonic) that require contact. Using the drones will speed up the process of many tasks and creates safer work environments, as the users don’t have to work at great height anymore. Market expectations of EUR 300 million/year just in Europe motivated CATEC to patent its technology.

CATEC was named overall Innovation Radar winner, but winners were also announced in each of the five single categories:

The winner of the Excellent Science category is University College Cork from Ireland. Funded under the EU VIP project, the UCC team developed a new, simple and cheap platform of visualising many types of molecules from bacterial or human cells, to accelerate the development of medicines, or for use in novel diagnostics.

The winner of the Best Young SME category is LeanXcale, a Spanish start-up that created a next generation database management system. Within the EU-funded project LeanBigData, they developed a system that combines operational and analytical capabilities, delivering real-time Big Data.

The winner of the Best early stage innovation category is BLUMORPHO in partnership with CEA LETI. Brought together under the EU gateone project, they developed a sensor which will reduce the cost of Magnetoencephalography (MEG), an extremely accurate procedure of mapping brains, by a factor of 5.

The winner of the Industrial & Enabling Tech category is the Portuguese SME PLUX. In the scope of EU-funded RAPID-MIX project they developed BITalino, an innovative low-cost toolkit for rapid prototyping of wearable devices and biomedical signal acquisition. Their work is currently at TRL 9, comprising wireless hardware, multi-platform software, programming APIs, post-processing algorithms, cloud connectivity, and many others.

The winner for the Tech for Society category is amphiro, a spin-off company from ETH Zurich, Switzerland. With the support of the EU-funded DAIAD project they managed to develop an energy-autarkic smart shower monitor which allows users to keep track of their energy and water consumption using an app on their smartphone.

Lastly, a public vote of the audience in Budapest chose Onmi and ATC as winners of a special prize for the best pitch. Experts and professionals from the Enterprise Europe Network (EEN) offered their targeted support and advice for each finalist in the preparation of their pitches.

About the Innovation Radar Prize

The first stage of the competition took place over 4 weeks when the public could vote on the Futurium website for the innovators and innovations on the longlist that impressed them the most. Over 62 500 votes were cast by the public and selected the 20 finalists. The finale took place in Budapest, where a panel of 4 judges decided the winners on the basis of a 3 minute pitch delivered during a special pitching session at ICT Proposers Day.

European Commission’s Innovation Radar is a data-driven engine that aims to identify high potential innovations and the key innovators behind them in projects that have received investment from the EU’s 2007-2013 Research and Innovation funding programme (FP7), the 2007-2013 Competitiveness and Innovation Framework Programme (CIP), and Horizon 2020, the current research and innovation programme.

Since 2014 the European Commission’s DG CONNECT has been collecting a broad set of data about EU-funded digital projects. Leveraging a model, developed with the Joint Research Centre’s Institute for Prospective Technological Studies, DG CONNECT has been analysing this input to extract insights and intelligence about the best innovations and innovators.