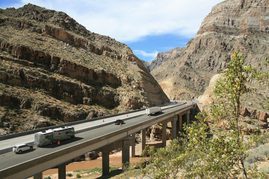 PHOENIX – A national industry group has honored the Arizona Department of Transportation’s $30 million rehabilitation of an Interstate 15 bridge through the rugged Virgin River Gorge in far northwestern Arizona.

The American Public Works Association selected the Virgin Bridge No. 6 improvement, completed last year, as Project of the Year among transportation projects worth between $25 million and $75 million, with ADOT as the managing agency, Pulice-Wadsworth Brothers Joint Venture as primary contractor and Jacobs as primary consultant.

“This award acknowledges the creativity and cooperation that went into making a critically needed improvement to a vital regional economic corridor,” said Dallas Hammit, ADOT state engineer and deputy director for transportation.

Upgrading the 50-year-old bridge was the centerpiece of $50 million in upgrades to the 30 miles of I-15 passing through Arizona, including paving the entire stretch and repairing the decks of three other bridges.

At Virgin River Bridge No. 6, crews replaced girders, decks and railings and widened the roadway. Accomplishing that required 4,000 cubic yards of structural concrete, 3 million pounds of structural steel, 910,000 pounds of reinforcing steel, 4,000 tons of earth moved and 3,600 tons of asphalt.

The project’s challenges also included the rugged, remote location. The bridge stands 100 feet above the Virgin River in a narrow canyon, requiring specialized equipment to work in tight spaces. ADOT and its partners also worked closely with agencies including the Bureau of Land Management, Arizona Game and Fish Department, Arizona State Land Department and Environmental Protection Agency to safeguard the river.

Among other honors, the Virgin River Bridge No. 6 rehabilitation has been named International Partnering Institute Partnered Project of the Year and has received the Marvin M. Black Partnering Excellence Award as part of the Alliant Build America Awards.