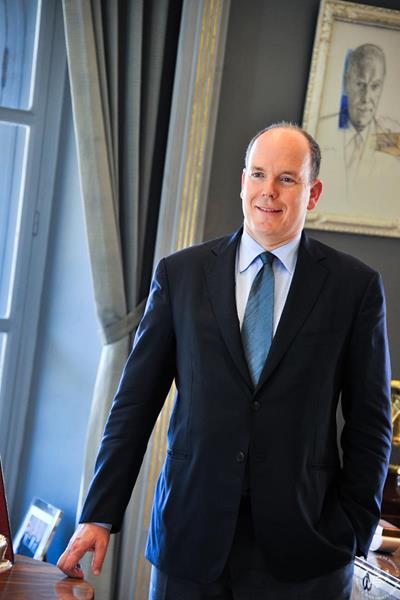 Avondale, PA – On the eve of Stroud Water Research Center’s 50th anniversary, the 2017 Stroud Award for Freshwater Excellence will be presented to His Serene Highness Prince Albert II of Monaco at The Water’s Edge, the Stroud Center’s premiere fundraising gala, on Sunday, September 17.

Wilmington Trust is the presenting sponsor of the event, which will take place in Delaware, at Winterthur, the childhood home of collector and horticulturist Henry Francis du Pont. This 1,000-acre preserve of rolling meadows and woodlands was designed by du Pont. Its 60-acre naturalistic garden is among America’s best, with magnificent specimen plantings and massed displays of color.

Prince Albert will be recognized for his commitment to freshwater resources through the Prince Albert II of Monaco Foundation. Though geographically small, Monaco is globally significant, and the Prince has used his worldly influence to promote bold environmental and ecological ideals.

Since its inception in 2003, The Water’s Edge has featured an impressive list of individuals who have made noteworthy contributions to the world of science, fresh water, and conservation. The inaugural year speaker was Jane Goodall. Starting in 2011, the Stroud Award for Freshwater Excellence has been presented to an individual or organization with outstanding achievements in freshwater-related activities.

An organization so unique, you won’t find another one like it in the country, the Stroud Center and its 50-year history began and continues on the banks of White Clay Creek in Pennsylvania. Today, the Stroud Center is an independent 501(c)(3), not-for-profit, nonadvocacy organization recognized as a global leader in the field of freshwater science, environmental education, and watershed restoration, with a secondary location studying tropical ecosystems in Costa Rica. Fifty years ago, it opened as a field station of the Academy of Natural Sciences of Philadelphia. The mission — to understand how streams and rivers work in an effort to preserve clean waterways and restore polluted ones — came from founders Ruth Patrick, Ph.D., an eminent freshwater ecologist at the academy, and philanthropists Dick and Joan Stroud.

Over the past five decades, the Stroud Center’s staff continues to diligently answer the question, how do streams work, through research, education, and watershed restoration.

The River Continuum Concept, originated at the Stroud Center, is the most highly cited research publication in the world related to stream and river science. Other notable highlights include:

Stroud Center scientists have tested more than 2,000 rivers and streams throughout the globe. In addition to the continuing long-term research projects in White Clay Creek, the Stroud Center is participating in research along the Delaware River, the Flint River, the Mississippi Delta, and rivers in Peru, Costa Rica, and Bhutan.

The Stroud Center’s award-winning boots-in-the-water environmental education program is a rite of passage for students from southeastern Pennsylvania, northern Delaware, and beyond. The education team serves more than 20 school districts and continues to grow. Additionally, the education department provides other professional development workshops and community outreach which will reach more than 7,500 individuals in 2017.

The Watershed Restoration Group merges the research and education departments by working with large-scale landowners and farmers to understand and mitigate their impact on freshwater systems while still maintaining their farming operations.

The founders strongly believed in sharing the researcher’s findings with the general public. The popular Science Seminar Series features free lectures that educate the public about important work in the world of fresh water. In addition to the two remaining lectures this fall, the Stroud Center still has many events planned to recognize the Stroud Center’s achievements over the past 50 years.

Visit www.stroudcenter.org/events to purchase tickets for The Water’s Edge, sponsored by Wilmington Trust, or another upcoming event. Executive Director and Research Scientist Dave Arscott, Ph.D., says, “From fabulous events to groundbreaking work in the world of freshwater science, the Stroud Center is working hard to ensure that the future of fresh water is bright.”