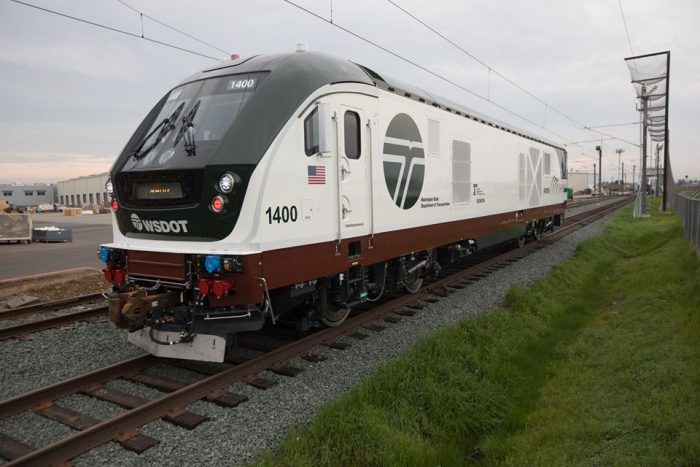 OLYMPIA – The first of the new Amtrak Cascades locomotives are in Seattle and ready for their debut as the new fleet prepares to go into service this summer.

The public is invited to get a sneak peek at one of these new machines Sunday, May 21, from 11 a.m. to 3 p.m. at Seattle’s King Street Station. The Siemens Charger locomotive on display will be stationary, allowing participants to see the exterior design close-up, as well as take photos and leave with a commemorative souvenir. Interior tours aren’t possible due to safety constraints, but displays will be available detailing these state-of-the-art machines.

The event will occur on a newly built platform at King Street Station that is part of the Washington State Department of Transportation’s upgrades to the track and signal systems at this busy station. Participants also can learn about other planned improvements to Amtrak Cascades service starting this fall.

The unveiling is planned before Sunday’s Seattle Mariners first pitch, giving families a chance to see the new train before taking in the game at nearby Safeco Field.

WSDOT purchased eight of the Siemens Charger locomotives for $59 million as part of a larger $800 million federal grant to improve passenger rail service. The locomotives will be used along the Amtrak Cascades corridor from Vancouver, British Columbia, to Eugene, Oregon. Amtrak Cascades is jointly administrated by WSDOT and the Oregon Department of Transportation.

The locomotives were built in America at the Siemens facility in California and are powered by 16-cylinder, 4,400 horsepower Cummins engines. The new locomotives meet the strictest Environmental Protection Agency emission rates and also have on-board positive train control safety features, higher acceleration rates and top speeds, and greater reliability than current locomotives.