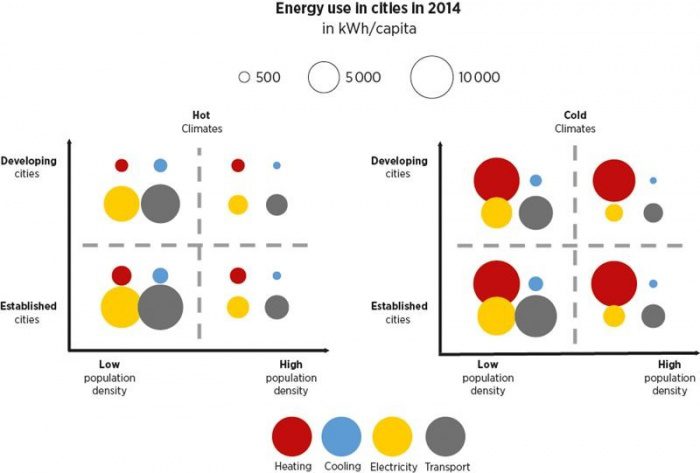 Quito, Ecuador, 18 October 2016 – Cities now have an unprecedented opportunity to transform and decarbonise their energy supply and use, according to a new report from the International Renewable Energy Agency (IRENA). Renewable Energy in Cities, released today on the sidelines of the Habitat III Conference in Quito, estimates energy use in 3,649 cities and explores their potential to scale-up renewable energy by 2030. It finds that while there is no one-size fits all solution, every city has massive potential to cost-effectively boost renewable energy use at the local level.

“Cities can play a transformative role in leading the world to a clean and sustainable energy future,” said Adnan Z. Amin, IRENA Director-General. “We have to rethink the entire urban energy landscape, which requires rigorous planning and holistic decision-making. Renewable energy, combined with energy efficiency, will power the future growth of cities. We must ensure this transition happens as soon as possible.”

Electricity use varies widely across cities depending on climate conditions, population density and development stage. Likewise, energy use for transport varies greatly depending on urbanisation models. Today, renewables supply only 20 per cent of this energy, but much more is possible. Renewable Energy in Cities outlines three priority areas – both in technology and in policy – where cities can take action to scale up renewables use: renewable energy in buildings (for heating, cooling, cooking, and appliances); sustainable options for transport (electric mobility and biofuels); and creating integrated urban energy systems.

Accounting for 65 per cent of global energy use and 70 per cent of man-made carbon emissions, cities must play a key role in the transition to a low-carbon economy. By highlighting best practice from cities around the world, the report shows what is possible and what policies are needed to enable the change. It also provides concrete examples of how city actors can accelerate the switch to renewable energy at the local level by acting as planners, regulators, financiers and operators of urban infrastructure.

“By 2050, urban populations are expected to double, making urbanisation one of this century’s most transformative trends,” said Mr. Amin. “Now is the time to grow with renewables, leapfrog dirty technology, and create cities of the future that people are proud to call home.”

Renewable Energy in Cities was released today in support of the United Nations Sustainable Development Goals and the Habitat III Conference taking place in Quito, Ecuador. Meeting every 20 years, this year’s Habitat Conference is focused on sustainable urbanisation. Within this context and for the first time ever, the Conference is discussing the proliferation of renewable energy as a means to achieve a sustainable urban future and common prosperity.

About the International Renewable Energy Agency (IRENA)
IRENA is mandated to be the global hub for renewable energy cooperation and information exchange by 149 Members (148 States and the European Union). 27 additional countries are in the accession process and actively engaged. IRENA promotes the widespread adoption and sustainable use of all forms of renewable energy, in the pursuit of sustainable development, energy access, energy security and low-carbon economic growth and prosperity. www.irena.org

To help drive the needed energy transition in cities, IRENA and the governments of Ecuador, Germany and the UAE hosted a full-day event on the sidelines of the Habitat III Conference. Titled RE-energising Cities: Renewable Energy in Urban Settings, the event shared cutting-edge information, highlighted examples of successful policy frameworks, and discussed priority areas for action to capitalise on the opportunities renewables present in urban setting. http://re-energising.org/Reenergising_Cities/