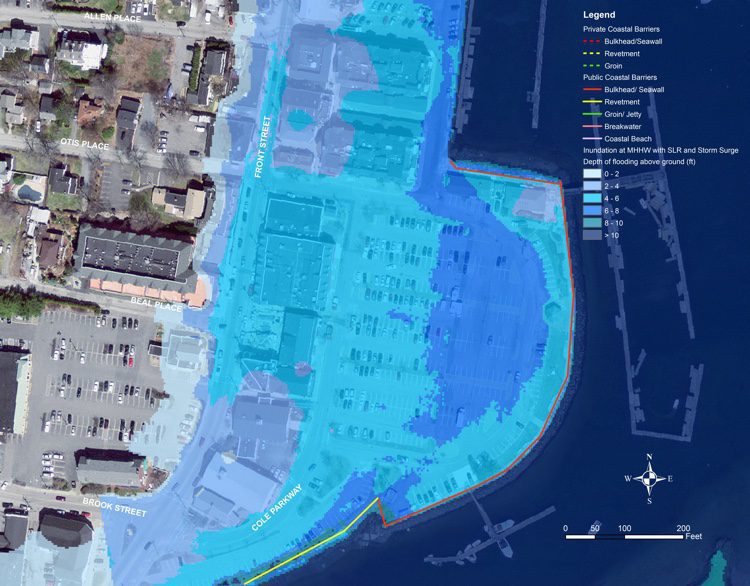 Across the country, government and industry leaders are taking a close look at the potential effects of climate change. What happens to people, buildings and infrastructure when extreme heat extends from a few days to a few weeks? When the one-in-100-year storm of today becomes the one-in-25-year storm of tomorrow? When sea levels rise above safe boundaries?

The answers to these questions and many others are neither quick nor easy. That’s why several agencies in the northeast have looked at climate-change science to identify potential threats and ways to best address the uncertainties resulting from climate change. These agencies are pioneering the development of climate-change preparedness plans based on comprehensive vulnerability and risk assessments. The preparedness plans do more than just outline potential risks—they’re fast becoming a practical guide to actions that can be put in place today to prevent climate-related disasters tomorrow.

The following story highlights how a few of these agencies—the Massachusetts Army National Guard; the City of Cambridge, Mass.; the Massachusetts Port Authority; and the District of Columbia—have taken a science-based approach to protecting their communities and infrastructure from Mother Nature’s growing force.

Scientific models define the basis to identify climate-change threats for specific locations and geographies. Climate scenarios are based on a combination of downscaled climate-change projections for precipitation, temperature, localized sea-level rise and storm-surge projections coupled with appropriate planning horizons. The models are developed and evaluated across defined planning scenarios; often near-term (approximately 5-10 years from present) and longer-term (e.g., 30-40 years from present).

Integrated flooding models help climate-change experts evaluate the combined impacts of inland and coastal flooding as well as provide a more-comprehensive model of storm events. Future flood elevations and depths are based on projected storms that increase in intensity and frequency. Projected increases in temperature are used to assess the impacts of increased urban heat islands by using a combination of GIS, Landsat data and other location-specific data, such as tree-canopy cover, percent impervious surface and elevation.

The next step is to assess the impacts of selected plausible climate-change scenarios as illustrated by GIS maps of projected flooding and heat on a community’s most-critical infrastructure assets. GIS then is used to analyze the primary impacts as well as cumulative and cascading points of failure to identify high-priority areas for adaptation. These cumulative and cascading impacts (assessed qualitatively and quantitatively) then are translated into vulnerability and risk scores for infrastructure assets and systems using a ranking system tailored for each infrastructure system. 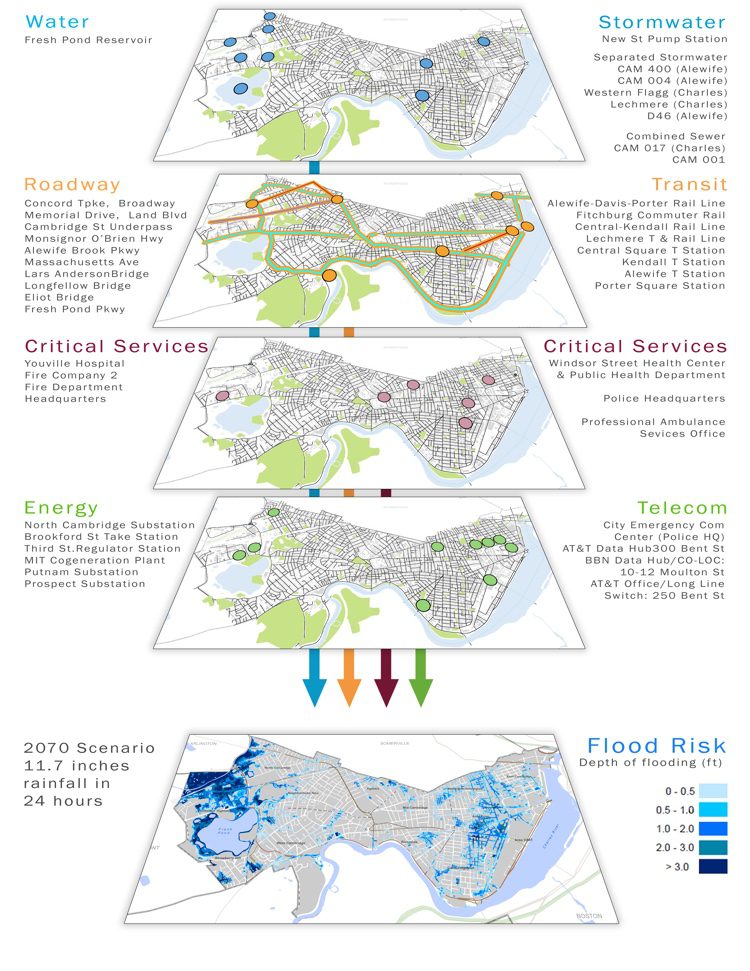 A stress test shows precipitation flood modeling for key infrastructure assets out to the year 2070.

The challenge is to translate the uncertainties of climate science to engineering and technical applications to minimize risk for future urban development and revitalization as well as protect critical facilities and resources while balancing tolerance to risk and allocation of funds and resources. Prioritization enables an organization to conduct a preliminary engineering/quantitative assessment of exposure and determine operational thresholds for early actions. The asset vulnerability/risk assessment provides a framework for adaptation plans to inform implementation and capital planning as well as evaluate the cost of adaptation and the associated risk-mitigation benefits.

Community vulnerability also is assessed based on a combination of income level, age, health proxies and other considerations such as language isolation and access to air conditioning. For example, a neighborhood with a larger number of senior citizens living alone could be grouped by census tract and ranked according to the extent to which residents could be impacted by extreme flooding and urban heat-island effects. 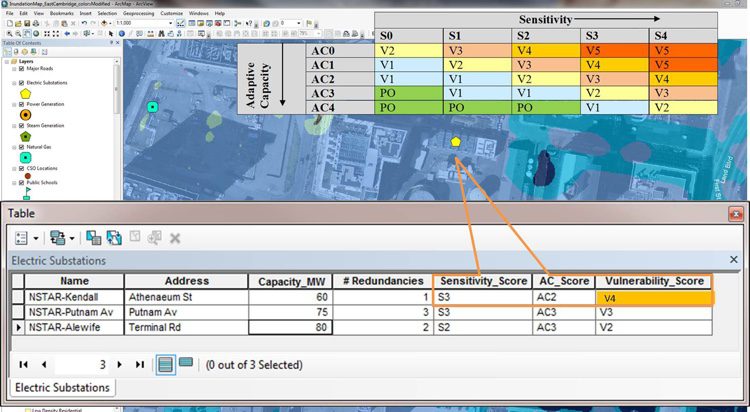 The Massachusetts Army National Guard (MA ARNG) was among the first to complete such a study several years ago. As part of its base master plan, MA ARNG initiated one of the military’s first climate-change vulnerability assessments at Camp Edwards on Cape Cod as a way to understand and mitigate operational, training and infrastructure challenges that could be caused by potential extreme climate events.

The 22,000-acre Camp Edwards National Guard Base, commonly known as the Massachusetts Military Reservation (MMR), is located in Barnstable County, a low-lying, coastal peninsula with fragile bridge connections to the mainland. Sea-level rise and storm surge are a primary concern. Kleinfelder conducted a climate-change coastal-flooding vulnerability assessment and prioritized adaptation solutions of these impacts with respect to infrastructure, training and operations at the base. The team focused on the estimated risk to infrastructure and facility operations, environment, training and test ranges as well as community and regional dependencies.

The effort identified at-risk infrastructure using a GIS-based sea-level rise and storm-surge inundation model and developed a climate risk matrix from which the Guard can prioritize and prepare adaptation and resiliency plans. For instance, the tenuous rail and vehicle bridge connections to mainland Massachusetts became a key concern. 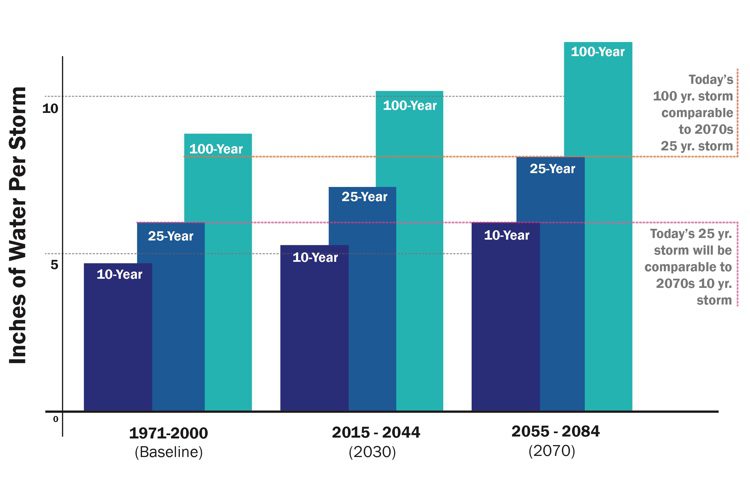 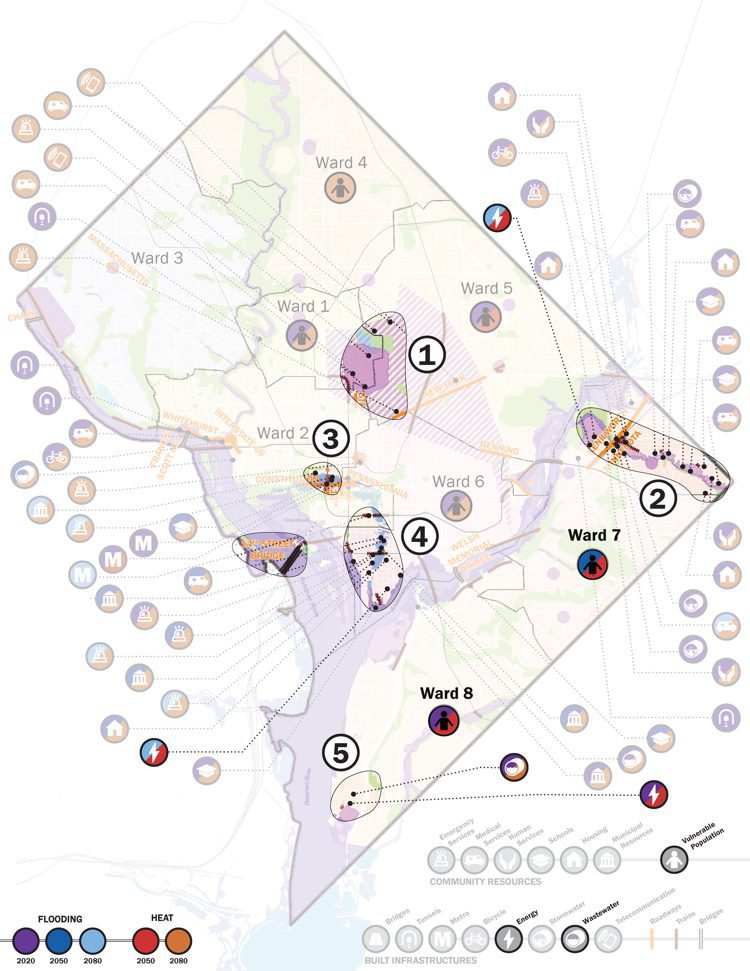 Soon after MA ARNG initiated its study, the City of Cambridge, Mass., initiated its own comprehensive and intensive vulnerability and risk assessment. In 2012, the City of Cambridge began working with Kleinfelder to develop a comprehensive Climate Change Vulnerability Assessment (CCVA). The consultant team was supported by a technical advisory group comprised of stakeholders as well as an expert advisory panel to confirm the project’s approach and methodology.

The team conducted a climate stress test on the city’s infrastructure, natural systems and population to assess the potential risks it could experience through time by changing climate that may threaten the built environment, public health and safety, the economy, and the city’s quality of life. The rigorous study evaluated the risks to people, buildings and infrastructure from rising temperatures, changing precipitation patterns and sea-level rise by 2030 and 2070. It also identified vulnerable facilities and systems as well as the likely cost to the local economy and the impact on public health and livability if no action was taken.

It also concluded that vulnerability isn’t evenly distributed throughout the city. People who are isolated due to infirmity, age or language and those with lower incomes are more vulnerable. A citywide event shutting down Cambridge is estimated to cause at least $43 million in daily economic losses from disruption of economic activity greater than the cost of property damage.

To ensure the city’s resources are focused on assets, systems and vulnerable populations most at risk, the team performed planning-level vulnerability analyses for nearly 1,000 resources, individual social factors, physical assets and critical services. A standardized methodology was applied to system (e.g., energy infrastructure) to rate its vulnerability and compare it to other items in seemingly disparate categories (e.g., energy infrastructure vs. public health) to assess interdependencies. The vulnerability-ranking methodology included quantitative and qualitative criteria. Additional assets and factors that will be considered in the future include food and fuel supply, food storage, food safety, health-care access and public safety. 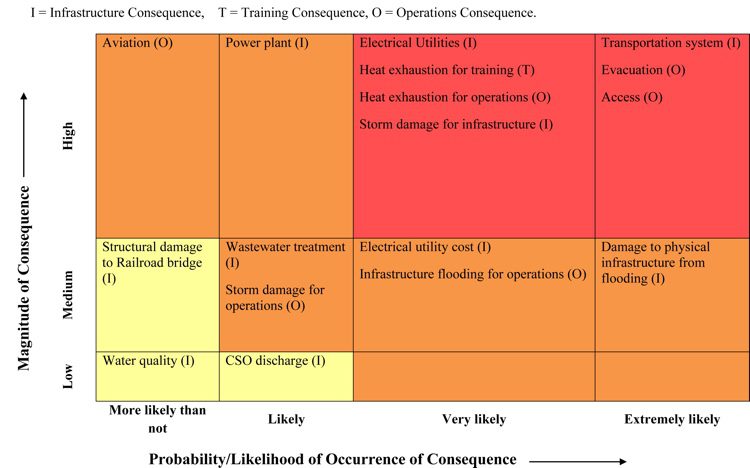 The team concluded that the potential cascading impacts of failure of different systems is a significant issue that the city could experience. For example, the loss of electricity may be the most-important factor leading to wide-ranging, cascading effects, because it can affect the availability of buildings’ heat or air conditioning as well as failure of the transportation system, communications or critical resources such as fire/police stations or hospitals.

The city now is taking a more-comprehensive approach to stormwater management and evaluating ways to better-protect critical assets and vulnerable populations in the event of extreme rain events or heat waves. The city also plans to develop a pilot neighborhood project in 2016, which will consider resilient strategies and revised design criteria for infrastructure improvements.

As the science of climate change evolves, the city will update its CCVA vulnerability assessment. For now, the assessment has deepened its understanding of how climate change is likely to affect social vulnerability. Through the process, Cambridge also learned that climate-resiliency strategies can’t be completed in a vacuum; problems and solutions require an awareness of the interdependencies with neighboring cities. Necessary relationships among the government, community organizations, institutions and the private sector have been established during development of the CCVA.

The CCVA is the technical foundation for the city’s first Climate Change Preparedness and Resilience Plan that will be updated during the next few years and serve as an important underpinning for the citywide plan, Envision Cambridge. The Preparedness and Resilience Plan will develop strategies to protect the most-affected assets, systems and populations.

Several other agencies have initiated or completed similar risk and resilience programs as the City of Cambridge. In the wake of extreme weather events such as Hurricane Sandy, the Massachusetts Port Authority (Massport) in Boston initiated a comprehensive hazard analysis, vulnerability assessment and resiliency action plan to evaluate how best to prepare for possible changes in sea-level rise, storm events, flooding, increasing temperatures and other climate-change impacts.

The hazard analysis leveraged current climate-change research to identify the critical vulnerabilities and risks to Massport facilities across short- and long-term planning horizons. The study also incorporated lessons learned from previous extreme events, such as Hurricanes Irene and Sandy, and Winter Storm Nemo. GIS was used to model the complexity of climate impacts, including synergies, conflicts and cumulative effects.

More recently, the District of Columbia’s Department of Energy and Environment (DOEE) undertook a study to develop science-based climate projections for the area as well as identify strategies and policies to adapt its infrastructure systems (e.g., buildings, transportation, energy and water systems, etc.) and critical resources (e.g., hospitals, schools, senior housing, etc.) to the changing climate. The plan builds on work underway across district agencies to improve community resilience and prepare for natural disasters, while factoring potential risks to vulnerable populations. One of the study’s main goals was for the district to develop an understanding of the common climate-change risk parameters that would be the same for many agencies, thus providing a solid base for an interagency, coordinated response to climate change.

The DOEE is in the process of completing its adaptation plan, which is already being used by critical infrastructure and resource groups to inform customized adaptation plans as well as rally stakeholders behind a shared baseline for climate projections and concerted adaptation measures.

Climate change is a growing challenge to public- and private-sector leaders. Planning is vital to preparedness as well as the mitigation or prevention of loss to the built environment and especially protection of life. For more information about the development of vulnerability and risk assessments and climate-change preparedness plans outlined in the story, please contact the authors.

Comments are disabled
NEXT ARTICLE
Overcoming Constraints for an Important Connection
May 31, 2016
PREVIOUS ARTICLE
Don’t Lose Your LID—Learn These Lessons for Effective Stormwater Drainage
May 31, 2016