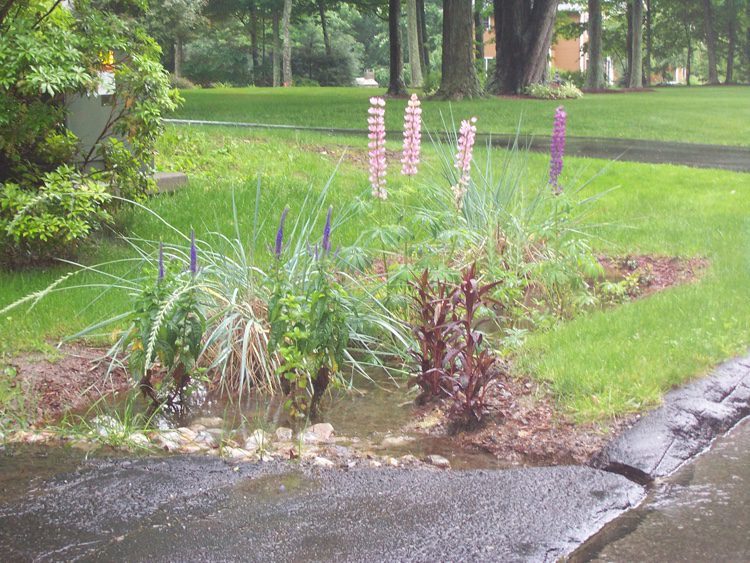 The concept of stormwater management under Low-Impact Development (LID) is fairly simple: it’s based on how nature handles rainfall in an undisturbed environment of meadows and woods. Nature works with simple concepts such as rainfall interception by the branches of a tree, which slows the velocity of a falling raindrop, which then lands on a soft bed of decaying organic matter on top of the soil. The organic layer further allows the rain to filter in and around the matter and then infiltrate into the undisturbed soil surface.

Bioretention (i.e., rain gardens) and permeable surfaces are among the leading LID practices. By mimicking natural approaches to rainfall, these infiltration systems should work flawlessly. Unfortunately, this isn’t always the case, and the real world is full of LID infiltration systems that have prematurely failed. 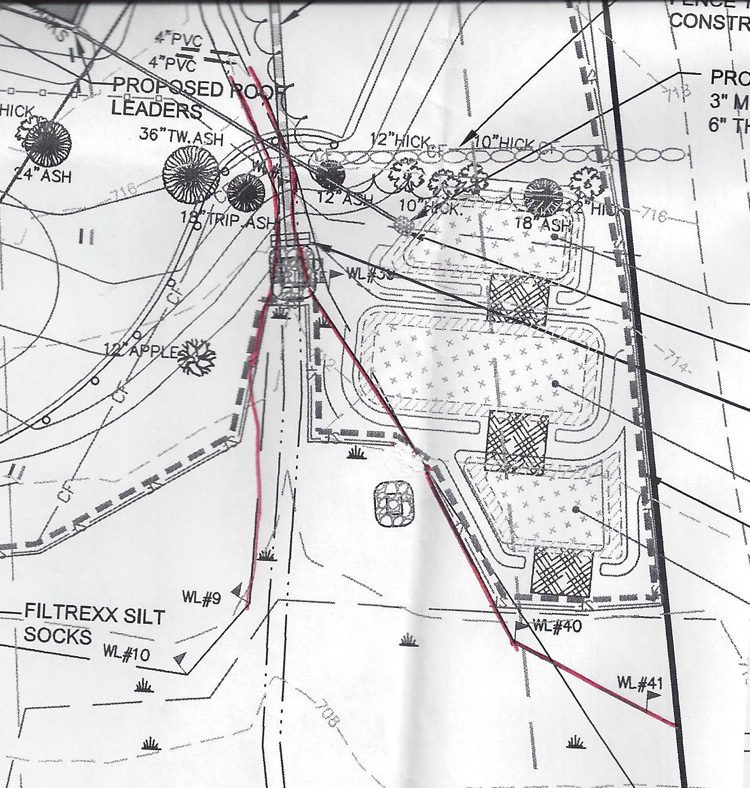 The success of a LID infiltration system starts with understanding the natural landform—they must be placed in soils that can infiltrate runoff, and local soil properties and hydrologic conditions must be understood.

Such understanding comes from the excavation of deep test pits to observe the soil profile, with a focus on evaluating the depth of the seasonal high groundwater (SHGW) level. The deeper the SHGW, the more suitable the area is for an infiltration system. It’s also imperative to perform an infiltrative test using a Double-Ring Infiltrometer to determine the saturated vertical permeability rate at just below the bottom of the infiltration system.

What Can Go Wrong?

The proposed rain gardens in Figure 1 are located partially in and adjacent to a delineated inland wetland soil, which is very poorly drained with saturation at or just below the ground surface. No soils tests of any type were conducted, so the designer would have no idea of the area’s soil properties. In addition, these rain gardens were designed so the top of the soil media was located 1.5-2.0 inches below the ground surface, guaranteeing the rain gardens would be full of water at the start and never function at all. 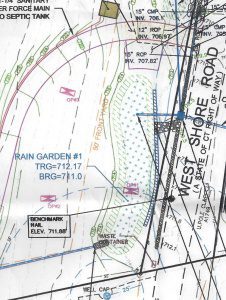 The proposed rain garden in Figure 2, although not near a poorly drained soil, has the top of its soil surface 2.5 feet below existing grade where there’s a compacted impermeable layer and SHGW located 1.5 feet below the ground surface. This system will be inundated with groundwater and also will fail prematurely. 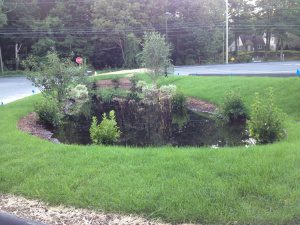 Figure 3 shows a rain garden installed into fill material over an underlying wetland area. Over a period of a week with two rainfall events, the depth of the ponding exceeded 18 inches and killed the upland plants on the bottom of the rain garden. The owner subsequently attempted to correct this issue by installing a perforated underdrain through the center of the system. The underdrain was located directly below the ground surface along the center low point, so water doesn’t pond, but the solution offers no treatment of the runoff from the adjacent commercial parking lot. 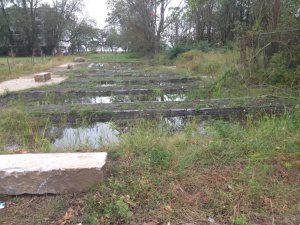 Figure 4 shows a series of bioretention systems installed as a demonstration project of how LID can work in an urban environment. Unfortunately, the top of the soil media was installed below the observed SHGW level, so all the systems immediately filled with water, and no infiltration or water quality improvement ever occurred.

In this case, a site investigation was done, and the civil engineer recommended raising the systems to provide a minimum 12-inch vertical separation from the bottom of the soil media to the SHGW level. Unfortunately, the principal in charge tried to address this issue by adding more soil in each cell rather than taking the civil engineer’s advice, resulting in a shallower visible ponding depth and more-saturated soil that has become host to native wetland plants.

Bioretention systems aren’t the only types that can fail from design, installation and maintenance issues. Figure 5 shows a permeable pavement installation built with no knowledge of the underlying soil conditions of a coastal environment in Connecticut. The permeable surface was installed on top of two layers of aggregate with an underdrain at the bottom of the aggregate. There’s no water-quality improvement or volume reduction, as the rainfall is quickly directed to the underdrain and discharged to the coastal environment.

It also was installed early in the project’s construction period, subjecting it to substantial construction traffic on a daily basis, with vehicles carrying soil on their tires that was deposited onto the permeable surface. In addition, no maintenance (e.g., frequent sweeping or vacuuming) was performed, so sediment built up and completely clogged the surface. These photographs were taken four years ago and, as of spring 2016, the clogging has substantially enlarged. 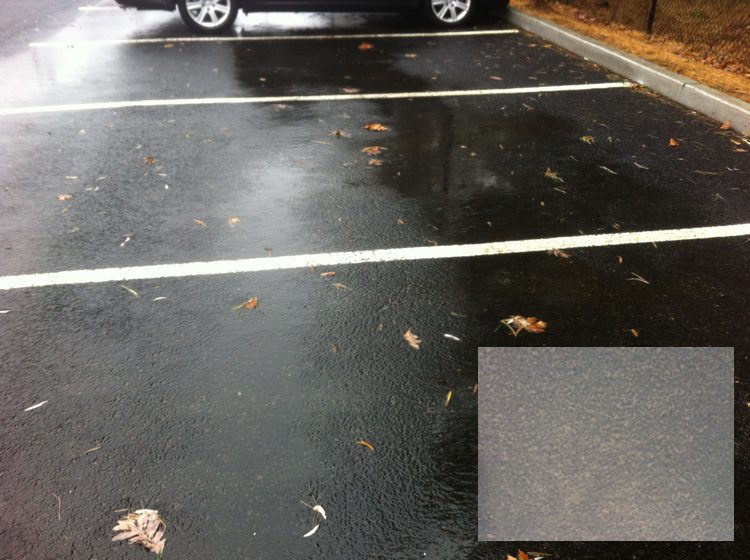 What Can Go Right? 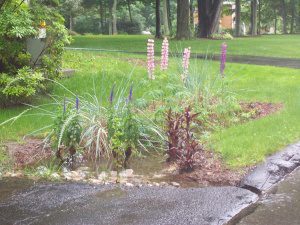 When a proper site investigation is performed, and the design is done by a professional with a thorough understanding of LID, the systems can function perfectly. Figure 6 shows a small bioretention system installed at the end of a residential driveway to treat and infiltrate runoff from approximately 2,800 square feet of road surface.

In this case, the homeowner dug a hole by hand to a depth of 36 inches and found well-drained sandy loam soils were present with no indications of SHGW. He proceeded to dig out the area, installed a soil media consisting of medium-coarse sand and well-decomposed wood chip mulch and planted it with native perennials. The system has performed flawlessly for more than 10 years, with proper maintenance being performed in the spring and fall.

Figure 7 shows a bioswale (linear bioretention system), installed to replace a riprap swale at the outlet of a drainage pipe, a few days after installation. 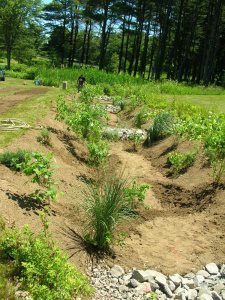 Figure 7. A bioswale demonstration project replaced riprap swale at the outlet of a drainage pipe.

Permeable pavement is another LID infiltration system that can effectively reduce pollutant loads if installed with a filter course consisting of bank-run sand and gravel. For a project located along a tidal stream (see Figure 8), the design focused on pollutant load reduction, and any infiltration into old fill material was considered a bonus.

Site investigation consisted of soil borings that found fill material approximately 30 feet in depth over original wetlands, as the site was filled back in the 1950s prior to Connecticut adopting inland wetland regulations. The permeable pavement was installed with a layer of sand and gravel on top of an aggregate layer, the latter to provide a fixed storage volume below the elevated underdrain to fully contain the required water-quality volume. The underdrain was located at the top of the aggregate layer to encourage infiltration into the fill material, which is occurring. When the photo in Figure 8 was taken, it had already rained 1.5 inches, and there was no discharge from the underdrain, which confirmed that infiltration was occurring into the fill material. 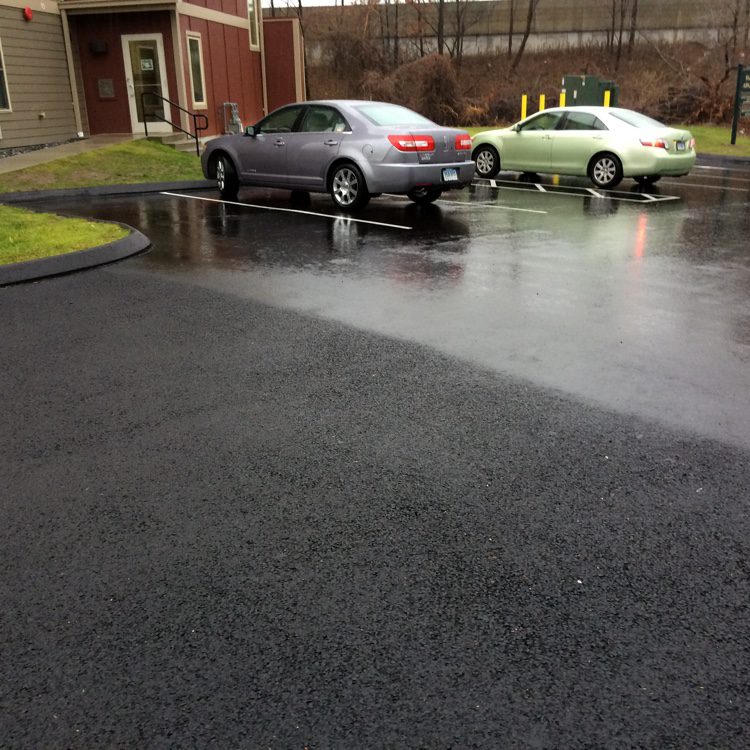 Maintaining vegetative LID infiltration systems, such as bioretention systems, is key to their long-term functionality. A great design and installation that’s not maintained will fail similarly to the aforementioned examples.

Maintenance of bioretention systems is simple, as these systems are effectively depressed landscape beds. Maintenance in the fall requires the removal of accumulated leaves as well as cutting back the vegetation and removing it from the facility. Spring maintenance involves removing accumulated sediment from the soil surface (if receiving runoff from a road or driveway), as the fine soil particles can clog the media surface, removing other organic matter and a simple loosening of the surface with a garden rake.

Maintenance of permeable pavement or porous concrete starts with a simple requirement: do not apply sand to the surface during winter operations. If sand isn’t applied, potential clogging of the infiltrative surface is virtually eliminated.

There’s a small caveat only applicable to porous concrete: as it takes a full year after installation to completely cure, the application of de-icing agents during the first winter season will adversely affect its structural aspect, causing it to slowly break apart. So for porous concrete, you can use sand on the surface during the first winter season only, but the surface should be swept or vacuumed after each and every application to minimize potential clogging. After the first season, only apply de-icing agents to the surface, and, based on research from the University of New Hampshire Stormwater Center, the amount of de-icing agents applied to a permeable surface can be reduced by up to 75 percent.

Normal maintenance of a permeable surface entails sweeping on a quarterly basis to remove any fine sediments and organic debris. If slight clogging occurs, then a regenerative vacuum may be used to loosen and remove accumulated sediment from the porous concrete.

LID infiltrative systems, when properly designed, installed and maintained, are very effective at reducing pollutant loads and reducing runoff volumes by infiltration. However, without a comprehensive understanding of site conditions as well as appropriate design and installation, these systems can quickly fail.

Steven D. Trinkaus, PE, principal at Trinkaus Engineering, has been providing civil engineering services for more than 27 years to private and public clients.