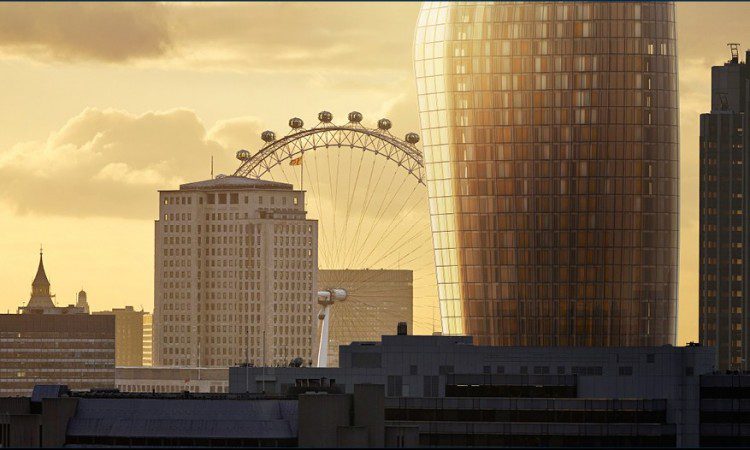 London’s leading property developer, St. George PLC, retained SimpsonHaugh Architects to fulfill a vision for mixed-use development at the junction of Blackfriars Road and Stamford Street at the head of Blackfriars Bridge in the central London borough of Southwark. The award-winning practice, ranked among the largest and most influential in the United Kingdom by Architects’ Journal, designed the GBP 250 million signature skyscraper One Blackfriars using GenerativeComponents, Bentley’s parametric modeling software, to set out the curved geometry of the building form, and define the relationships between internal and external facades. The 170-meter tower joins a sequence of landmarks along the Southbank of the River Thames, where its minimal footprint and slender profile allow it to rise skyward without overshadowing its neighbors.

One Blackfriars presents 74,925 square meters of prime space for a 152-room boutique hotel and 274 luxury apartments, as well as retail shops, restaurants and bars, a health and fitness center, community viewing lounge, and underground parking. The site also makes space for a landscaped public piazza. Targeting ambitious performance standards for sustainability and energy, the tower was designed to Code for Sustainable Homes (CfSH) Level 4 whilst the hotel was designed to Building Research Establishment Environmental Assessment Methodology (BREEAM) Rating Very Good.

Being a Good Neighbor

In an age of austerity and popular criticism of the contemporary tower form, the introduction of another sculptural skyscraper to the Central London skyline could have been controversial. One Blackfriars achieved the balance between form and function to earn its place on the cityscape, but not without a struggle. Conceived in 2004 as a hotel-led tower, the concept for One Blackfriars eventually earned community approval and planning permission, having been tested during a public inquiry in 2008 where they were responsive to public feedback.

To stand the test of time, the tower design needed to address form, scale, proportion, as well as deal with the recurrence of element repetition. Moreover, it had to provide a contextual response to the particular place. The No. 1 challenge was to establish a base at the bottom of the tower on the site without obstructing the daylight of neighboring properties. At the same time, SimpsonHaugh had a responsibility to fulfill numerous functional pragmatics of the original program. Finally, the building had to be beautiful from every aspect.

The final tower design marks the southern bridgehead of Blackfriars Bridge and is a gateway to Southwark. SimpsonHaugh conceived a thin form with “shoulder blades” on the east and west elevations that reduce its apparent width. To develop the design for this flaring shape, SimpsonHaugh developed a set of innovative tools based upon existing applications such as GenerativeComponents, Bentley Architecture, and other software that integrated with the core Bentley applications. The aim was to use the technology to deliver the scheme with fewer people, in less time, and with fewer errors due to reworking or inaccurate coordination. 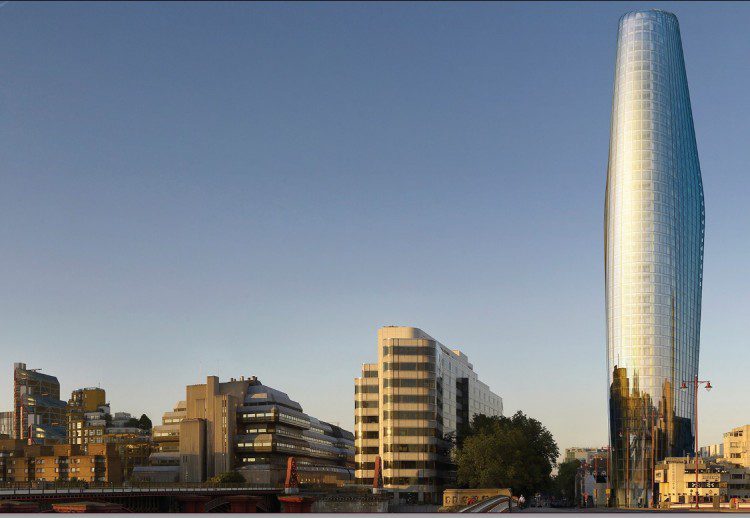 View of the proposed development from the north over Blackfriars Bridge, illustrating the double skin concept and curved form of the tower. Image by Hayes Davidson.

Building within a Building

SimpsonHaugh  benchmarked its existing processes, team structures, and uses of technology against best practices in architecture, engineering, and other industries. For example, the design and manufacture of boat building and luxury yachts inspired the development of the building canopy. Bentley applications provided a solid platform for parametric modeling and building information modeling (BIM). SimpsonHaugh customized and enhanced the available scripts and tools to push the boundaries of what could be achieved.

The design created a double-skin façade, where the outer leaf is a substantially transparent glass surface that traces the curved geometry of the envelope. The solid elements of the more orthogonal inner leaf are colored to overlay the interior volumes with a subtle variation of rendering that lightens as the building extends skyward. The building-within-a-building concept resulted in an outer skin comprising 5,496 panels – each one different from the other – including flat, single and double curved. The inner skin provided thermal lining and opacity. The building breathes through the skin, so ventilation and solar gain had to be quantified and accommodated.

SimpsonHaugh quickly realized that the parametric model could be used to provide more than the initial building form. Development of the model allowed the team to explore the relationship between the inner and outer glazing systems, internal spaces, structural column positions, and other systems. For example, SimpsonHaugh used the model to investigate and rationalize the geometry and manufacture of the outer façade, the coloring of the glazing schemes, and the size of the shadow gaps between façade panels.

“By integrating a parametric workflow within our traditional BIM and 2D processes, we have been able to investigate and resolve a number of unique design issues and respond very quickly to the aspirations and requests of the client, all with a small design team.”

Panel types, analysis model, and façade zones were entered into the 3D surface model. The analysis model of the structure – comprising points, lines, and meshes – was imported directly into analysis software used by the project’s structural engineers, WSP Building Services. The results were then fed back into the parametric model, which ensured consistency and accelerated the collaborative process.

Aret Garip, WSP Building Services, said, “Bentley 3D modeling tools enabled efficient exchange of information between architectural and structural models. We were able to directly import complex building geometry into our structural analysis packages with ease. It helped us to explore many structural solutions quicker than other methods. It also provided an effective coordination tool among our teams.”

The parametric model was also imported into the building information model in Bentley Architecture, allowing the team to generate detailed schedules and general arrangement drawings. In addition, the parametric model was used to draw, annotate, and dimension the elements related to the facades and the setting out of the structural slabs and frame. The team used MicroStation® to develop details and assembly drawings based on dynamic views extracted from the model.

The 3D model of the external façade contained crucial information on the façade zones, panel geometry, curvature, warp, inclination, skew, stack joint group, stack joint deviation, glass wastage, and pinstripes. This information was then made available to contractors as editable files, which helped to explain the complexity of the design.

One particularly challenging aspect of the tower design was the tower cap, where façade mullions lie on a plane defined by the façade joints. The transom planes were set on a best-fit geometry segment by segment, so that they are nearly perpendicular to the glass surface.

Many innovative design options explored within the virtual environment would never have been considered, much less developed for buildability. Complicated tasks that might have been insurmountable in the past were not only completed but delivered within very short timeframes. For example, it took just two days instead of weeks to produce visuals for viewing angles from each and every apartment.

As the main collaborative tool for the key disciplines on the project, the parametric model saved both time and money by simplifying data exchange and producing a model format that could be easily imported into various analysis packages. This completely eliminated redrawing and double-handling of data shared among design disciplines.

Using Bentley’s generative design software allowed the project team to deliver a complex façade system that might not have been possible otherwise. GenerativeComponents allowed SimpsonHaugh to fine tune the façade to reduce the number of panels and minimize the number of double-curved panels. These measures had a direct impact on cost savings. Architects Matt Smith and Ralf Lindemann, SimpsonHaugh’s computational designers, noted that GenerativeComponents gave them the ability to:

Toby Clark, a member of the Arup Facades engineering services team, said, “The team at SimpsonHaugh delivered one of the most comprehensive documentation packages we have seen. Taking our advice, the façade was modeled, detailed, and documented to clearly show the complexity of this unique building using the latest in parametric tools and BIM software. One Blackfriars is a truly outstanding job that will set a new benchmark in delivering complex facades.”

Though some were skeptical that One Blackfriars would be built, the ground-breaking ceremony in October 2013 marked the start of construction, which is expected to be completed by 2017. With a mix of residential, commercial, and retail properties, One Blackfriars represents a significant investment by the developer. The 50-storey tower is now being marketed worldwide.

Patricia Pham leads the marketing strategy and positioning for Bentley’s building design and analysis products. She has more than ten years of experience in marketing and business development for technology, digital marketing, and engineering companies.