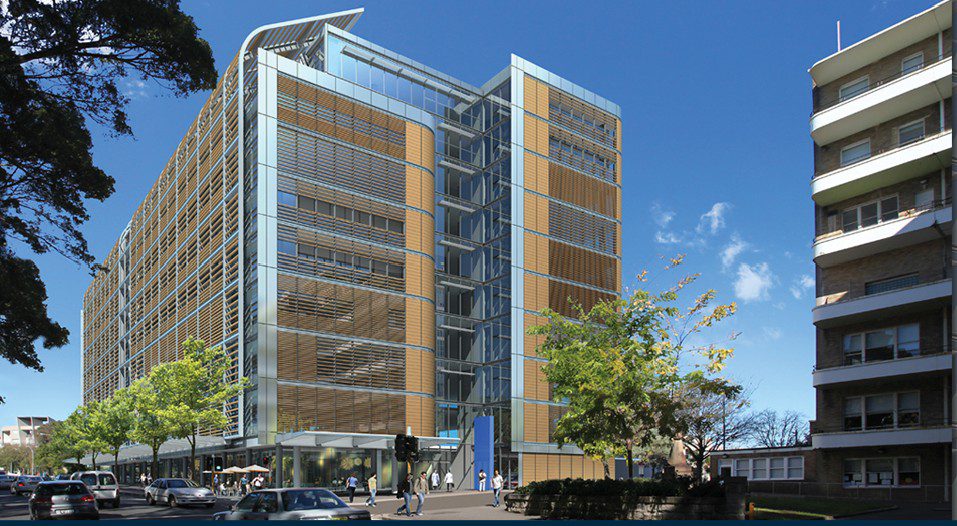 When Gerard Outram, CEO of Building Studio, founded his business in 2007, he did so with an eye to the future. “As a start-up business owner, I knew the 3D world was a wave of the future and Bentley offered a great platform to help Building Studio meet our vision.

“Over time, we’ve moved to new iterations of Bentley’s 3D design software – AECOsim Building Designer – and it’s been a fantastic platform for growing our business.”

Based in Sydney, Australia, Building Studio uses Bentley software to design and deliver complex buildings for corporate, institutional, and government clients. The company is well known for producing creative, rigorously tested solutions that meet each client’s unique needs and aspirations. To date, the company’s 20 employees have used AECOsim Building Designer – and, more recently, ProjectWise – to design, document, and build more than 90,000 square meters of buildings.

Investing in Productivity and Innovation

Outram knows the value of Bentley’s platform having spent 12 years working with it alongside competitor products, which gave him a solid basis for comparison. “With Bentley’s 3D software we could innovate faster and achieve a very high level of productivity. AECOsim Building Designer’s BIM workflow also enabled us to creatively explore design opportunities knowing we would have seamless integration with the document production workflow. When I considered my personal productivity using different tools, I consistently got better results using AECOsim Building Designer. So, from that point of view, there was no question which design software I wanted to deploy.”

But Outram considered other factors as well, such as how the product worked technically and the total cost of ownership. “I really liked the federated data model built into Bentley products,” he explained. “Construction projects contain an enormous amount of data that places significant demands upon IT systems. I knew that when starting my business, I couldn’t make the investments in heavy-duty servers needed to achieve the performance levels we’d need using software based on a single database. Bentley’s federated model offered a great solution that could get us started and grow with the business.”

He also knew that Bentley offered the most sophisticated 3D modeling capabilities and visualization tools. “We could quite literally model anything – and not be limited in any way by the software,” noted Outram. “At the same time, we could quickly reel off 10 or 20 different renderings of various views of a design – good quality images that really help clients understand the design and feel like they are a part of the design process.” Without AECOsim Building Designer, Building Studio would need to use separate teams to create 2D drawings, 3D models, and lastly the renderings, which would involve a much more labor-intensive process. 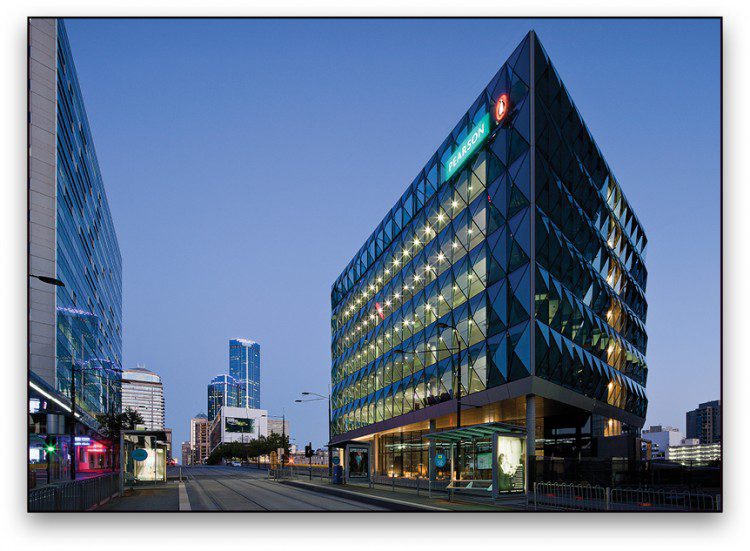 Located on Collins Street at the gateway to Melbourne’s Docklands precinct, the Lantern Building is a landmark development with striking facade design.

With AECOsim Building Designer deployed across the business, Building Studio has been able to work faster and win far bigger, more challenging projects than would be expected from a young company. For example, one project Building Studio won was a research center for a university in Sydney. “We were approached by one of Australia’s biggest tier-one contractors to redesign a 45,000-square-meter biology research building,” commented

Outram. “We used Bentley software to model every space and feature of the building and create the plans and images that convinced the university our alternative proposal was the best way forward. We were able to solve the architectural and technical problems that were driving up the cost and complete the design within budget, and deliver 3D documents proving it. We ultimately won the contract as a result. Even though we are a small firm, Bentley’s platform enables us to produce the number of documents of a larger firm – and compete against those firms successfully.”

In many cases, Building Studio projects involve collaborating with large contractors and other third parties. Stated Outram: “With AECOsim Building Designer, collaboration is simplified in part because we can easily import third-party design files and translate them into a readable format. Exporting to other platforms is also easy via the IFC export interface.”

AECOsim Building Designer has also delivered expected benefits in terms of higher design quality and productivity. “In my previous experience, it would take two to three people to complete the design and documentation of a 7,500-square-meter building using a 2D methodology,” explained Outram. “But when we did our first project of this size using AECOsim Building Designer, it took just one person six weeks to complete the developed design. During construction documentation the productivity gains were also extraordinary – and they continue to be.”

Building Studio also sees far fewer errors on site because of the quality of the BIM models the team can create. Outram explained, “I can run a smaller team during the site review process by leveraging our model to complete the job down to the smallest detail.” For example, the Lantern Building project, which involved additions to and reutilization of a heritage building almost 150 years old, required installation of an eight-meter-high suspended glass wall. With an accurate survey provided by the contractor, the design team modeled the heritage building, the glazing, and all supporting steel work within a structural tolerance of less than 20 millimeters. These components were manufactured offsite, delivered, and installed with no cutting or errors. “AECOsim Building Designer enabled us to model this high-risk aspect of the project precisely and ensure the construction went beautifully,” noted Outram.

Over time, Building Studio has taken on increasingly complex projects – and modeled them to a greater level of detail. “This has enormous benefits in terms of the quality of our design and documentation, but at a certain point, we reached the performance limits of our hardware,” explained Outram. “I bought the fastest servers, networking switches, gaming work stations with solid state disks, fast RAM, and graphic cards – all pushing the limits of Intel specifications. And yet the complexity of our models, which is what makes them so useful for us and our customers, was slowing down the whole process.”

So Outram decided to work smarter, using ProjectWise. “We deployed ProjectWise because it handles data files in a different way,” he explained. “It caches the files on local workstations, which significantly improves drawing load and opening times.” For example, file opening times were reduced from three minutes to 30 seconds. The time savings alone – replicated hundreds of times a day for each designer – recoups between two to three hours each day as productive work time. The alternative – making sure BIM models are lightweight – requires running two design teams: one that creates the BIM model and another that creates drawing sheets using a traditional 2D process. But this means also losing the productivity and design coordination benefits of BIM. I wanted to ensure we realized the full benefits of BIM provided by AECOsim Building Designer.”

Taking Collaboration to the Next Level

The internal productivity gains offered by ProjectWise are just the beginning for Building Studio. “We have a vision for ProjectWise as the central information hub enabling collaboration in the cloud with third-party resources and customers thus helping Building Studio expand. With ProjectWise, the actual drawings designers create can now be stored in the cloud for easy collaboration. At the same time, we can give clients, contractors, and other stakeholders secure, highly controlled access to the drawings, without having to repost the files to another system,” commented Outram. “This saves us time and effort. The workflows built into ProjectWise allow us to control what people see, how they see it, and how they use it. For us, this is a huge competitive advantage relative to firms using a more traditional information sharing process.”

With projects characterized by great design, exceptional speed, quality, and innovation, Building Studio has earned a rock-solid reputation. “We are proud of the consistent, really good feedback we receive from clients. It feeds a circle of happy employees, contractors, and supporting consultants. The efficient BIM solution provided by Bentley really underpins all aspects of our work,” stated Outram.

Gwyn is a marketing and communications professional with ten years of writing service to varied clientele, taking complex information and delivering compelling and persuasive communications.