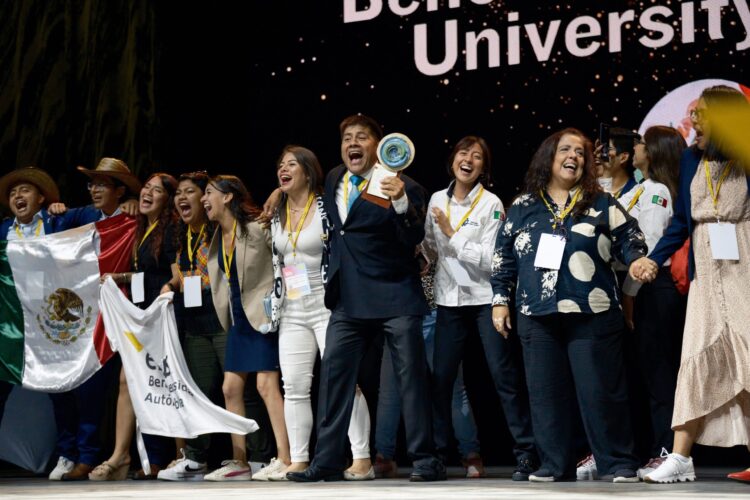 One of the products developed as part of the CPlantae initiative is WormPod, a biologic wastewater treatment system comprised of aquatic plants and earthworms. WormPod is an easy-to-install, prefabricated system that can be used by individuals or scaled for commercial application. For a brief overview of how it works, watch the team’s summary video here.

To date, the Enactus Benemérita Autonomous University of Puebla team has installed 60 WormPod systems and treats more than 200,000 liters of water daily. Asked how he feels about winning the 1 Race 4 Oceans Impact Race Competition, Enactus student José Robles says he is “so proud of being Mexican and show[ing] the world how we care about the most natural resource we have, water.”

1 Race 4 Oceans is a yearlong program in which Enactus student teams advance United Nations’ Sustainable Development Goal 14: Life Below Water, with a focus on tackling systemic issues contributing to ocean pollution or the destruction of coastal and marine habitats. In addition to 1 Race 4 Oceans, Enactus offered three other Races during the 2021-2022 year: the Race for Climate Action, the Race to Feed the Planet, and the Race to Rethink Plastic. During the year, The 1 Race 4 Oceans projects advanced to a top-twelve field which was further winnowed to a top-four group. These finalists participated in a juried competition at Enactus World Cup.

At Enactus World Cup, students compete, collaborate, make intercultural connections, and are inspired to further develop skills that foster social entrepreneurship. The Enactus World Cup and the Impact Race Competitions are the culmination of a year or more of innovation by students launching social enterprises as part of Enactus, the world’s largest experiential learning platform preparing the next generation of leaders to achieve the United Nations’ 17 Global Sustainable Development Goals (SDGs). The 2022 Enactus World Cup, which took place in Puerto Rico from 30 October – 2 November, was attended by over 3,000 people, supported by over thirty local and global businesses, and is estimated to have generated over $4 million for the Puerto Rican economy, according to Enactus Puerto Rico Country Leader Rody Rivera Rojas.

About Enactus
Founded in the United States in 1975, Enactus is the largest experiential learning network that prepares the next generation of leaders to advance the United Nations’ 17 Sustainable Development Goals through social entrepreneurship and innovation. Through its international network of business, academic and student leaders, the organization provides a platform for students to develop leadership and career readiness skills while working with prestigious organizations worldwide. In 2021, Enactus students in 35 countries positively impacted 11.6 million lives through their social innovation projects and helped launch 1,626 small businesses, advancing the 17 United Nations’ Global Goals. For more information visit www.enactus.org.