/ News / How cover crops can protect the Chesapeake Bay

How cover crops can protect the Chesapeake Bay 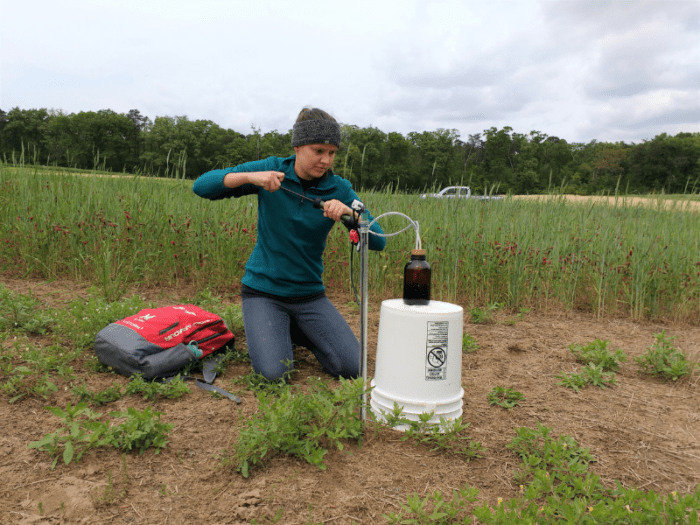 The Chesapeake Bay once produced tens of millions of bushels of oysters a year. Today, the oyster harvest is below one percent of these historic highs.

“With modern farming and urban development in the watershed around the Bay during the mid-20th century, water quality declined rapidly,” says Ray Weil, a professor of soil science at the University of Maryland. “Soon the oysters disappeared, many of the fish nearly went extinct, and the crabs were threatened.”

Weil studies ways to help the Chesapeake Bay recover. His research focuses on one of the key culprits in the bay’s decline: nutrients. Key plant nutrients like nitrogen and phosphorous, are good for crops, Weil says. “However, in waterways, nitrogen also stimulates the production of plants. In this case it’s aquatic weeds and algae,” he says. All that extra biomass dies and rots, removing oxygen from the water. Lack of oxygen in the waters is a major threat to life in the Chesapeake Bay. In addition, some algae can be toxic to people and fish.

While the Chesapeake Bay has lost some of its luster due to nutrient challenges, it still provides many benefits to nearby residents. It is the second largest estuary — a habitat of brackish water — in the world. The bay itself is roughly 200 miles long. But its watershed covers 64,000 square miles across six states and Washington, D.C. About 500 million pounds of seafood are harvested from the Bay each year. The habitat also cleans water while providing breeding grounds for important wildlife.

To help their struggling waterway, Maryland residents voted to tax themselves to provide incentives to farmers to grow cover crops. These crops that farmers do not sell, but can hold onto excess nitrogen, keeping it out of waterways.

In Weil’s latest research, he studied how the timing of cover crop growth affected their ability to keep nitrogen out of the Chesapeake Bay water. Cover crops are typically planted late in the year after farmers have harvested their cash crops. However, his lab’s previous research indicated that this was probably too late for cover crops to capture enough nitrogen to be effective. The key metric is how much nitrogen drains through the soil to groundwater; a process known as leaching.

“Essentially we thought that the critical nitrogen capture action takes place before winter dormancy rather than during the winter and spring when the actual leaching is occurring,” says Weil. To test the idea, his lab planted three different types of cover crops at four different times in the fall across two years. The crops included winter rye, radish, and a mix of rye, radish, and clover. The planting dates ranged from mid-August to mid-October.

The research team found that the earlier the cover crops were planted, the better they were able to keep nitrogen out of groundwater. “Only a few weeks’ difference in planting dates caused significant differences in the amounts of nitrogen leached, especially if planting took place after mid-September under Maryland conditions,” says Weil.

Winter rye has traditionally been the cover crop of choice in the area, as it survives harsh weather conditions. But Weil’s team suspected other crops could perform just as well, especially if they were planted early. Indeed, the tests showed that all three types of cover crops reduced nitrogen leaching.

Unfortunately, mid-September is too early to harvest crops in most crop rotations in Maryland.

“For most corn and soybean farmers, planting a cover crop early enough to be effective in preventing nitrogen leaching will likely mean getting the cover crop established before the cash crop is harvested,” Weil says. That means getting creative, like spreading cover crop seeds by airplane. This gets the seeds in between crops early, which allows them to start growing without harming the maturing cash crops.

Weil’s research helps maximize the benefit to Maryland residents who prize the Chesapeake Bay, and shows how farmers can get the most out of their cover crops as well. “Cover crops offer many benefits to the farmer who uses them; from saving soil, suppressing weeds, capturing expensive nutrients and recycling them for future crops, to capturing carbon which will improve soil organic matter and may even bring carbon market payments,” he says. “Early establishment can greatly enhance the performance of cover crops and therefore the return on investment.”

This research was supported in part by grants from Shore Rivers and the Maryland Soybean Board.

Photo Caption: Shelly Porter, undergraduate research assistant, applies a vacuum to a tension lysimeter to sample water leached during the previous 24 hours. The sample includes water and dissolved nutrients that had already drained below the crop rooting depth, which would eventually end up in groundwater and then the Chesapeake Bay. The use of cover crops helps keep nitrogen out of groundwater. Credit: Ray Weil

American Society of Agronomy, Soil Science Society of America, Crop Science Society of America: Collectively, these Societies represent more than 12,000 individual members around the world. Members are researchers and professionals in the areas of growing our world’s food supply while protecting our environment. Together we work toward solutions to advance scientific knowledge in the areas of agronomy, crop science, and soil science.