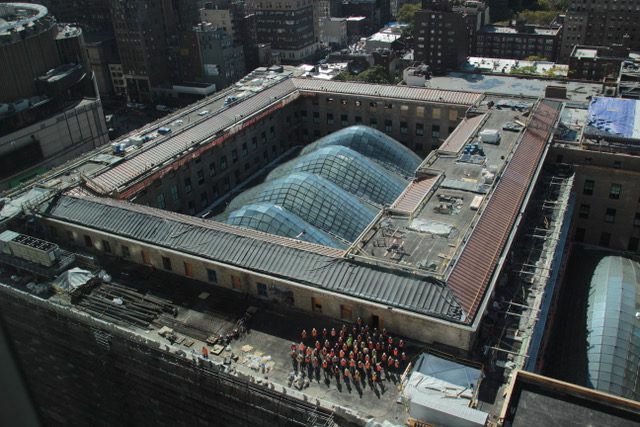 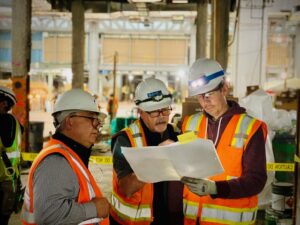 The new Moynihan Station is an extension of the old Penn Station one block away, creating a much larger, more functional station serving over 700,000 commuters each day. What were some of the project’s unique challenges?

Carlson: Inspection, testing, failure analysis and non-destructive testing are cornerstones of quality for any infrastructure project. Because of the historic nature of the property, there were significant challenges in bringing the building up to code and delivering the transformation needed. AEIS was responsible for testing and inspection, primarily of steel and pipe welding, and over the course of 4 years, we helped to ensure the new station was built properly and consistent with the design intent. This included, for example, a lot of environmental and safety regulations that needed to be adhered to. Our number one priority is to deliver a high-quality outcome that gives our client and all team members the critical information needed to complete a project successfully.

Gorman: Moynihan Station was the first project of its kind in terms of project size and scope, and as a Long Island native and longtime LIRR rider, it was exciting to be a part of! Some of the unique challenges was the obvious nature of where we were: Midtown and Penn Station are not only incredibly busy areas, but they are also above dozens of active rail tracks. We were working inside a building that is on the order of 100 years old, doing restoration work, marrying new work into old work, and collaborating with many stakeholders, authorities having jurisdiction, contractors, owner’s representatives and inspection agencies like AEIS, this project had a lot of challenges in that respect. There was a lot of great learning opportunities for us. We found all sorts of ways, by the book and on the fly, and find the ways we could contribute as an overall quality team. Today, the station has already received a lot of attention for being a modern transportation solution, but also being a commercial success as well. 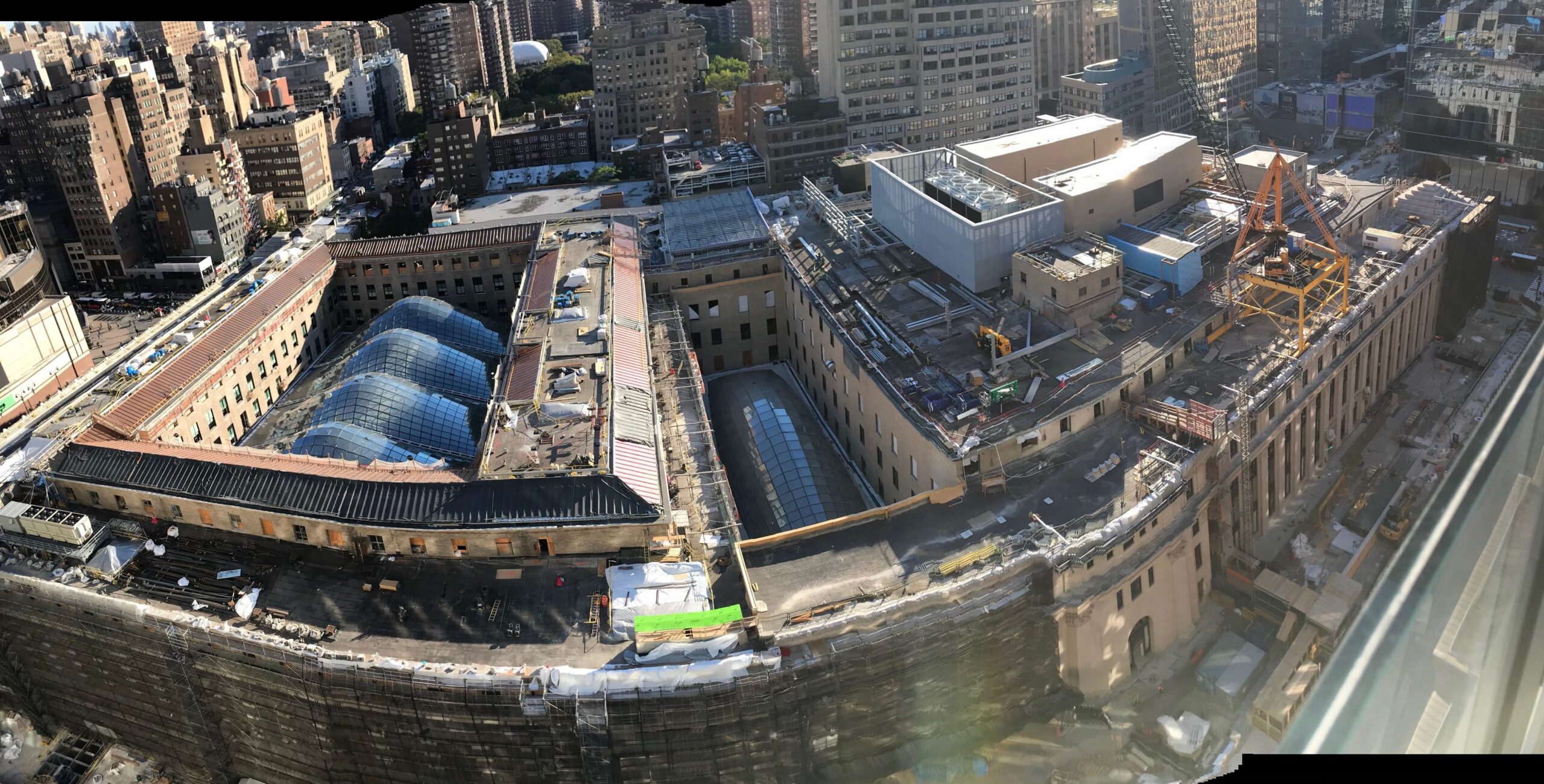 Tell us about the different phases of the Moynihan Station transformation.

Gorman: Phase 1 was generally a restoration and refit of the west end concourse, to quadruple its size, spanning from Tracks 4 to 21. This included new entrances on Eight Avenue as well as 31st and 33rd Streets, allowing additional entrances to enter into the Farley Building. Phase 2 included the overall restoration and redesign of the new train hall, and many retail spaces were cored, shelled and fit out in some cases. The skylight was a huge part of the project and the midblock entrance area. Phase 3 included the final fit-outs, or turning the spaces into “white boxes”. Other contractors were fitting out postal office spaces, office spaces for future tenants, and finishing touches, including installation of artwork on the 33rd Street entrance.

Carlson: AEIS provided inspection and non-destructive testing (NDT) to the below‐grade infrastructure for intercity and commuter rail services, the new sky-lit train hall in the Farley building, an emergency platform ventilation system, and improvements to the sub-street corridors, as well as the canopy entrances around the building, machine rooms, guard rails around the escalators, freight elevators, stairs and railings, fire protection and safety services, roof, garden and fencing areas, food courts, and upper-level corporate offices. The team also provided inspection of finishing touches like the fine artwork installations including Kehinde Wiley’s Go and Elmgreen & Dragset’s The Hive artworks.

What were some of the challenges, and keys to success, on a job of the size and scope of Moynihan Station?

Carlson: With any historic structure of this scale, there are challenges. For example, we had lead creeping into the welding, and we performed lead abatement successfully. Testing it metallurgically and seeing if it was weldable was an important part of our role and helped to ensure a safer outcome. Communication and constant sharing of information back and forth amongst team members is the key to success.

What is the role of quality assurance on a significant project like Moynihan Station?

Gorman: As the contractor, we oversaw all things related to inspection and testing and commissioning systems in place to be able to turn over the owner, end users and maintainers. In order to achieve the certificate of completion and code compliance, we are guided by the contract documents, codebooks, standards, and manufacturers whose material and equipment we rely on. All contractors come with a quality plan, articulating how they intend to check it along the way in the form of visual inspection, testing and so on. We manage a strict quality assurance program, which includes document control, testing and inspection, project management and many other important elements.

Goel: AEIS’ role for the structural welding work has been to independently certify the work. The final aim is to get the certification, and to get to that goal, we must make sure all the work has been done in a manner that is consistent with codes and standards. We start from the quality plan, drawn from the specifications, called the inspection and test plan. In addition to the published codes, this highlights what are we going to inspect on a daily as well as periodic basis.  All those aspects help us make sure the quality requirements are met as we go along.

Carlson: Having a strong documentation management system is critical when it comes to testing and inspection. Our document management system is a platform that everyone can buy into and learn that captures all the issues immediately, creates an actionable punch list, and brings the entire process together.

How important is teamwork and having qualified partners on a project of this scope?

Gorman: If you don’t have good teamwork, or the right qualified individuals, the project will suffer. For large infrastructure projects like Moynihan Station, it’s critical to assemble the best, most experienced, and responsive teams. Skanska’s history and reputation speaks for itself, having been around 130+ years as a worldwide international contractor. From the inspection and lab side, you need qualified experts; you can’t just have any person showing up and inspecting the project; you need a top company with all required certifications and deep experience in the infrastructure space like AEIS. You need certified electricians, plumbers, professional engineers—there is no choice but to bring the right people on the project.

Carlson: Teamwork and communication are the two most critical elements in creating a large infrastructure project. AEIS’ team members are comprised of highly qualified and certified professionals, with a long history of success on other transportation hubs like World Trade Center Oculus. We believe in collaboration and ensuring the client and team members have all reporting in an immediate manner. This allows them to make informed decisions, save time and increase profitability on the project.

What makes Moynihan Station different from other projects you have worked on?

Gorman: The sheer size. I’ve had the good fortune to be on large-scale projects most of my career, but Moynihan Station was truly unique in its physical size, financial investment, and of course, the notoriety of this being the busiest rail hub in the country in one of the most active cities in the world.

Goel: Architecturally, Moynihan Station is one of the most beautiful structures we have worked on—the skylit train station is stunning and is a well-deserved improvement for those that live and work in the area. While we specialize in large infrastructure, we are proud to have worked on this world-class transportation hub that is a wonderful example of revitalizing an older property into something new and modern—while keeping quality a top priority throughout the entire project.

How can organizations increase quality on major transportation and other infrastructure projects?

Gorman: you need to make sure you’re on a team that has the right attitude with laser-focus on the goal: to build and do what you were contracted to do. All the various team members—quality, inspection, safety, production, and ownership—has to be on the same page if your intention is to increase and deliver quality. It’s critical to get these different departments to overlap, collaborate and be on the same page. You are in a lot of cases thrown into a project with people you haven’t worked with before, so having the right people is imperative.

Goel: Organizations can increase quality by hiring subcontractors based on value rather than price. This approach is the most efficient way to ensure quality—to be selective when it comes to partners. You have to make sure you have the right people coming in, and that all your vendors are vetted properly and hired on a value basis. This approach will save time and money, and reduce the chances of something going wrong.

Please share why inspection, testing and certification are essential tools for quality, create greater safety of structures in service, and successful project outcomes.

Goel: The inspection, testing and certification aspect of a job is not meant to be a policing tool, more of an assurance. People don’t want to make mistakes, but as projects progress, things happen and you want to have checks and balances—this goes for any project of any size and scale. That’s what inspection, testing and certification is providing—the assurance that projects are being built to code and with a high standard.

Gorman: Agreed. As we’ve said, you have these rules and regulations in place, you have no choice but to adhere to these inspection and testing requirements and certification processes. It goes without saying that you want to deliver something that is structurally strong enough to carry the load, and deliver something safe for use to those who occupy this space and the general public. We want to create structures that can be used and lived in, are aesthetically pleasing, and most importantly, safe for the public around them. The testing and inspection aspects are essential. It’s gratifying to know you contributed in some small or large way to the success of what you’re delivering.