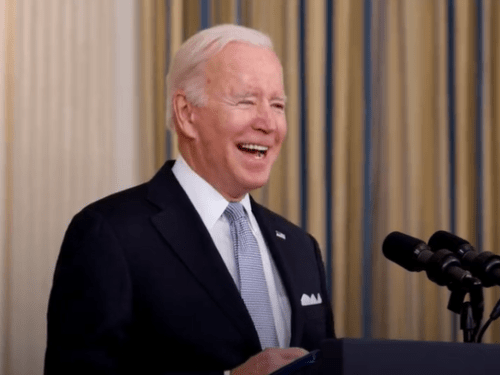 As reported by the AASHTO Journal: https://aashtojournal.org on November 9, 2021 - in News

Late on November 5, the House of Representatives passed the $1.2 trillion Infrastructure Investment and Jobs Act or IIJA by a vote of 228 to 206; an effort praised by President Biden (seen above) on November 6.

[Above image via the White House]

“[The IIJA] will create good-paying jobs that can’t be outsourced – jobs that will transform our transportation system with the most significant investments in passenger and freight rail, roads, bridges, ports, airports, and public transit in generations,” the president said in a statement.

“This will make it easier for companies to get goods to market more quickly and reduce supply chain bottlenecks now and for decades to come,” he added. “This will ease inflationary pressures and lower costs for working families.”

“No matter where they live or who they voted for, all Americans deserve to have a transportation system that works for them,” added U.S. Transportation Secretary Pete Buttigieg in a separate statement.

“Now, we begin the work of building infrastructure that will support the traveling public and ensure an economically competitive America for generations to come,” he said. “The U.S. Department of Transportation stands ready to implement this historic and transformational legislation, and help create a transportation system that works for every American.”

Jim Tymon, executive director of the American Association of State Highway and Transportation Officials, commended the House for passing the IIJA in a statement – a measure created and passed by the Senate in August.

“This bill, which provides the long-term certainty state departments of transportation need, encompasses many state DOT priorities, including considerable action to address climate change and improve system reliability, the creation of a formula-based bridge and an electric vehicle infrastructure funding program, and improvements to the project delivery and environmental review process,” Tymon said.

“A safe, efficient, multimodal transportation network is essential to improve our quality of life and economic vitality, and state DOTs are working every day to deliver just that,” he added. “The IIJA provides the much-needed resources to those agencies to make our communities better places to live, work, and play.”

A recent state DOT survey conducted by AASHTO highlighted the numerous short- and long-term economic and quality-of-life benefits poised to flow from the IIJA – a survey that polled state DOTs from across the country as to how the proposed policy and funding outlined in the IIJA would help them improve the safety, efficiency, and productivity of the transportation systems they manage.

Now that the measure will become law, AASHTO plans to create an “IIJA Implementation Plan” to immediately deliver on the public benefits of the IIJA and to advance AASHTO’s vision of “providing improved quality of life through leadership in transportation” as articulated in the 2021-2026 Strategic Plan.