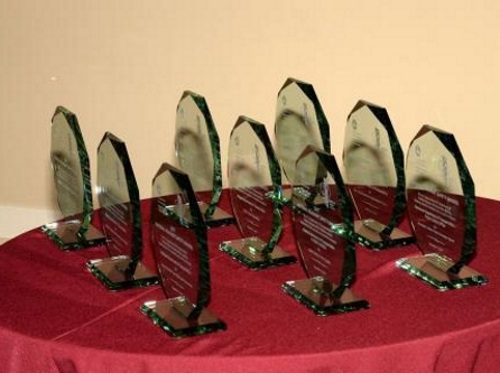 As reported by the AASHTO Journal: https://aashtojournal.org on October 11, 2021 - in Awards, News

[Above photo via the RSF]

Begun in 1999, this biennial program – sponsored by RSF and the Federal Highway Administration – honors projects and programs that cost-effectively help the nation achieve progress toward eliminating highway fatalities and serious injuries.

“Projects like these save lives by significantly discouraging dangerous driving,” said Greg Cohen, RSF’s executive director, in a statement. “Countless future travelers, whose lives and limbs will be spared by these innovations, will owe an unknowing debt of gratitude to today’s honorees.”

U.S. Secretary of Transportation Pete Buttigieg, on behalf of FHWA, presented the awards in a virtual ceremony hosted from Capitol Hill.

“Congratulations to today’s seven honorees for the remarkable work they’ve done to protect the traveling public,” Buttigieg said. “They are proof that we have no shortage of willpower or good ideas for improving roadway safety.”

The four state DOT winners are:

Two state DOTs were among the three honorable mentions given out during the ceremony.

The first went to Florida DOT for its Local Technical Assistance Program to improve the skills and increase the knowledge of the transportation workforce on roadway safety.

The second went to the Montana Department of Transportation for its reconstruction of an antiquated segment of U.S. Highway 89 that provides a key entrance to Glacier National Park.