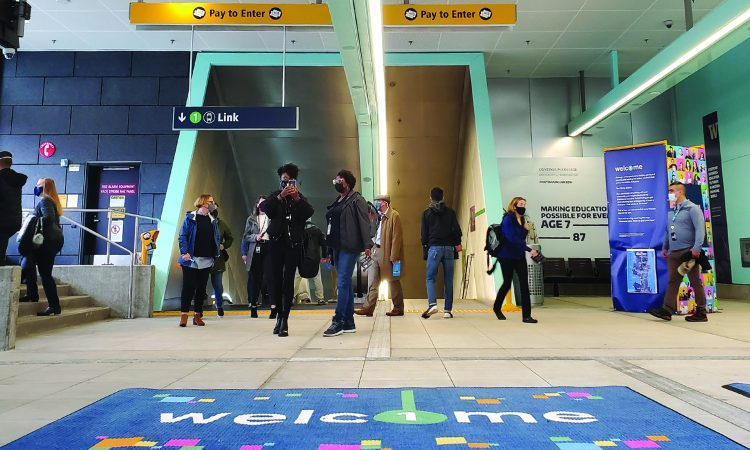 As part of the McMillen Jacobs Associates-led team, WSP USA, a leading engineering and professional services consultancy, provided final design for the $1.9 billion double-track light rail transit line that extends the transit system from its previous terminus at the University of Washington. The extension includes two underground stations – U District and Roosevelt – and an elevated station at Northgate. All but 0.8 miles of the new track are located underground.

WSP participated in extensive coordination with King County Metro and the Seattle Department of Transportation on transit, pedestrian and traffic operations, and was responsible for the aerial guideway and Northgate Station design, project integration, track design, mechanical engineering, station and tunnel ventilation, traffic and civil design for Northgate Station, and quality assurance/quality control. McMillen Jacobs Associates served as the prime consultant for the project, and KPFF provided civil design for the other two stations and a portion of Northgate Station.

“This has been a team effort with many key contributions from within WSP,” said Tara Olsen, senior project manager and assistant vice president. “It has been a privilege to get this decade-long project transforming the transportation options in the Puget Sound Region across the finish line.”

Olsen also recognized Amarjit Marwaha, who served as project manager for WSP from 2010 until his retirement in 2020.

Major development over the past decade in the U District, Roosevelt and Northgate neighborhoods has added to the need for transit hubs to serve these multi-modal and walkable communities. U District Station will see the highest ridership as the main transit connection to University of Washington’s campus and the recently upzoned neighborhood surrounding the station. Northgate Station will be integrated with a major bus hub and will connect to the Northgate Mall site, which is being rezoned as a mixed-use development that includes the training center for Seattle’s new NHL team, the Kraken, and a public skating rink facility.

A new pedestrian bridge, the John Lewis Memorial Bridge also opened on Oct. 2 and will provide pedestrians with a safer connection to Northgate Station over Interstate 5 to North Seattle Community College, the University of Washington Medical Center-Northwest, and for communities on the west side of the freeway.

Extended lengths of the WSP-designed underground track were designed on “floating slabs” to minimize disturbances to nearby University of Washington laboratories. Earthquake concerns and requirements were a major consideration and addressed in the project design, as Seattle is in a high seismic region and the Northgate Link is five miles from an active fault.

Work on the extension began with voter approval of the plan in 2008. Final design was completed in 2016 and construction began in 2017.

On Oct. 2, opening day celebrations were held at U District Station and Roosevelt Station featuring live entertainment, food and other family activities.

About WSP USA
WSP USA is the U.S. operating company of WSP, one of the world’s leading engineering and professional services firms. Dedicated to serving local communities, we are engineers, planners, technical experts, strategic advisors and construction management professionals. WSP USA designs lasting solutions in the buildings, transportation, energy, water and environment markets. With more than 12,000 employees in 200 offices across the U.S., we partner with our clients to help communities prosper. wsp.com