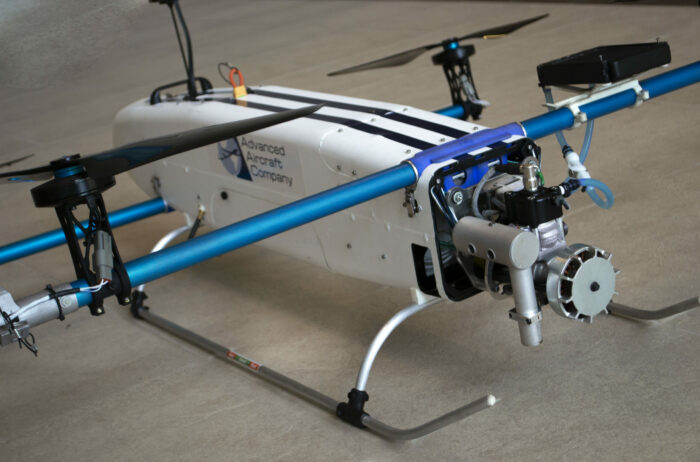 After four years in development, the company launches with a market-ready product and $2M in total investment.

AAC’s highly versatile designs incorporate a multi-rotor configuration with a hybrid gas-electric propulsion system for extended endurance and multiple, simultaneous payload capabilities. The company was founded in 2017 by Bill Fredericks, a former NASA aerospace engineer and US Marine Corps veteran.

“After four years of development, testing and validation, we are proud to announce our entry into the unmanned systems market with HAMR,” said Bill Fredericks, founder and CEO of AAC. “Our high-performance gas-electric hybrid propulsion system and aerodynamic airframe designs enable long-endurance operations.  This provides a significant competitive advantage to our customers by doubling the productivity of their pilots.”

This funding round of $850,000, led by Shenandoah Valley Angel Investors with investment from CIT Gap Funds, brings the company’s total funding to over $2M. The oversubscribed round also saw the participation of several new strategic investors. This new investment will enable AAC to scale up manufacturing, accelerate research and development, and expand its team as it prepares to expand into the global market.

According to Shenandoah Valley Angel Investors Founder George Pace, their initial investment in AAC and subsequent support during the second seed round is based on three core beliefs. “First, AAC has developed a hybrid drone solution that brings great value to the commercial drone sector by significantly increasing flight time,” said Pace. “Second, company Founder Bill Fredericks, a former NASA aerospace engineer and Marine Officer who served in Afghanistan, brings deep knowledge, leadership, and energy, which are critical for success.”

Pace also notes that AAC has delivered on their products, “which is why we supported this second seed round,” he added.

The HAMR UAS has been optimized for a wide range of commercial, defense and public safety applications. These include surveying & mapping, critical infrastructure inspection, precision agriculture, public safety and defense applications, including long-endurance ISR, and search and rescue missions. The HAMR UAS also serves as a force multiplier, providing a significant increase in ISR capabilities relative to DoD’s incumbent tactical ISR UAS to better protect our warfighters.

The HAMR utilizes a series hybrid gas-electric propulsion system that incorporates an electronic fuel injected and computer-controlled 35cc single-piston engine driving an integrated generator producing up to 2000W to power six independent brushless DC electric motors and a backup battery. This configuration allows for up to 3.5 hours of flight time, six times longer than a conventional battery-powered multirotor aircraft. Multiple redundant systems, remote engine starting, and onboard batteries ensure the aircraft can operate with a high margin of safety. In the event of an engine failure or an electric motor failure, the craft can abort and land safely.

Architected and built to the standards of crewed aircraft to enable ISO AS9100 certification as production rate scales, the systems employ line replaceable units (LRUs), ensuring rapid in the field servicing with minimum downtime, while a continuous development program lengthens aircraft service life and increases its capabilities as new technologies get integrated over time. This means no customer is left behind and every aircraft produced is upgradable as new features come out in the future.

Additionally, the HAMR is highly portable and can be launched within minutes without the need for ground support infrastructure. The system can be disassembled and stored in a single case and easily transported in a conventional passenger or small military vehicle.

The HAMR has been operational with select customers over the last year and AAC is now accepting additional production orders. Sales include on-site training and a limited warranty. Additional maintenance and service packages are available. For more information or to schedule a demo, please visit www.flyaac.com.

Advanced Aircraft Company (AAC) is a developer and manufacturer of hybrid electric unmanned aircraft systems for commercial, public safety and defense applications. Utilizing multirotor configurations with gasoline-electric propulsion and aerodynamic airframes, the systems are designed for long-endurance flights with the capability to carry multiple simultaneous sensor payloads. Designed for ISO AS9100 production standards, the systems employ line replaceable components, ensuring rapid servicing in the field with minimum downtime. An open modular architecture allows for mission-specific reconfiguration while a continuous development program lengthens aircraft service life and increases their capabilities as new technologies are integrated over time. AAC systems are highly portable and can be launched in minutes without the need for support infrastructure. All AAC aircraft are NDAA Sec. 848 compliant and built in the USA with qualified traceable parts. AAC is a veteran-owned and operated company founded in 2017 with headquarters in Hampton, Virginia. To learn more, visit www.flyaac.com.