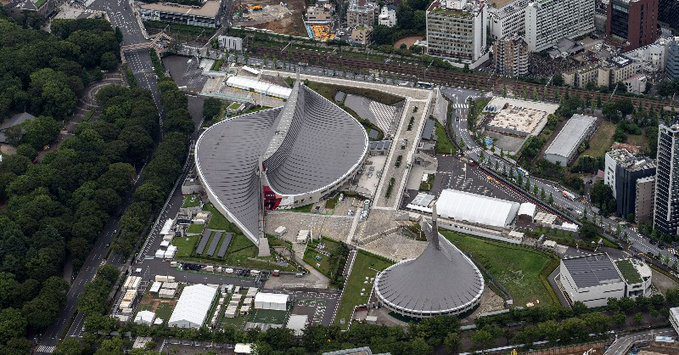 No wonder then that this unique blend of modern and traditional also applies to the venues at the Olympic Games Tokyo 2020, which are also aimed at speeding the city’s transition to become more inclusive, and smart.

“Tokyo has a rich heritage and has shown its capacity to innovate, for example at the Olympic Games 1964. This time, the Games will accelerate the city’s move to a more sustainable future,” says Marie Sallois, IOC Director for Sustainability.

This mix of old and new sees venues clustered into two major zones – the more traditional “Heritage Zone” and the more modern “Tokyo Bay Area Zone”, which is closer to the sea.

The first cluster, the Heritage Zone, includes venues that were first used for the Olympic Games Tokyo 1964. One of these, the iconic Nippon Budokan, is the spiritual home of Japanese martial arts, where judo was first included on the Olympic programme in 1964. This year it will welcome karate to the Olympic Games too.

The Tokyo Bay Zone, on the other hand, is a cluster of modern venues, many of them linked to water. The Tokyo Aquatics Centre, for example, has elegant curves on its diving platforms and a 10-lane main pool. State-of-the-art technology allows the length and depth of its pools to be adjusted by moving floors and walls. To complete the sense of modernity, and reflecting Tokyo 2020’s commitment to sustainability, it is powered by solar energy and a ground heat exchanger.

Even if this mix of old and new was always part of the plan, that plan has evolved since 2013 when the Games were awarded to Tokyo. Since then, the IOC’s Olympic Agenda 2020 has required host cities to make maximum use of existing venues, reducing both the cost of construction and carbon emissions.

As a result, Tokyo 2020 has minimised new construction, and of a total 43 competition venues, just eight have been built from scratch, while 10 are temporary and 25 are being reused. Going forward, just five per cent of the venues at Paris 2024 will be new, and this figure will fall to zero for Los Angeles 2028.

Of the 25 venues reused for Tokyo 2020, five were used at Tokyo’s 1964 Olympic Games: the Yoyogi National Stadium, Equestrian Park, Nippon Budokan, Enoshima Yacht Harbour and Tokyo Metropolitan Gymnasium. They are some of Tokyo’s most iconic venues.

Most famous for its suspension roof, for example, the Yoyogi National Gymnasium has become an architectural icon due to its distinctive design, mixing traditional Japanese architecture and western modernist aesthetics. This year, it will host handball, and Paralympic rugby and badminton.

Away from sport, Tokyo planners say the Olympic Games are helping to accelerate their city’s transition to become more inclusive and smart (link). The Games are  enabling Tokyo’s 14 million residents to have more green spaces, healthier lifestyles, easier transport possibilities, and a better balance between life and work. The Games are also helping the city become more sustainable and better adapted to future challenges.

One of these challenges will inevitably be climate change. Besides reducing emissions through the extensive use of renewable energies, such as biomass, hydrogen, heat pumps and solar, the Tokyo 2020 venues are designed with heat in mind.

Tokyo’s new Olympic Stadium allows the wind from outside to breeze through the stands, for example, cooling the athletes and fans inside. In an emergency, the same stadium will be used as a shelter, while its stores can hold enough food and water for 80,000 people. City authorities are also creating more green spaces, planting trees and installing heat-reflecting pavements.

One of the green spaces will be down at the Olympic Village, which is set to host some 11,000 athletes this summer. When the Games are over, it will eventually consist of 24 buildings, housing a mix of residents, including the elderly and young families. Designed to demonstrate an urban lifestyle that is both environmentally friendly and technologically advanced, the Olympic Village will have seaside parks and other green spaces that add to the quality of life.

An important part of the Tokyo 2020 legacy will be improved sporting facilities for the city’s residents. Recently constructed venues in the Bay Area Zone will offer the local community opportunities for swimming, as well as canoeing, archery, sailing, hockey, running, tennis, rugby, rowing and many more.

Indeed, a Tokyo city target sees 70 per cent of Tokyo’s residents practising sport at least once a week. This target includes the elderly as well as people with impairments. And so the Olympic preparations include creating a barrier-free environment across the city’s parks and streets, for people of all ages and abilities.

This story was originally published here.