/ Energy / Earth Day: Great Opportunity to Zero in on the Infrastructure Changes Needed for the Transformation of the Energy Sector

Earth Day: Great Opportunity to Zero in on the Infrastructure Changes Needed for the Transformation of the Energy Sector 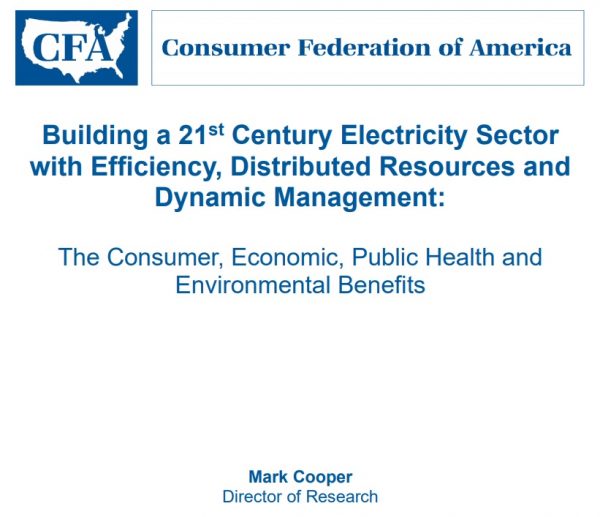 Washington, D.C. — Today, Earth Day, the Consumer Federation of America released a new report, Building a 21st Century Electricity Sector With Efficiency, Distributed Resources and Dynamic Management, outlining the economic, environmental and health benefits of transforming the nation’s energy sector.  “This sector will be the core of the 21st century economy based on efficiency and renewable generating sources,” said Dr. Mark Cooper, the report’s author and CFA’s Research Director.  The report outlines how efficiency and renewable alternatives will create a low cost, low carbon, low pollution energy sector thereby creating millions of new jobs and distributing them more equitably throughout the country.

The report traces the historical technological revolutions that have set the stage for the next generation of technology and examines the four key supply side components of the new energy economy: efficiency, wind, solar, and batteries.  “Already, the nation has moved forward on all of these fronts without significant system management problems.  While the challenges of building the physical and institutional infrastructure to support the 21st century electric sector are great, so are the rewards,” said Cooper.

The paper outlines the positive impact this transformation will have on jobs in the development and deployment of alternatives as well as system management.  Additional benefits include:

Cooper explains in the report:

A fully transformed energy sector based on efficiency, renewables and dynamic integration of supply and demand would result in direct and indirect annual savings of at least $500 per household, and as much as $1,500, when declining costs and the increasing value of benefits are considered.

“Ironically, the effort to promote this transformation may have suffered from a history of being tagged as an environmental issue.  While improvements in public health and the environment are important benefits of the transformation, the first and largest benefits are economic,” Cooper added.

“While some question whether the energy transformation belongs in an infrastructure bill,” Cooper concluded, “the fact that a majority of economic output in the U.S. is dependent upon reliable energy makes it clear that the electricity sector constitutes a large part of the ‘infrastructure’ a unique prerequisite to economic development in the 21st century. Transforming the grid involves large scale physical and institutional projects that are built and managed by a small number of entities, which makes them dependent on public policy and these projects are certainly ‘shovel ready.’”

The report is available here.

The Consumer Federation of America is an association of more than 250 nonprofit consumer and cooperative groups that was founded in 1968 to advance the consumer interest through research, advocacy, and education.