Woodford County sits right in the heart of the Bluegrass region of Kentucky, a beautiful part of the country containing the north-flowing Kentucky River. According to Emergency Management Director Drew Chandler, neighborhoods along the river enjoy peaceful weather nearly all year.

That’s what made it all the more challenging when a huge rain event pounded the region on a Tuesday morning in early March 2021, causing the river level to rise far above comfortable levels. Initial forecasts said that the rainfall would lead to a minor flood stage.

Upriver, the operator of a hydroelectric power plant had to make the tough decision to discharge water into a tributary of the Kentucky River, increasing the forecast from minor to major flood stage with a crest above 40 feet.

Challenge
When it comes to declaring a disaster, all work has to begin at the local level. Before the Commonwealth of Kentucky could approach FEMA and the federal government, all its counties would need to compile damage assessment data to provide documentation and justification for federal aid.

To reach the threshold for federal aid, assessments need to take place quickly and efficiently. However, half of the impacted homes in Woodford County couldn’t be accessed due to the water level and the fact that the Kentucky River continued to flow in an unsafe manner.

To be proactive about the situation, Drew and Woodford County GIS Coordinator Kenneth Johns reached out to EagleView on Wednesday evening inquiring about the possibility of purchasing a flight to capture imagery of the areas hit by the flooding.

Solution
Within hours, EagleView District Manager Jason Blalock worked with Drew and Kenneth to determine when capture must occur (before Friday afternoon, to document water levels and damage) and had his project manager begin drawing up flight plans. A nearby aircraft became available and was assigned to the Woodford County capture.

Early Thursday morning, after discussing pricing and logistics, Drew and the County Judge/Executive contacted Jason to proceed with the flight. In an amazing timeline, the aircraft hit the skies that afternoon to begin the image capture.

“EagleView didn’t wait for us to cross the t’s and dot the i’s on the contract,” said Drew. “After we reached a verbal agreement, they made it happen right away, which is really pretty remarkable. All we had to do was provide shape files of the areas we needed, and they put the plane in the air.”

By Saturday afternoon, Woodford County employees had early access imagery at their fingertips and began to complete damage assessments right away.

“We set up several users with CONNECT on iPads, and it just streamlined their ability to see all the damage quickly,” said Drew.

At the end of the day, this once-a-decade storm event justified purchasing the flight with taxpayer money because of who stood to benefit the most – the affected taxpayers.

“Getting these assessments done as quickly as possible helps us get much-needed aid to our affected residents,” said Drew. “Assessments are compiled with state data to reach the threshold for federal aid, and we really needed to get moving in  order to better serve those who were struggling in  the aftermath of the flood. Plus, it helps the flood plain coordinator provide documentation when FEMA comes in after the water has receded.”

“The quality of the imagery makes the assessments indisputable – for FEMA or an insurance adjuster, it’s the best documentation we can offer.”

Now that all the damage assessments have been completed and filed away, both Drew and Kenneth agree on one thing.

“The speed at which Woodford County was able to get this done wouldn’t have been possible without EagleView.” 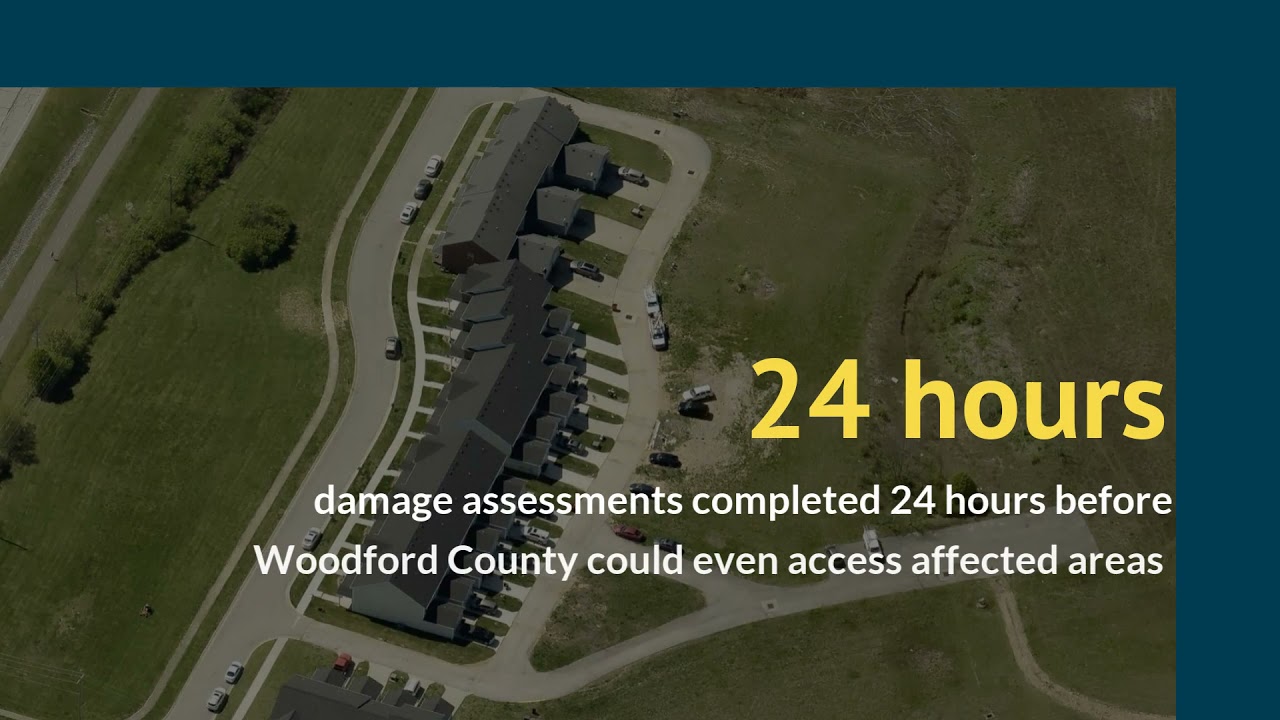 Get accurate measurements and helpful sales tools today by ordering your EagleView report online or downloading the EagleView App from the Android or Apple app stores.