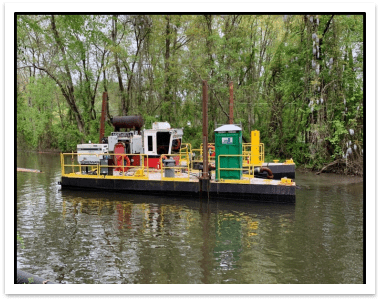 Dredging equipment that will be used to remove sediment at Otter Creek (Photo Credit: U.S. Army Corps of Engineers).

CHICAGO – This week, U.S. Environmental Protection Agency began dredging contaminated sediment in a 7-mile stretch of Otter Creek which extends through Toledo and Oregon, Ohio, before flowing into Maumee Bay. The Maumee Area of Concern was identified by the United States and Canada in the mid-1980s as one of the most environmentally degraded areas in the Great Lakes.
Sediment in the lower 1.7 miles of Otter Creek is contaminated with elevated levels of polycyclic aromatic hydrocarbons and diesel range organics. Dredging will begin about a 1/4-mile downstream of Millard Avenue and continue to its mouth in Maumee Bay.

A hydraulic vacuum-like dredge will be used to remove approximately 57,000 cubic yards of contaminated sediment from the creek’s bottom. The sediment will then be pumped through a submerged pipeline to the nearby Toledo-Lucas County Port Authority’s confined disposal facility. EPA estimates that the total amount of dredged sediment would fill almost three football fields,10 feet high.

Illustration showing how the waste material will be stored at the disposal facility.

EPA anticipates the cleanup to be complete in the late summer of 2021. Afterwards, the dredged area will be covered with a foot of sand to create a barrier against any remaining contamination. Otter Creek will then once again provide a healthy habitat for native organisms.
EPA’s Great Lakes National Program Office is overseeing the $12.1 million cleanup, which is a voluntary project funded by the federal Great Lakes Restoration Initiative and by non-federal partners. The GLRI was launched in 2010 as a non-regulatory program to accelerate efforts to protect and restore the largest system of fresh surface water in the world