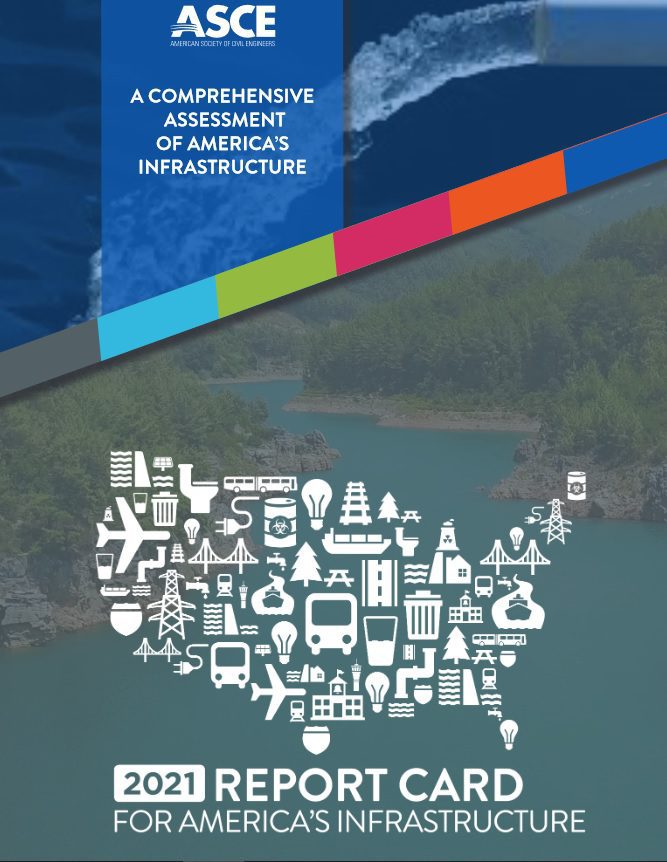 Parul Dubey on March 3, 2021 - in Featured, News
WASHINGTON, D.C. – The American Society of Civil Engineers (ASCE) today released the 2021 Report Card for America’s Infrastructure, its latest quadrennial assessment of the nation’s infrastructure. The Report Card gives the U.S. an overall ‘C-’ grade and finds the country is spending just over half of what is required to support the backbone of the economy.
The study evaluated 17 categories of infrastructure, with grades ranging from a ‘B’ for Rail to a ‘D-’ for Transit. For the first time in 20 years, the country’s infrastructure as a whole received a grade in the ‘C’ range, meaning on average, the nation’s infrastructure is in mediocre condition, has deficiencies and needs attention. However, 11 of the 17 categories in the Report Card received a grade in the ‘D’ range: aviation, dams, hazardous waste, inland waterways, levees, public parks, roads, schools, stormwater, transit, and wastewater.
Over the past four years, the U.S. made incremental gains in some categories, according to the Report Card. Due to increased investment, grades improved in aviation, drinking water, energy, inland waterways, and ports. One infrastructure category – bridges – saw a decrease in grade in part because of the number of bridges that slipped to “fair” condition from “good.” Transit received a ‘D-’ in the report, the lowest grade. Some 45% of Americans lack access to transit and existing infrastructure is aging.
Overall, the long-term infrastructure investment gap continues to grow. That gap has risen from $2.1 trillion over 10 years in the last report to $2.59 trillion in the latest study, meaning a funding gap of $259 billion per year.
Said ASCE Executive Director Thomas Smith: “This not a report card anyone would be proud to take home. We have not made significant enough investments to maintain infrastructure that in some cases was built more than 50 years ago. As this study shows, we risk significant economic losses, higher costs to consumers, businesses and manufacturers – and our quality of life – if we don’t act urgently. When we fail to invest in infrastructure, we pay the price.”
There were 22 weather and climate disasters in the U.S. that cost at least $1 billion in 2020, the most in history, according to the National Oceanic and Atmospheric Administration.
If the U.S. does not pay its overdue infrastructure bill, ASCE said by 2039 the U.S. economy will lose $10 trillion in growth and exports will decline by $2.4 trillion. More than 3 million jobs will be lost in 2039. In addition, each American household will bear $3,300 in hidden costs per year.
ASCE highlighted the role infrastructure investment could play in speeding the nation’s economic recovery. “America’s infrastructure bill is overdue, and we have been ignoring it for years. The COVID-19 pandemic only exacerbates the funding challenge because state and local governments have had to prioritize public health over everything else for the past year,” said Jean-Louis Briaud, Ph.D., P.E., ASCE President. “If we take action now, we can generate job growth and build infrastructure that is more reliable, more secure and more resilient while increasing the quality of life for everyone.”
ASCE called on Congress and the administration to take “big and bold action” on infrastructure quickly.
“Infrastructure is an issue that everyone agrees needs action and doing so will help the U.S. now and in the future. Delaying only increases the costs,” said Emily Feenstra, ASCE’s Managing Director of Government Relations and Infrastructure Initiatives.
While ASCE grades the categories individually, the nation’s infrastructure is a series of connected systems. The report found three overarching trends impacting infrastructure:
The 2021 Report Card for America’s Infrastructure was released publicly during a virtual news conference that was followed by ASCE’s Solutions Summit. This separate event included spotlights on various infrastructure topics – energy, dams and levees, transportation, water, and inland waterways and ports. Featured speakers included Secretary of Transportation Pete Buttigieg, Maryland Governor Larry Hogan, Senator Shelley Moore Capito (R-WV), and Representative Peter DeFazio (D-OR), among others.
To view the full report and additional data, visit InfrastructureReportCard.org.
ABOUT THE ASCE REPORT CARD
Using a simple A to F school report card format, ASCE’s Infrastructure Report Card provides a comprehensive assessment of current infrastructure conditions and needs, assigning grades and making recommendations to raise them. The ASCE Committee on America’s Infrastructure, made up of dedicated civil engineers from across the country with decades of expertise in all categories, prepares the Report Card, assessing all relevant data and reports, consulting with technical and industry experts, and assigning grades using the following criteria: capacity, condition, funding, future need, operation and maintenance, public safety, resilience, and innovation. Since 1998, the grades have been near failing, averaging only Ds, due to delayed maintenance and underinvestment across most categories.
In addition to the national Report Card, ASCE’s sections and branches prepare state and regional Infrastructure Report Cards on a rolling basis.
Additional information regarding the Report Card, category grades, and state Report Cards and information, as well as infographics, videos, and other resources, can be found on www.infrastructurereportcard.org or via the Report Card app in the Google Play and App Stores.
ABOUT THE AMERICAN SOCIETY OF CIVIL ENGINEERS
Founded in 1852, the American Society of Civil Engineers represents more than 150,000 civil engineers worldwide and is America’s oldest national engineering society. ASCE works to raise awareness of the need to maintain and modernize the nation’s infrastructure using sustainable and resilient practices, advocates for increasing and optimizing investment in infrastructure, and improve engineering knowledge and competency. For more information, visit www.asce.org or www.infrastructurereportcard.org and follow us on Twitter, @ASCETweets and @ASCEGovRel.
###
Comments are disabled
NEXT ARTICLE
New Millennium introduces 32-inch-wide steel roof deck
March 4, 2021
PREVIOUS ARTICLE
ASCE Infrastructure Report Card reveals few bright spots for water infrastructure
March 3, 2021