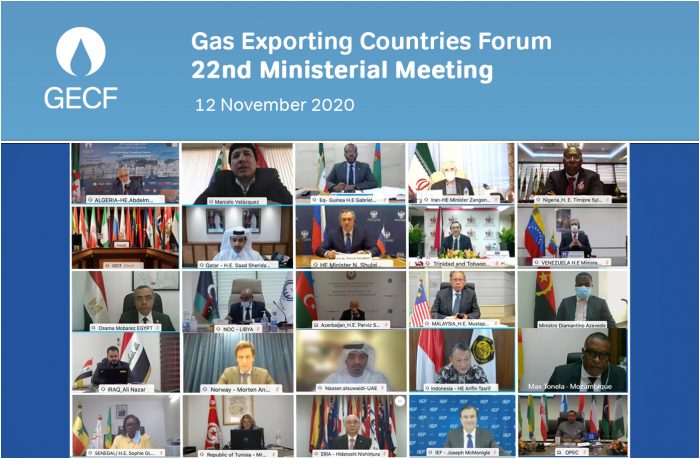 Doha, QATAR: The 22nd Ministerial Meeting of the Gas Exporting Countries Forum (GECF) was held on the 12 November 2020, under the Chairmanship of HE Abdelmadjid Attar, Minister of Energy of the People’s Democratic Republic of Algeria as its President. The meeting was convened by videoconference.

It was attended by Energy Ministers and top authorities from Algeria, Bolivia, Egypt, Equatorial Guinea, Iran, Libya, Nigeria, Qatar, Russia, Trinidad and Tobago, and Venezuela, as well as Angola, Azerbaijan, Iraq, Malaysia, and Norway as Observers.

Heads of Energy Administrations of Indonesia, Mozambique, Senegal, Tunisia, and Turkmenistan along with the leadership of ERIA, IEF, and OPEC attended the opening session as the guests of the Forum.

The Ministers stressed that this abundant and flexible source of energy will continue to satisfy the increasing world energy needs, as well as the exigences of the three pillars of sustainable development, namely economic development, social progress and the protection of the environment. Furthermore, the Meeting also emphasised that natural gas will continue to be a stepping stone to sustainable development and lower energy systems’ emissions.

The Meeting reaffirmed its determination to enhance the pace of cooperation to raise the efficiency of the GECF. It also acknowledged the resilience displayed by the Member Countries in their attempt to ensure unrestricted functioning of free and flexible gas markets, as well as uninterrupted supplies to customers, in spite of numerous challenges and decline in revenues.

In his opening remarks, HE Minister Abdelmadjid Attar provided an overview of the developments in the gas industry and outlined the strategic imperatives that will carry it forward, as well as the key role of the GECF as a unique platform for multilateral dialogue between gas exporting countries and gas consuming countries and the industry.

HE Yury Sentyurin, GECF Secretary General, presented the Management Report of the Secretariat, highlighting the various activities undertaken in 2020 and aimed at realising the vision as enshrined in the 2019 Malabo Declaration, the Forum’s Statute, its Long-Term Strategy, the 5-Year Working Plan, and the 2019 and 2020 Programmes of Work.

An advanced 2020 edition of the Forum’s flagship publication, Global Gas Outlook 2050, was presented to the Meeting, based on the GECF Global Gas Model. Ministers welcomed the launch of the 2020 edition of the GECF Annual Statistical Bulletin and appreciated the data-driven insights that it provides. Furthermore, the Ministerial Meeting hailed the brand-new GECF Annual Short-Term Gas Market Report.

In the area of research, the Ministers commended the achievements made in the establishment of the Gas Research Institute in Algeria.

The Meeting approved the policy and procedures for the GECF Awards. The public launch of the GECF Awards will start in 2021 and will culminate in a gala ceremony to be held on the sidelines of the 6th GECF Summit of Heads of State and Government.

In reviewing the status report on preparations of the 6th Summit, the Ministers recorded their satisfaction with the progress made by the State of Qatar as the host of this flagship biennial event, scheduled to be held in Doha on 18 November 2021. The People’s Democratic Republic of Algeria will host the 7th GECF Summit in Algiers in 2023.

Additionally, it was decided that the 23rd Ministerial Meeting of the GECF will convene in Doha, the State of Qatar on 16 November 2021.

The Ministers and Heads of Delegation extended their appreciation to HE Minister Abdelmadjid Attar for leading and guiding the functioning of the GECF under Algeria’s 2020 Presidency.

Being a foremost energy association, officially established in 2008, the GECF has recorded notable milestones in its evolution and remains committed to supporting its Member Countries in the pursuit of global energy security and meeting the world’s growing energy demand, while proving to be reliable suppliers of natural gas – a prominent contributor in the global pursuit towards net-zero emissions energy systems and attainment of the 2030 Sustainable Development Goals.

The Forum provides granular, scientifically based insights into the state of natural gas based on the diverse variety of the instruments and deliverables such as the Gas Research Institute, the GECF Global Gas Model – now with elements of artificial intelligence and digital technologies, Global Gas Outlook 2050, Annual Short-Term Gas Market Report, Monthly Gas Market Report, Special Envoys on Data and Statistics, Data Exchange Mechanism, the Short-, Medium-, and Long-Term Gas Market Reviews, and Monthly, Quarterly, and Annual Statistical Bulletins.