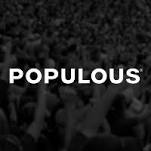 Kansas City, MO – Global design firm Populous today announced the appointment of a new Global Chair and the addition of a director to its Global Holdings Board of Directors.

Joseph E. Spear, FAIA, a founder of Populous, is completing his second tour of Global Chair service and will be succeeded by Santee. Spear is best known as an innovator in the design of sports facilities and for unlocking the urban development power of large-scale public buildings. Spear is one of the most acclaimed designers of sports facilities around the world, with a more than 35-year career that includes two National AIA Honor Award-winners for Urban Design, the profession’s highest recognition and the only times a sports building has been recognized. He is also a Fellow of the American Institute of Architects, another prestigious honor. Notable work of Spear’s includes Coors Field in Denver, Oracle Park in San Francisco, Audi Field in D.C., and TD Ameritrade Park in Omaha.

Earl Santee brings bold energy and determination, strategic vision and strength to everything he does. During his 35-year career at Populous, Santee has become one of the most widely acclaimed sports designers in the world. His intuition and insight have created a portfolio of award-winning projects that have helped bring urban life back to cities across the nation, including Minneapolis, New York, Pittsburgh, St. Louis, and Denver.  Santee’s designs are impactful in that they relate to and draw together communities around sport, and often change the fan experience by capturing emotion and spirit and creating authentic moments. He is a Fellow of the American Institute of Architects and recently was Populous’ Americas Managing Director from 2015 until 2019.

Jonathan Mallie is the leader of Populous’ New York City office. For over two decades, he has pushed the boundaries of design while consistently leveraging cutting-edge design technologies. Mallie joined the Americas Regional Board in 2017 and has been instrumental in coordinating global design efforts across each of the firm’s regions in support of mutual clients. His forward-facing thinking and fresh voice is a terrific addition to the Holdings Board.

Mallie has met the challenges inherent in a wide range of project types, including sports and entertainment venues located across the U.S., as well as commercial, residential, academic, and mixed-use complexes in New York, Miami, Kenya, Botswana, Singapore and India. He has worked with the leaders and project teams of clients such as Forest City Ratner Companies, Tishman Speyer, The Brooklyn Nets, The Cleveland Cavaliers, the Government of Kenya and Google. Mallie is currently leading Populous’ design for a new state-of-the-art headquarters and training facility for the Carolina Panthers and FC Cincinnati’s new West End Stadium.

Populous is a global design firm that designs the places where people love to be together, like Yankee Stadium, the London Olympics, and the Super Bowl. Over the last 37 years, the firm has designed more than 3,000 projects worth $40 billion across emerging and established markets. Populous’ comprehensive services include architecture, interior design, event planning and overlay, branded environments, wayfinding and graphics, planning and urban design, landscape architecture, aviation and transport design, hotels and hospitality, and sustainable design consulting. Populous has 18 offices on four continents and more than 600 employees with regional centers in Kansas City, London and Brisbane.