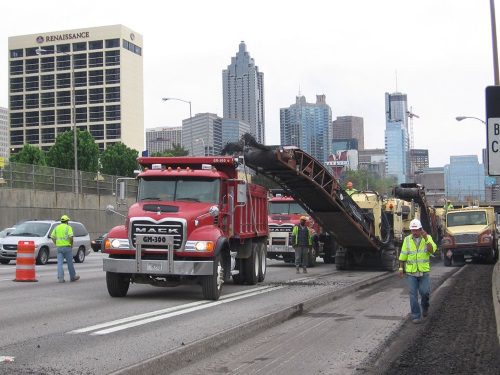 As reported by the AASHTO Journal: https://aashtojournal.org on June 1, 2020 - in COVID-19, News, Transportation

State departments of transportation continue to grapple with significant revenue reductions due to the COVID-19 pandemic – reductions that many expect will be long-term in nature.

[Above photo by the Georgia Department of Transportation.]

Julie Lorenz, secretary of the Kansas Department of Transportation, said in a May 8 letter that her agency is expected to lose between $100 million and $450 million worth of transportation revenues due to reductions in sales tax and motor fuel tax collections.

“Our shared story is that we face lost jobs, closed businesses, and enormous changes in our daily lives,” she explained in that letter.

“As we face reduced revenues to the state, [we] respectfully request that consideration be given to help ALL forms of transportation in Kansas and the jobs and businesses that rely on the work that comes from maintaining that system in our state,” Lorenz noted.

“Just as importantly, our citizens rely on a safe, efficient transportation system to get goods and supplies to markets and to begin returning to work as Kansas reopens,” she said.

Yassmin Gramian, acting secretary of the Pennsylvania Department of Transportation, noted in a May 1 letter to Congress that the COVID-19 outbreak is “causing major reductions in state revenue sources in Pennsylvania” with “revenue losses and delays being seen in almost all revenue sources.”

She noted that reduced motor vehicle usage is causing an estimated $800 million to $900 million decline in diesel and gasoline tax collections along with reduction in certain licensing and vehicle registration fees. Reduced sales tax collections, lottery proceeds, along with fewer vehicle rental, vehicle lease, tire tax, and turnpike toll collections resulted in a further $110 million loss in the state’s transportation revenues, she added.

“The total estimated dollars lost are based on an impact into late summer [and] this estimate is difficult to calculate and could be greatly reduced, or increased, depending on the duration of the impact of COVID-19,” Gramian added.

“But even prior to the COVID-19 pandemic, Pennsylvania was already being forced to make some very difficult decisions due to inaction at the Federal level to increase infrastructure funding,” she said.

“The current state revenue situation due to COVID-19 exacerbates this situation and will result in a reduction to Pennsylvania’s maintenance and operations, as well as, our construction program moving forward,” Gramian pointed out.

Such revenue shortfalls are causing most state DOTs to make adjustments to annual maintenance expenditures. The North Carolina Department of Transportation, for example, is reducing highway mowing and beautification efforts to save money.

According to a news story, the NCDOT – which is projecting a $300 million revenue shortfall for FY 2020 due to COVID-19 – is delaying the start of its mowing operations to June 1 this year compared to the typical April start time. The agency said it also plans to only conduct three “mowing cycles” for the 80,000 miles of highway it is responsible for, each lasting six weeks, compared to the average of five or six cycles in previous years.

And Russell McMurry, commissioner of the Georgia Department of Transportation, noted in an April 29 letter to Congress that the bulk of funding for such maintenance activities – not to mention for construction work and other transportation system needs as well – comes largely from state revenue sources.

Other states are facing similar fiscal disruptions due to COVID-19.

On May 5, staff economists of New Mexico’s Legislative Finance Committee, Taxation and Revenue Department, Department of Finance and Administration, and Department of Transportation, issued a five-page memo outlining a potential three-year falloff in recurring state revenues – declining by $370 million to $480 million for fiscal year 2020, followed by a $1.3 billion to $2.1 billion drop below the FY 2021 operating budget of $7.6 billion passed during the 2020 legislative session.

“Exacerbating the issues, New Mexico is an energy-producing state with a high degree of sensitivity to changes in the oil and natural gas markets, which makes the forecast sensitive to changes in commodity prices and produced volumes that affect all of the state’s major revenue sources,” those economists said.

“The effects will be particularly detrimental to general fund revenues. Nearly 70 percent of revenue growth from FY 2018 to FY 2019 was tied directly and indirectly to growth in the oil and gas industry, and current low prices and associated drilling and production declines stand to eliminate a significant portion of recurring revenue for years to come,” they noted.

Elizabeth Maher Muoio, state treasurer for New Jersey, noted in a May 22 statement that the COVID-19 pandemic has rendered much of the FY 2021 budget proposed earlier this year by Governor Phil Murphy (D) “obsolete without additional federal funding and the ability to access borrowing mechanisms.”

“As a state, we had made great strides over the last two years to improve our fiscal condition,” she said. “However, the global pandemic sparked by COVID-19 has halted this progress in its tracks. Managing this unprecedented fiscal crisis will require extremely difficult decisions in the weeks and months ahead, and will necessitate a combination of budget and appropriation adjustments, critically needed borrowing, and more robust federal assistance.”

Based on a wide variety of economic assumptions, Muoio said New Jersey is potentially facing a combined revenue shortfall of nearly $10 billion over the remaining months of FY 2020 on through the end of FY 2021 – “a potential decline that would be worse than the Great Recession.”

Additionally, to help offset the anticipated billions in lost revenue, Gov. Murphy’s administration is proposing “significant cuts” across nearly all sectors of government by over $5 billion, including $1.3 billion in proposed de-appropriations, $3.2 billion in cut or delayed first quarter appropriations; and the withdrawal of $849.7 million in proposed spending priorities put forth in February.

Those are but a few examples of why the American Association of State Highway and Transportation Officials and many of its state DOT members continue to call for a $50 billion funding “backstop” for state DOTs – especially in order to keep the nation’s transportation system fully operation to help the country recover from the COVID-19 outbreak.

“This crucial action will prevent major disruptions in the collective ability of state DOTs to operate and maintain our nation’s multimodal transportation system during this unprecedented emergency,” added Toks Omishakin, director of the California Department of Transportation, in a May 22 letter to Congress. “It will also prevent cancellations and delays of projects as well as potential job losses in both the state DOT workforce and the private sector around the country.”

“With that said, the AASHTO backstop specifically addresses immediate transportation and infrastructure needs faced by state DOTs supported by dedicated state-level user fees on motor fuels and vehicles outside of the general fund,” he said. “The backstop funds allocated specifically for transportation purposes will enable our national system to remain safe and operational to support the movement of emergency personnel and supplies, in addition to making sure important construction work can continue.”