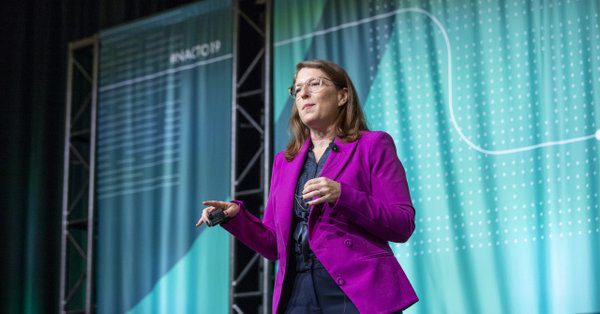 “It has been an honor and privilege to serve this organization during an exciting period of growth, not only in size but in the scope of work we’ve taken on to tackle a growing set of transportation challenges,” said Seleta Reynolds, General Manager of the Los Angeles Department of Transportation and Former NACTO President. “I am so proud of what this board and staff have accomplished over the last five years and can not wait to see what great new things will happen under the capable leadership of Robin and Eulois.”

“In just the last five years, NACTO has doubled its membership and become the preeminent voice on transformative transportation in North America,” said Janette Sadik-Khan, NACTO Chair. “Seleta’s leadership helped expand the scope of our vision and she’s been a smart and savvy voice for our members. Robin’s experience as a prominent leader and as a NACTO official makes her a natural to lead us forward and advance transportation during this critical new era.”

“We are so grateful for Seleta’s service. She infused humor, zeal, and dedication to the possibility of transformative change on city streets, and helped cultivate the next generation of leaders, most notably with Leadership NACTO,” said NACTO Executive Director Corinne Kisner. “We’re thrilled to have Robin and Eulois’ leadership at this critical time for cities. They have both contributed for years to the NACTO network, championing streets that move people safely and reliably, connecting people to places and opportunities. NACTO’s exemplary board, along with its incredible staff within the organization and across our 81 members, sets cities up with strong momentum in 2020 and beyond.”

“I’m honored to serve as President of the country’s most impactful organization dedicated to improving cities,” said Robin Hutcheson, Director of the Minneapolis Department of Public Works and NACTO President. “In transportation, we have some of our most pressing challenges and opportunities. From an existential climate crisis to an urgent need to improve equity, NACTO provides tools to act swiftly. I’m thrilled to help lead an organization that is charting a new course for North America’s streets and cities.”

“America’s cities are under immense strain, and new ways of thinking are required for us to not just cope, but thrive,” said Eulois Cleckley, Executive Director of the Denver Department of Transportation & Infrastructure and NACTO Vice President. “Cities are reinventing how we see our streets, and how we organize to improve them, all the way to creating a new department, as we did this month in Denver. Cities serve our communities best when we share our knowledge, and NACTO is an invaluable convener and thought leader, creating real change on the ground.”

The new board leadership first assumed duties today at the NACTO annual member meeting. See Robin Hutcheson and Eulois Cleckley’s full biographies, as well as the full NACTO board leadership at nacto.org/board.

About the National Association of City Transportation Officials (NACTO)
NACTO is an association of 81 major North American cities and transit agencies formed to exchange transportation ideas, insights, and practices and cooperatively approach national transportation issues. The organization’s mission is to build cities as places for people, with safe, sustainable, accessible, and equitable transportation choices that support a strong economy and vibrant quality of life. To learn more, visit nacto.org or follow us on Twitter at @NACTO.