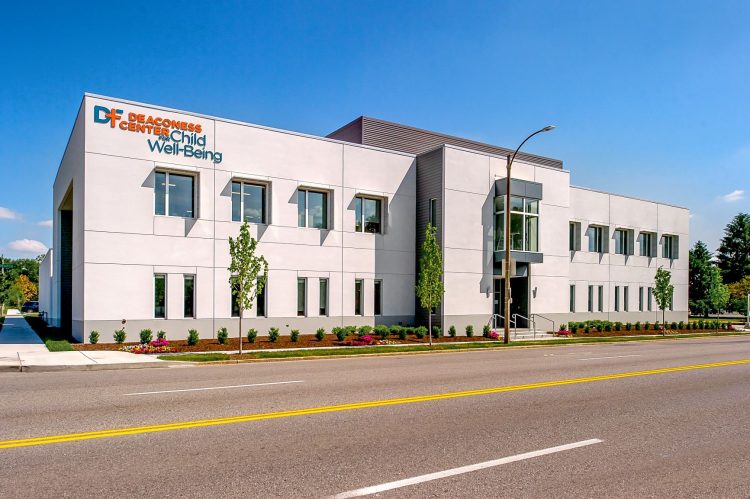 St. Louis, MO –  The Associated General Contractors of Missouri (AGCMO) presented KAI with a Keystone Award in the General Contractor Building Construction on a Project Under $15 million category on Nov. 4 for its design-build work on the Deaconess Center for Child Well-Being in St. Louis. The Keystone Awards honor the achievements of Missouri’s construction firms and their employees in building facilities that support and enhance quality of life.

Located at 1000 North Vandeventer Ave. in the Grand Center Arts District of St. Louis City, the 21,272-square-foot Deaconess Center for Child Well-Being was completed in less than eight months in December 2017. The two-level building provides meeting and office space for child advocates, civic leaders and community organizers dedicated to enhancing the well-being of at-risk children.

“We were so proud to have been a part of this transformative project for the community,” said KAI Enterprises President Darren L. James. “I can think of no better project than this one for making a difference in the lives of children who are at-risk. Thank you to the AGCMO for recognizing the importance of this project to the community.”

Time was of the essence on the project due to the Deaconess Foundation’s lease at its previous office space that was set to expire on December 31, 2017. Because of this, the organization chose to implement the project using the design-build delivery method with the added advantage of an interactive programming and design process provided by minority-owned KAI. The Deaconess Center was the foundation’s first new construction project in almost two decades.

In order to keep the project on schedule, KAI selected tilt-up concrete construction for the building’s exterior facade to assure the fastest possible building erection, as well as used vibrated stone piers to drastically reduce the owner’s site remediation cost and schedule impact.

The completed Deaconess Center features meeting rooms, a chapel, and a large conference space for up to 125 people, as well as administrative offices for the Deaconess Foundation, Vision for Children at Risk, and Neighborhood Houses—a United Church of Christ ministry that supports low-income children and families of the inner core of St. Louis City. The facility’s design incorporates many elements that appeal to children such as bright colors, eye-catching original art and furniture and garden spaces.

Every year, The Deaconess Center hosts more than 6,000 citizens in more than 250 meetings focused on children’s issues. Meeting rooms are available at no charge to initiatives focused on improving public policy for children. More than 40 people work at The Center, with many having relocated from various Deaconess Foundation offices throughout the St. Louis area.

KAI Enterprises is a national design and build firm providing delivery-oriented building solutions with a diverse portfolio of experience, in-house multi-discipline professionals, and expertise in both design and construction delivery. Founded in 1980, KAI has grown into one of the largest minority-owned firms in the AEC industry. For nearly 40 years, KAI has been instrumental in transforming communities through its expertise in residential, commercial, K-12, higher education, healthcare, science and technology, aviation, mobility, sports and entertainment, government, water and community-focused projects. KAI Enterprises is comprised of four distinct business units—KAI Design, KAI Engineering, KAI Build and KAI 360 Construction Services. To learn more about KAI, visit www.kai-db.com