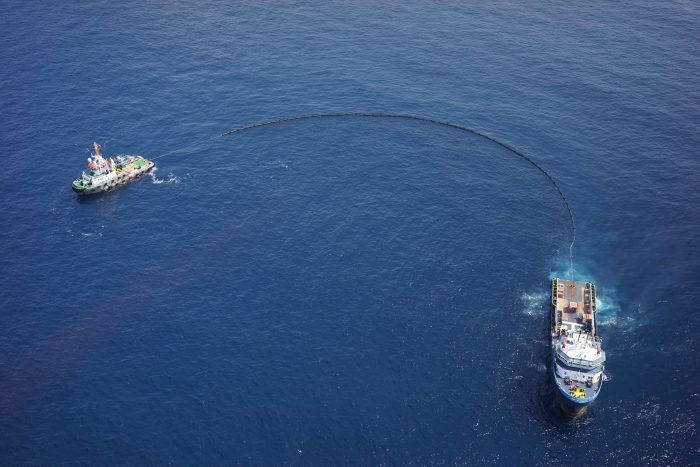 Luanda  – Terra Drone Angola, a group company of the world’s leading provider of industrial drone solutions Terra Drone Corporation, has successfully demonstrated at an offshore oil field in Angola how drones can be used as a surveillance and reconnaissance tool for oil spill incidents. The pilot project was conducted for a major oil and gas operator in West Africa.

Offshore oil spills are a cause of great concern not only because of the economic losses but also because of their adverse impact on the environment and marine ecosystem. They need to be handled quickly and effectively. To launch an effective response to oil spills, rapid preliminary survey assessments are necessary. For this, unmanned aerial vehicles (UAVs) prove to be safer, faster, and cheaper than the traditional method of using helicopters or manned flight operations. The decision-making process for key stakeholders becomes more efficient with swift access to data.

Further, drones can be kept in the air for as long as required – only needing to land to replace batteries when depleted. They are also a much more viable option logistically because a team of just two operators can conduct UAV flight operations for up to 10 hours each day.

In the exercise conducted by Terra Drone Angola, environmentally-friendly colored dye was released at the surface of the sea to simulate an oil spill. To help the energy company identify the location of the simulated oil spill and assess the surface area of the spill, an octocopter fitted with RGB camera and polarizing filter was used. Six flights were flown to attempt locating and sizing the simulated spill and showcase how drones can be used to collect crucial information in an emergency response situation.

Siva Keresnasami, Operations Director, Terra Drone Angola, said, “It is inevitable that drone operations will play an integral role in activities like these in the future. Drones are fast and effective, and they equip decision-makers with the exact information needed to enable them to make correct decisions in the field.”

Apart from monitoring oil spill response, drones can also be used by oil and gas operators for several asset management activities, such as inspections of flare stacks, underdeck, hull, internal tanks, and pipelines. Drones are equally capable of performing large-scale aerial surveys which can be used for environmental baseline studies, gas leak detection, as well as 3D modeling of assets.

About Terra Drone Corporation
Established in 2016, Terra Drone Corporation has quickly become one of the world’s largest industrial drone solution companies employing over 500 drone industry professionals. The company’s head office is located in Tokyo, Japan, and more than 25 branches are spread globally throughout Asia, Europe, Americas, Africa, and Oceania. Terra Drone provides innovative enterprise drone services for oil and gas, utilities, renewables, mining, construction, and GIS sectors, among others.
Terra Drone provides end-to-end solutions specializing in each sector by using high-performance hardware, cutting-edge software and customizable drone traffic management systems (UTM). The company actively invests in UAV technology providers to help them promote their products and services in the global market.
For all the latest news and information about Terra Drone, visit the company’s LinkedIn and Twitter handles