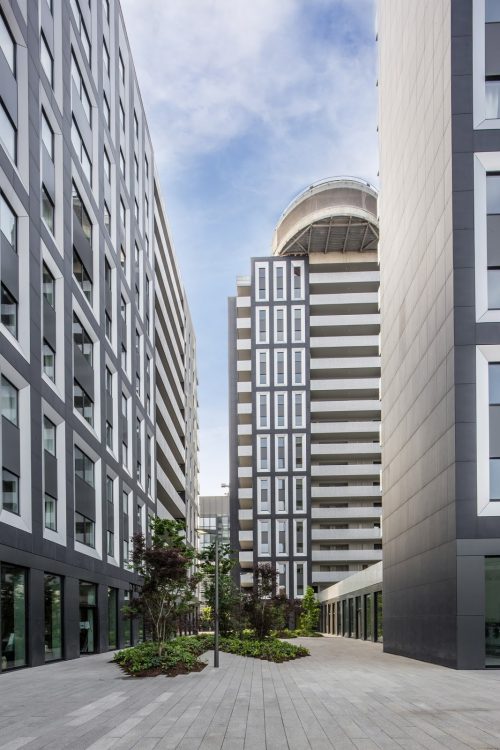 Launching in June 2019, the coliving space, Flatmates, will start moving in 600 residents from French billionaire Xavier Niel’s nearby coworking campus. The building, consisting of 100 shared apartments,  café, private lounge bar and space for events, is available to entrepreneurs, freelancers, startups, or staff members working within the STATION F campus.

As an architecture and design studio, Cutwork specializes in coworking, coliving, and new types of hospitality spaces with designs that help build better communities. They were challenged to imagine the future of shared living spaces and to design UN-traditional bedrooms and living space to best support these emerging lifestyles and communities.

Working closely with the team at STATION F and project architects Wilmotte & Associés, they designed flexible spaces that can easily adapt throughout the day for how the residents need to use them. This included designing 15 custom pieces of furniture specifically for coliving and shared usages. 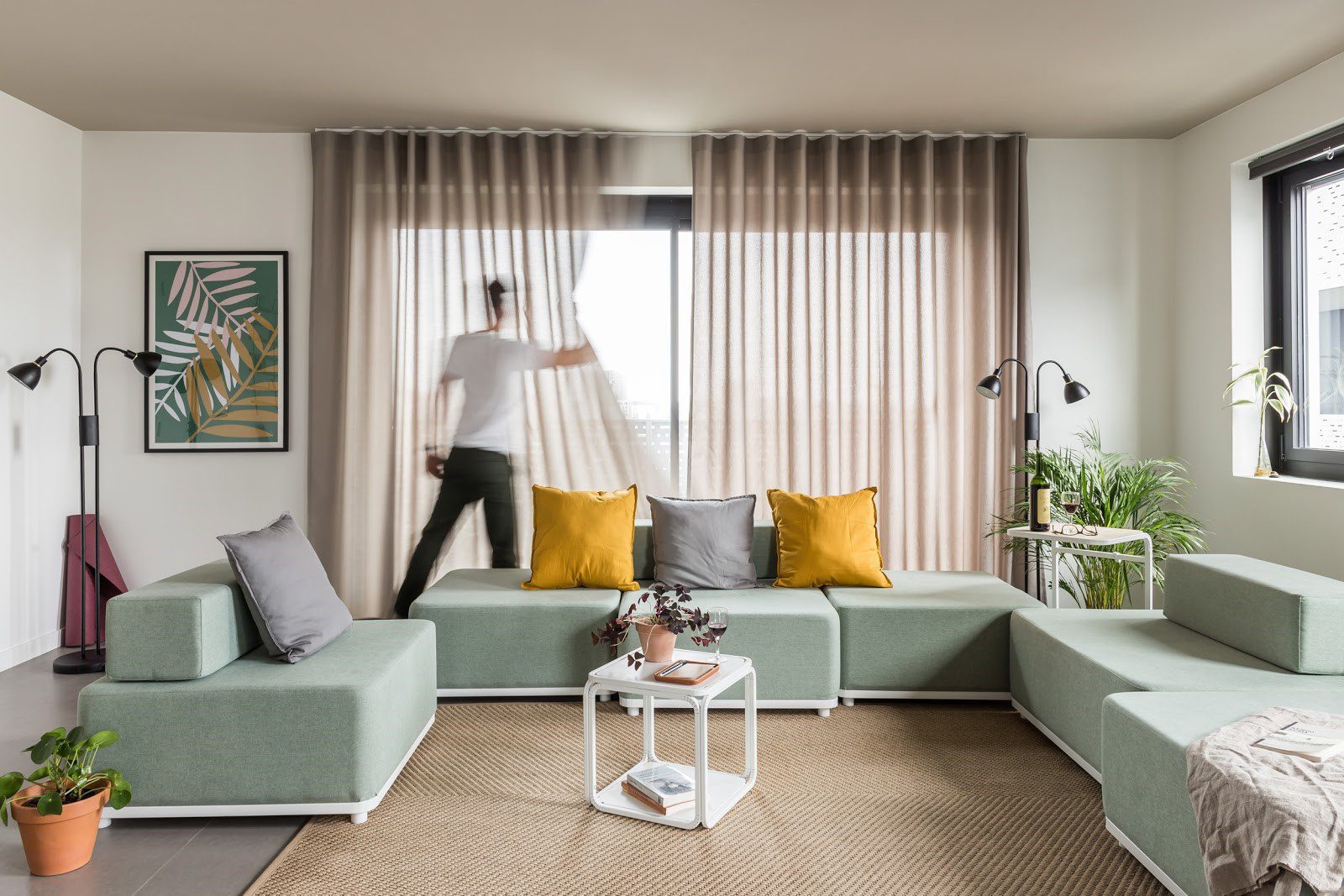 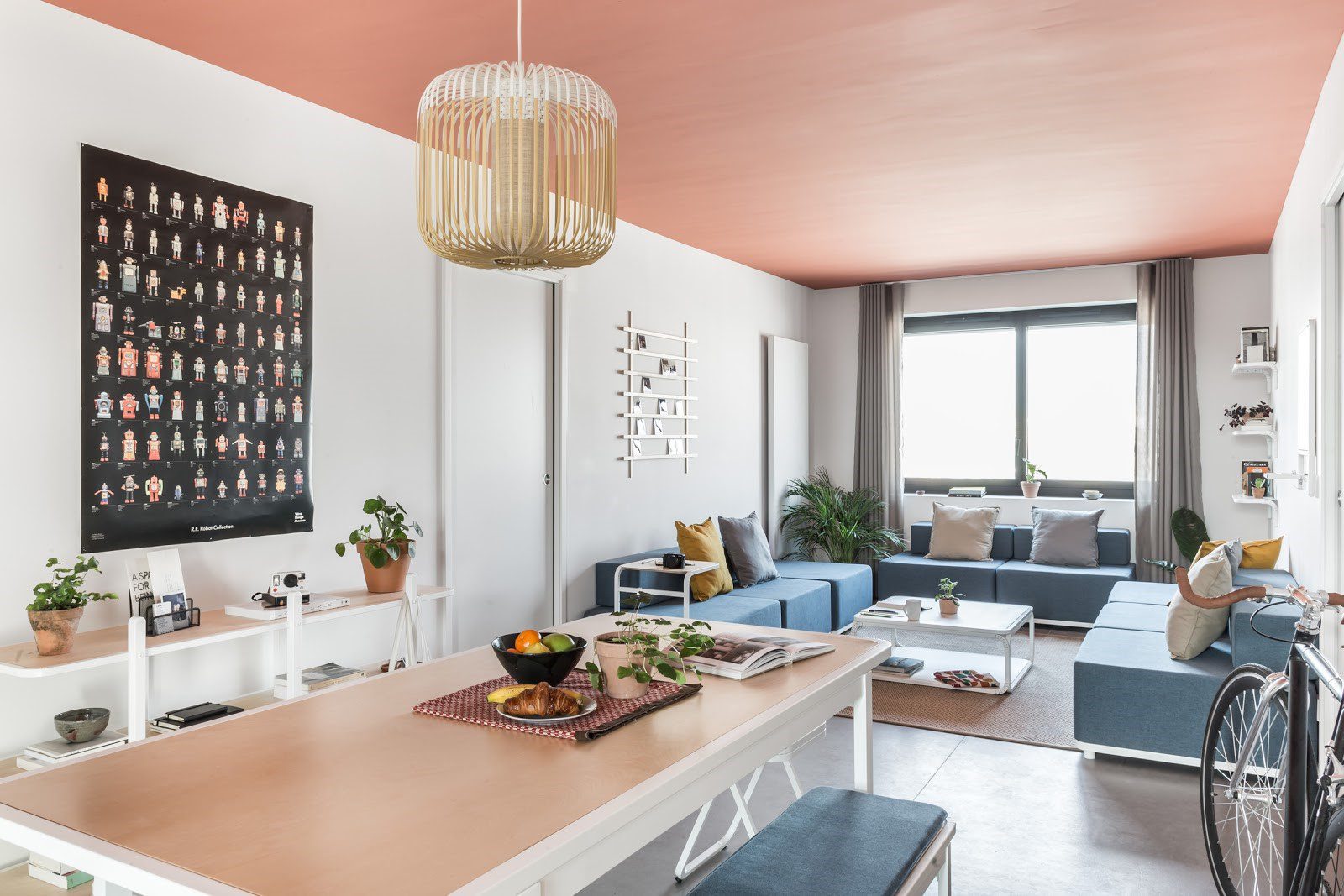 “In Japanese culture, space is not only defined by the relationships between objects and walls, but also by the interactions and relationships between people. Rather than having a single word for ‘space,’ there are many words for space, each with its own social intention,” says Antonin Yuji Maeno, Cutwork Cofounder and Lead Architect.

“For Flatmates, we developed a community-centered design philosophy with three Japanese words for space: WA 和 – BA 場 – MA 間.” “WA 和 is space for deep focus, introspection, and understanding one’s self in relation to others. BA 場 is space for collaboration, extroversion, and knowledge-sharing. MA 間 is space for the spontaneous and unexpected – the collision of people and ideas.”

“In Japanese culture, a harmony of space is found when all three of these concepts are present. Cutwork designed Flatmates so that the shared spaces can intuitively be arranged and used in each of these ways as the residents need.”

Cutwork is founded on patented industrial technologies that enable new flexibility in design, manufacturing, and shipping. Built around advancements in laser cutting and digital design files, Cutwork can produce custom furniture easily and cost-effectively, carrying out interior concepts with full-control over the design and manufacturing process.

This signature technology was the basis for the furniture designed for STATION F and again for Flatmates. “We oversaw the entire interior concept, designing 15 custom furniture products for 100 apartments. We delivered over 5000 pieces of furniture created using our signature ‘bend’ technology,” says Cutwork Cofounder and CEO, Kelsea Crawford. “The products are minimal, multi-functional, and built tough for heavy everyday use, which is vital for coworking and coliving spaces.”

Cutwork believes in sustainable design. All of the studio’s products are produced on-demand on a project-basis (no warehousing, no overproduction). In 2018, Cutwork was named in the Top 30 CleanTech companies in Europe.

In the same way coworking has completely redefined the concept of workspace in just a few short years, coliving is following closely behind with even greater potential to radically change the way we build our cities, communities, and lifestyles. “Together, these new models of cohabitation are going to be the most disruptive thing to happen to real estate since the commercial office tower and modern apartment block,” says Antonin Yuji Maeno, Cutwork cofounder and Lead Architect.

Cutwork is conducting research on five key developments that are driving a fundamental shift in the way we live and work: rapid urbanization, the shared economy, rise of the freelancer, the epidemic of loneliness, and fall of the nuclear family. Coworking and coliving have emerged as leading contenders to help address such challenges – entirely new formulations of space built on the principles of community, mobility, sharing, flexibility, and innovative thinking.

As a studio specialized in the design of these spaces, and thought leaders in this field, Cutwork’s team understands that architecture and design must adapt quickly and find complimentary new forms to support the emerging lifestyles and communities of the 21st century. Their studio is focused on designing innovative solutions to help overcome these challenges, working with pioneering companies who are reimagining the ways we live and work.

Cutwork are an award-winning architecture and design studio specialising in coworking and coliving spaces. They design innovative spaces and furniture for pioneering companies who are reimagining the ways we live and work.  Drawing from a deep knowledge and expertise in coworking, coliving, innovation hubs, and next-generation hospitality experiences, Cutwork design smart, multi-use architectural and interior concepts that make it easy to constantly transform a space, build better communities, and encourage collaboration. In 2018, Cutwork was included in the EIT Climate-KIC list of Europe’s top 30 cleantech startups. Recent projects include STATION F, the largest startup campus in the world. Cutwork also designed the full interior concept for co-living space Flatmates, the first large-scale co-living space in Paris for 600 entrepreneurs.

STATION F is the largest startup campus in the world, backed by Xavier Niel. Open since June 2017 in Paris, we house 1000+ startups. The 34,000m2 building also houses a makerspace, an auditorium and other event spaces, restaurants and bars, a pop-up store, on-site services, a post-office and partner offices and programs. Flatmates is a unique co-living space for our entrepreneurs created by STATION F. The coliving space is well connected by public transportation and there is a direct bike path between STATION F and Flatmates. The RER station Ivry-sur-Seine is at 10-min walking distance and the metro station Pierre et Marie Curie (line 7) is at 15-min walking distance.

Founded in 1975 by Jean-Michel Wilmotte, the architectural practice is renowned for the diversity of its output and the elegance and excellent finishing quality of its work. The business is structured around two companies – architecture firm Wilmotte & Associés and design studio Wilmotte & Industries SAS –, operating more than 100 projects at any one time. Wilmotte operates in both the public and private sectors, across luxury, hospitality, residential, and the service industries uniting 270 employees of 25 different nationalities, and operates in 20 countries. Established in Paris and Nice, its international development brought about the launch of two subsidiary companies: Wilmotte UK Ltd in London, and Wilmotte Italia Srl in Venice. The firm is also represented by an office in Seoul.

Comments are disabled
NEXT ARTICLE
Geographers of the Lomonosov Moscow State University published the web-atlas of the available wave energy in the Russian seas
July 16, 2019
PREVIOUS ARTICLE
71 International Underground Construction Projects and Young Engineers in Competition for the ITA Tunnelling Awards
July 16, 2019