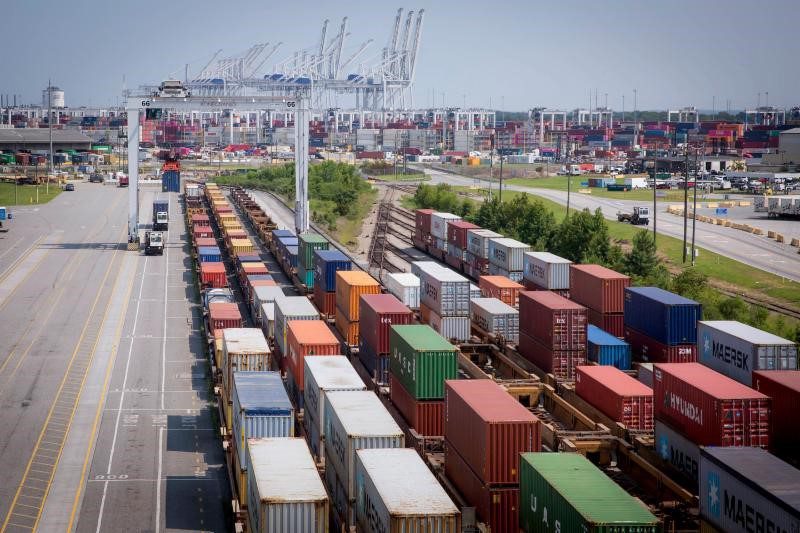 SAVANNAH, Ga., – The Board of Directors of the Georgia Ports Authority today elected William D. McKnight as chairman.

“As an entrepreneur and business leader with more than 30 years in the construction industry, Will McKnight has the experience necessary to keep GPA at the forefront, delivering opportunity for growth to large and small businesses across the state,” said Georgia Gov. Brian Kemp.

McKnight, who has served as vice chairman since 2018, will assume his new responsibilities July 1.

“I’m excited to help lead the GPA at a time when Gov. Kemp has made the success of small business a major priority,” McKnight said. “Our ports’ role in helping Georgia companies connect with buyers across the globe can mean a world of difference to small operations hoping to expand.”

Along with McKnight, the board elected Patrick “Kelly” Farr Jr. as vice chairman, while Joel Wooten will remain in his role as secretary-treasurer.

“During Jimmy’s tenure, we’ve seen the completion of the outer harbor deepening, we’ve purchased 10 ship-to-shore cranes, kicked off construction of the largest on-terminal rail facility in the country, and expanded our auto capacity,” McKnight said. “Now, we have to continue that momentum to bring the efficiencies of Georgia’s deepwater terminals to even more customers.”

“I am proud to say that the team here at your ports are the best trained, most experienced and dedicated professionals you will find anywhere in the world, and I don’t say that lightly,” said Allgood.  “Over the course of my career, I have had the opportunity to work with many boards, staff members and customers and what we have managed to build at Georgia’s ports is world class and second to none. Thank you, team, for a job well done.”

In other business, GPA Executive Director Griff Lynch reported the Port of Savannah had its busiest April ever, pushing its fiscal year-to-date totals to 3.7 million TEUs, an increase of 8.7 percent (300,815 TEUs) compared to the same period in FY2018.

“We’re nearly a full month ahead of last year’s volume at this point,” Lynch said. “GPA’s 1,300 employees, the International Longshoremen’s Association, stevedores, motor carriers and professionals throughout the supply chain have pulled together to not only grow our business, but to handle it with great efficiency and care.”

Total container cargo in April reached record volumes of 364,481 TEUs at the Port of Savannah, an increase of 1.9 percent or 6,700 TEUs.

The board also authorized an expansion of auto-handling capacity at the Port of Brunswick, approving $6.7 million for the Colonel’s Island North Side Paving Project – Phase I. The project includes upgrades of approximately 33 acres, new pavement striping, and new facility gates for trucks and other vehicles. The project will accommodate BMW, one of Georgia’s longest standing and largest auto processing customers. Recently, GPA and BMW renewed a multi-year agreement to move the luxury vehicles over Colonel’s Island Terminal.

“For BMW, the Port of Brunswick is perfectly situated to serve the Southeastern U.S. because of its proximity to our customers and easy reach by Interstates 95 and 16,” said Irene Bloomfield, vehicle distribution center business and transportation manager at BMW North America. “The port’s reliability and detail-oriented customer care makes Brunswick a trusted link in the BMW supply chain.”

William McKnight was born and raised in Augusta, Georgia.  He graduated from The Academy of Richmond County in 1974 and from The Georgia Institute of Technology in 1979.  Following his graduation from Tech, he continued to work for his family-owned construction company in Augusta and has been the President since 1996. Mr. McKnight has overseen the completion of over $1 billion in construction projects.

In addition to Mr. McKnight’s extensive career in the construction industry, he has remained active in his community by serving and chairing many boards and committees.   He was named Chairman of the Board of Directors of the First Bank of Georgia in May 2010 and then served on the board of State Bank which sold to Cadence Bank in 2018.  He is the past President and continued member of both the Augusta Country Club and Augusta Golf Association, and he has served on the boards of Associated General Contractors of America, Augusta Ballet, Richmond Academy Booster Club, Tuttle-Newton Home, Episcopal Day School and First Tee.  Mr. McKnight is a member of the Exchange Club of Augusta and Trinity on the Hill United Methodist Church. He has served on the Georgia Ports Authority since 2014 where he has chaired the Development Committee and Finance Committee and served as the Secretary Treasurer and currently Vice Chairman. He is a member of Ocean Forest Golf Club, Sea Island Golf Club, and the Augusta National Golf Club where he has served on the Gallery Committee of the Masters since 2000 and is presently Chairman of the Grounds Committee for the Masters.  He has also been a member of the Planning and Development Committee for AU Foundation as well as the Consolidation Committee for MCG and Augusta State University.

Patrick “Kelly” Farr Jr., a native of Martinez, Ga., holds a bachelor’s degree in Finance from Augusta University. He currently serves as director of the Governor’s Office of Planning & Budget. Farr resides in Cumming with his wife, Jennifer, and two children, Trey and Sydney. Farr offers significant expertise in business development from his work at Lucent Technologies, Capgemini, and most recently, SAS Institute. In these capacities, Farr worked extensively with various state agencies to implement technological advances and improve constituent service. Farr also previously served as Deputy Secretary of State for the Georgia Secretary of State’s Office, responsible for budget management and oversight of daily operations.

Joel O. Wooten is an attorney with the law firm of Butler Wooten & Peak, LLP. He served as chair of the University System of Georgia Board of Regents from 2004-2005 and was a board member from 1999-2006. He has been recognized as one of Georgia Trend’s 100 Most Influential Georgians, and has been repeatedly selected as a Georgia Super Lawyer. He received the State Bar of Georgia’s Tradition of Excellence Award in 2000 and the UGA Law School’s Distinguished Service Scroll in 2012. Wooten earned a bachelor’s degree in business administration from the University of Georgia in 1972, and earned a law degree from the University of Georgia in 1975. He and his wife, Sybrina, have five children and four grandchildren. They reside in Columbus