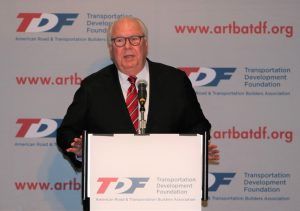 WASHINGTON – William D. Toohey, Jr., a long-time American Road & Transportation Builders Association (ARTBA) senior executive, is the 2018 recipient of the organization’s highest honor—the “ARTBA Award.”  It was presented May 14 during the Federal Issues Program in the Nation’s Capital.

Established in 1960, the ARTBA Award recognizes individuals for outstanding contributions that have advanced the broad goals of the association. Over the years, recipients have included several governors, more than 25 U.S. senators or representatives, two U.S. secretaries of transportation and dozens of top leaders and executives from government and the private sector of the transportation construction industry.

Toohey, who retired in April as ARTBA executive vice president and COO, was recognized for 34 years of leadership and executive management of the government relations, policy, member services and marketing functions. Over the years, he was the architect of innovative policies such as the Critical Commerce Corridors goods movement program.

Toohey also spearheaded development of the industry’s surface transportation reauthorization policy proposals—and the task forces that produced them—dating back to the late 1980s. Because of his efforts and ARTBA’s leadership in framing the policy debate, nearly a dozen federal transportation investment bills have become the law of the land.

Bill and his wife Mary reside in Maryland. They have three adult children, Bridget, Bill and Mike, and one grandson, Drew.

Established in 1902, Washington, D.C.-based ARTBA is the “consensus voice” of the U.S. transportation design and construction industry before Congress, the White House, federal agencies, news media and the general public