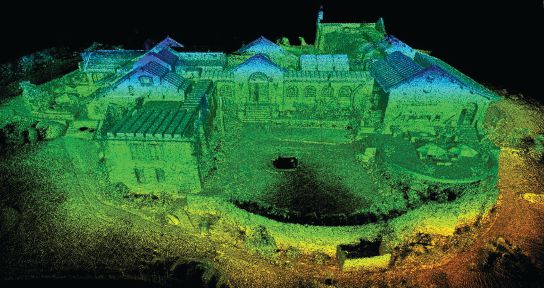 A complete 3D point cloud of an entire property is viewed in CloudCompare.

As residential real estate prices continue to climb in many parts of the United States, property owners are increasingly investing in renovations and additions to their existing homes. To meet the demand, architects seek digital as-built documentation of the structures so they can design the new construction. Many are asking for mobile 3D scanning by name as the technology they prefer to quickly capture the accurate, comprehensive as-built detail needed to start the design work.

Business is booming for Precision Property Measurements (PPM), a Long Beach, Calif., firm that has provided as-built documentation services to Architecture, Engineering and Construction (AEC) clients for more than 16 years. PPM deploys its 3D scanning crews to a variety of commercial and retail sites, but the bulk of demand is in residential right now.

“The real estate market is what drives our business,” says Andy McFarland, PPM president. “People are deciding it’s worth spending money on their own houses.”

He explained that when the residential market heats up, it makes better financial sense for a family to renovate or add onto its existing home instead of buying a larger one. These changes include expanding square footage with new room additions, converting garages to additional dwelling units, and putting second floors on single-story houses.

Regardless of whether the renovation is a kitchen remodel or room addition, the architect typically requests documentation of the existing as-built structure for use as the starting point to design the new project. When PPM went into business, its primary field tool was the laser distance meter, essentially a digital tape measure that recorded the distance between two points.

“For a typical 2,500-square-foot home, we would collect hundreds—sometimes more than a thousand—dimension measurements,” adds McFarland.

Although accurate, the laser distance meter had two significant disadvantages. The first was its inefficiency. Later versions of these devices recorded measurements directly into drafting software via Bluetooth connection, but the procedure still was manual, often taking an entire eight-hour day to collect measurements for hundreds of dimensions in the home.

The bigger drawback was the lack of comprehensive detail in the final product. The laser distance meter just couldn’t capture the odd angles of vaulted ceilings or any type of curved walls. It was limited to rectangular rooms and 90-degree corners. Creating a complete as-built model of an interior space in three dimensions was difficult and time consuming.

One of PPM’s longtime clients, Letter Four Inc., a design-build firm based in Culver City, Calif., saw a move toward 3D beginning to develop among the larger AEC businesses and decided to make the switch.

“The future of drafting is not 2D; it is clearly 3D,” notes Lauren Adams, Letter Four principal and co-owner.

3D in the House

As more architects began to design in digital 3D environments, thanks in part to the popularity of Revit software from Autodesk, the demand grew for 3D as-built data capture. PPM, however, believed it saw a viable indoor scanning solution in 2016.

“We had a demo of a mobile laser scanner using SLAM technology and began focusing on it as the solution we needed,” says Greg Davies, PPM’s director of survey technology.

Only a few commercial scanners incorporated the Simultaneous Localization and Mapping (SLAM) technology, and PPM selected the ZEB-REVO Solution from GeoSLAM. Weighing only two pounds, the handheld scanner is light, versatile and simple to use, collecting more than 43,000 points per second at typical walking speed. The software element provides point cloud processing, coloring, merging and vectorizing—all with a simple “drag and drop” functionality.

“The solution has reduced time onsite to one quarter [of what it previously took],” notes Davies, making the technology particularly appealing to residential architects, because private homeowners don’t like crews spending a lot of time inside their homes.

PPM has purchased three GeoSLAM systems, and they’re in use almost continuously. The firm deploys them on residential scanning jobs of all sizes, from 1,500-square-feet bungalows to 20,000-square-feet mansions, in addition to a variety of retail and commercial assignments. The architects at Letter Four now contract for 3D laser scanning on every home renovation project they win. 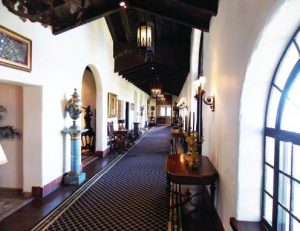 On a typical scanning project in a home, the PPM surveyor arrives with the handheld ZEB-REVO linked to a data storage laptop in a backpack. Site preparation is remarkably low key. The technician usually just opens all the doors to rooms and closets and makes sure there’s a clear path to walk in every room.

“The key to good scanning is to make loops wherever possible—around each floor and in each room,” says Davies.

The surveyor enters a room through a door and makes a circuit around the space, holding the scanner and walking at normal speed. The compact scanner can easily be held inside closets or other areas too small for a person to enter. After a room has been scanned, the surveyor leaves through the same door to close the loop. In addition to making looping traverses in each room, the technician completes a similar circular pattern around the whole of every floor, if feasible. A final scan around the structure’s exterior also is made.

After scanning is complete, the technician stays onsite and boots up the GeoSLAM Hub software on the laptop. With ZEB-REVO, the data are processed in roughly the same amount of time as data collection. Had the team used a ZEB-REVO Real Time unit, processing would occur simultaneously while they scan. The technician views the 3D point clouds onscreen and notes areas where the data are incomplete.

“We always double check the quality of the data before we leave; just in case we need to go back in and rescan some areas,” notes Davies. “You bring the whole house back to the office with you.”

The homes being scanned are almost always furnished, he explains, which can create object shadows (or occlusions). Rescans of some areas in a house are common, but they’re much less costly to the overall project budget if made on the first visit, which the onsite point cloud processing makes possible.

“In the past, we sent our field crews out in the morning [for a residential job] and didn’t see them all day, or sometimes two,” notes Davies. “Now they’re back in time for lunch.”

After less than two and a half hours of scanning, the survey team has a complete dataset for producing detailed and accurate floorplans. The same information collected with a static scanner would have taken 1-2 days to complete.

Back in the office, further data processing is performed using the Hub software. Depending on the job, technicians may use the software to merge multiple datasets, view and manipulate the point cloud, and cut out sections (such as elevations) for different applications.

The point cloud data are transferred from the GeoSLAM system to robust computers for further processing. The first step is Autodesk Recap, where the files are converted into a format for exploitation in AutoCAD or Revit, depending on end-user requirements. From the 3D point cloud, PPM technicians extract the structural features of the home desired by the architect.

The accuracy in the models is exceptional, according to Davies, especially considering how quickly the data are collected in the field. For most architectural design projects, PPM’s goal is to measure features to an accuracy of 0.5 inches, but the firm is routinely achieving 0.25-inch accuracy with the GeoSLAM system. Just as importantly, if two walls meet at an angle of 89 degrees, the mobile scanner captures that geometry precisely, instead of assuming it’s a 90-degree right angle.

“With the old manual method, measurements and geometry never quite added up exactly,” notes Davies. “But with mobile scanning, everything is captured [correctly] in the point cloud.”

The typical deliverable for a residential project is a 2D AutoCAD file or 3D Revit file, plus a series of 2D construction drawings in PDF format. PPM has found that many architects as well as structural and mechanical engineers can work directly with the digital BIM, usually in Revit.

“3-D as-builts provide us with the complete picture of the existing home,” says Letter Four’s Adams. “The model we receive is an essential part of our design process, and the basis for our remodels and additions.”

Letter Four uses a wholistic approach for every project and builds upon the as-built model to ensure that the massing and proportions of their residential projects are correct from every angle. Although local government zoning and permitting agencies still require submission of 2D documents, Letter Four finds that clients appreciate seeing proposed designs in three dimensions. These 3D visualizations of planned renovations also are often required for homeowner associations, design reviews and historic preservation boards.

“We find that 3D models created from GeoSLAM point clouds are very accurate and help eliminate potential discrepancies that can occur when working in two dimensions,” adds Adams.