WSP Salutes NCDOT on Opening of the Marc Basnight Bridge 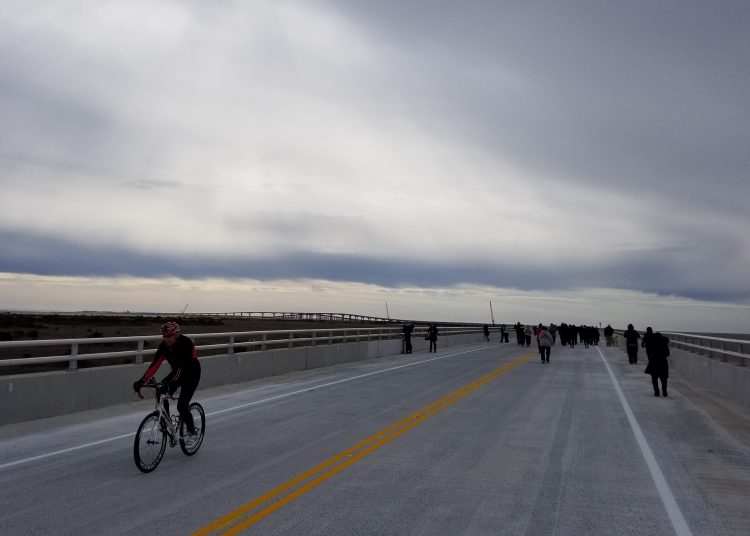 A ribbon-cutting ceremony to celebrate the completion of the new bridge, named in honor of former State Senator Marc Basnight, is scheduled for April 2. The new, 2.8-mile-long Marc Basnight Bridge between Hatteras and Bodie islands replaces the 56-year-old Herbert C. Bonner Bridge, which will be demolished later this year. The new segmental concrete box girder bridge, which carries Highway 12 over the Oregon Inlet, has two traffic lanes with shoulders for pedestrians and cyclists.

“We congratulate our long-time client, the North Carolina Department of Transportation, on the successful completion of the new Marc Basnight Bridge,” said Pamela Townsend, Southeast regional manager for transportation at WSP USA. “The planning, design and construction of this magnificent new structure has lasted three decades, and the department has had to overcome many challenges, particularly in resolving environmental legal issues.”

“WSP was proud to serve the department in a variety of roles over many years to reach today’s milestone event. We join our client, other members of the project team, and our neighbors in celebrating this critical link in the transportation system of the Outer Banks,” Townsend said.

Since the 1990s, WSP has served NCDOT in a variety of planning, environmental, and inspection roles on the new bridge. The firm prepared a feasibility study and a bridge type study for replacing the old bridge. Following the selection of a preferred alternative (a new bridge parallel to the existing bridge), WSP prepared plans, specifications and estimates for the replacement structure.

Planning for the new bridge began in 1989. Eight design options were considered, including the option ultimately selected—a new bridge parallel and to the west of the original bridge. A draft environmental impact statement (DEIS) was prepared in 1993. A supplemental DEIS was prepared in 2005 and revised in 2007. A final EIS was completed in 2008. A Record of Decision (ROD) approving the final EIS was received from the Federal Highway Administration (FHWA) in 2010.

A contract to design and build the bridge was awarded in 2011, but lawsuits filed by the Southern Environmental Law Center delayed the start of construction until a settlement was reached in 2015. Construction on the new bridge began in March 2016.

Earlier this year, NCDOT hosted a community celebration during which residents and visitors to the Outer Banks were invited to walk and bike across the new bridge, following brief remarks by officials of NCDOT, the Dare County Commission, and the National Parks Service. The NCDOT passed a resolution to name the new bridge in honor of Basnight on March 7.

WSP is also supporting NCDOT in the planning and preliminary engineering of another Outer Banks bridge, the Mid-Currituck Bridge, that has been in the planning stages for decades.  Earlier this month the bridge over the Currituck Sound received a ROD from FHWA, allowing the bridge to move forward.

“We’re pleased to support North Carolina DOT on the Mid-Currituck Bridge, and look forward to the day when that bridge too will open to traffic,” said Townsend.

Other WSP projects in North Carolina include the design of a major airfield expansion project for Charlotte Douglas International Airport, design of express lanes on I-485 in Charlotte, design of the first segment of the completion of NC 540, and planning for the Charlotte Area Transit System (CATS) LYNX light rail expansion.
About WSP USA

WSP USA is the U.S. operating company of WSP, one of the world’s leading engineering and professional services firms. Dedicated to serving local communities, we are engineers, planners, technical experts, strategic advisors and construction management professionals. WSP USA designs lasting solutions in the buildings, transportation, energy, water and environment markets. With more than 9,500 employees in 150 offices across the U.S., we partner with our clients to help communities prosper. wsp.com