/ Articles / Thoughts From Engineers: Rethinking the Water We Drink

Thoughts From Engineers: Rethinking the Water We Drink

Although it may come as a surprise to some, a few communities in the United States must work harder and invest more to secure clean drinking water every day. In a particularly bone-dry part of the country, one municipality has been working on a thorny water-supply problem for quite some time.

The city of El Paso, Texas, is on the cusp of making fully operational a water-filtration system that eliminates one major step in what has been a standard water-treatment process. Instead of reinjecting treated wastewater back into the aquifer where it percolates through the ground for several years before reuse, the city is taking a shortcut. El Paso is electing to move wastewater through additional cycles of purification and filtration before sending it back into the drinking-water distribution system.

If you suspect there may be some resistance to drinking water that has only recently been in the waste stream, you would be right. Some communities in Arizona and California have refused to make the leap (the water-supply situation apparently isn’t dire enough). The residents of El Paso, however, have been forced to “grow up” a lot sooner than most U.S. residents. Decreasing snowmelt, which has historically fed the Rio Grande River, and warmer temperatures attributed to climate change have combined to make a bad situation even worse. El Paso residents know they need to find creative ways to reuse water in a desert, or the city’s water supply quietly but surely dries up.

We Live in a Desert, After All

The choice to cycle wastewater back into the drinking supply is no overnight decision. El Paso, with more than 700,000 residents, has been coming to terms with the tough, take-no-prisoners character of its desert location for many years now.

Under the leadership of Ed Acrhuleta in the late 1980s, the El Paso Water Utility became serious about finding alternative sources for drinking water. One of Acrhuleta’s first projects was to lobby Congress for funding to build the largest inland water desalination plant in the nation to tap the huge reservoir (30 million acre feet) of brackish water perched under the city’s freshwater aquifer. The city projects that the Kay Bailey Hutchison Desalination Plant will produce 7 to 9 percent of the city’s water in 2019. 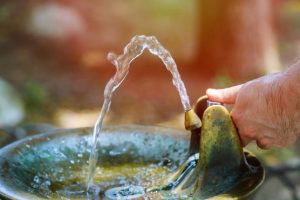 In addition to finding alternative sources of drinking water, Acrhuleta made education about the city’s water supply a priority. A comprehensive program designed to educate school children and city residents about the origin of the city’s water supply and the realities of multiple user demands, from agriculture to industry, was quickly implemented under his watch. A museum dedicated to water issues was built, a campaign to engage school children was launched, and a business-based “water hero” effort gained popularity. Nearly 30 years later, water-conservation programs still are going strong; El Paso residents are educated and primed to consider the unthinkable: drinking wastewater.

Using a process known as advanced water purification, the El Paso water treatment facility (EPWater) uses a process consisting of membrane technology, reverse osmosis, UV disinfection with additional oxidation, and carbon filtration to clean wastewater to drinking-water standards. Up to 10 million gallons of drinkable water will be produced per day using this process.

Preliminary testing of thousands of samples shows that water produced with this process consistently exceeds U.S. drinking-water primary and secondary standards. Water treated by the facility will supplement El Paso’s other sources of water: groundwater, water from the desalination plant, and the Rio Grande River. If all goes well, the proportion of drinking water produced through this four-step filtration process is expected to increase as El Paso’s population grows.

The management program implemented by El Paso more than 20 years ago doesn’t stop with water treatment. Like the holistic water system it aims to be, the city tackles water quality and supply issues from all angles. EPWater regularly purchases land and water rights in the watershed and now owns 57,000 acres. Working closely with the Department of Civil Engineering at New Mexico State University, the city meticulously collects baseline data and boasts a sophisticated grasp of the region’s water cycles, including wet and dry periods. During periods of surplus, the city replenishes the underlying aquifer and stores water.

Will El Paso’s policies and infrastructure provide insight into how water across the country might be managed in the future? Will communities increasingly be required to manage scarce water resources with the precision and accuracy of a swiss watch piece?

Perhaps in the future, circumstances across the western United States will demand a new standard: recycling of wastewater and nearly all flow accounted for. Unlike most municipalities, El Paso already is a seasoned water scavenger, ready for hard times and prepared for worse.

Comments are disabled
NEXT ARTICLE
Storm on the Horizon: Sewage Overflow Is a Problem for Today, Not Tomorrow
March 4, 2019
PREVIOUS ARTICLE
HED and Integrated Design Group Announce Merger
March 4, 2019