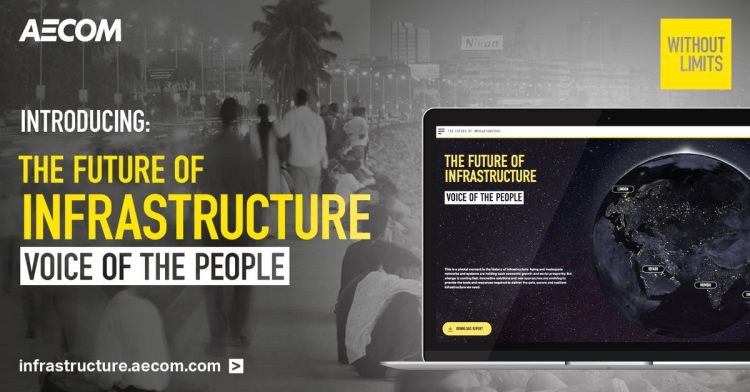 “Residents of cities around the world want greater say in infrastructure planning, and they are growing impatient with delays in the delivery of modern infrastructure systems that can improve mobility, connectivity and quality of life,’’ says AECOM Chairman and Chief Executive Officer Michael S. Burke. “Their views should be a call to action for wider government engagement, and new public and private partnerships that can advance ideas, funding and advocacy, and speed the projects that lead to growth and urban well-being.”

The survey’s results showed that while every city has its own distinct identity, people around the world share similar views and experiences with their infrastructure. While city dwellers have a positive outlook for the future, they are also restless for action to improve their infrastructure immediately. They are stressed when using public transportation and want their cities to be greener, safer and better connected. Most importantly, they want to have a voice in how infrastructure systems are planned, paid for, developed and operated.

This is a pivotal moment in the history of infrastructure. The Future of Infrastructure: Voice of the People report outlines ways that city authorities, infrastructure agencies, utility providers and business stakeholders can ensure greater strategic engagement to secure and maintain citizens’ support during projects, and following completion. It also provides guidance for aspiring smart cities about the benefit of exchanging data and ideas with companies, application developers and other innovators, as well as an opportunity to obtain citizens’ personal data if city authorities can ensure them it’s being handled securely and contributing to specific improvements. Lastly, the report confirms that sustainability continues to be important to residents, and with high public interest, green initiatives can boost engagement levels. While long-term planning is not going away, planners who adopt an agile approach can test, design and scale projects at pace — and engage more deeply with citizens.

The Future of Infrastructure: Voice of the People report has been produced by AECOM in collaboration with Longitude, a world-class leader in quantitative and qualitative research. The report was compiled in two ways. First, Longitude conducted an online survey of more than 10,000 people across 10 major global cities including Hong Kong (1031 respondents), Mumbai (1088), Singapore (1109), Sydney (1096), London (1118), Riyadh (980), Chicago (1014), Los Angeles (1121), New York (1128), and Toronto (1065). Respondents were not compensated for their participation and AECOM was not identified as the research sponsor. Second, the firm conducted qualitative interviews with a range of senior figures in the global civil infrastructure industry where AECOM was identified to them as the research sponsor.

To download The Future of Infrastructure: Voice of the People report or to review city-specific results, please visit www.infrastructure.aecom.com.

About AECOM
AECOM is built to deliver a better world. We design, build, finance and operate critical infrastructure assets for governments, businesses and organizations. As a fully integrated firm, we connect knowledge and experience across our global network of experts to help clients solve their most complex challenges. From high-performance buildings and infrastructure, to resilient communities and environments, to stable and secure nations, our work is transformative, differentiated and vital. A Fortune 500 firm, AECOM had revenue of approximately $20.2 billion during fiscal year 2018. See how we deliver what others can only imagine at aecom.com and @AECOM.