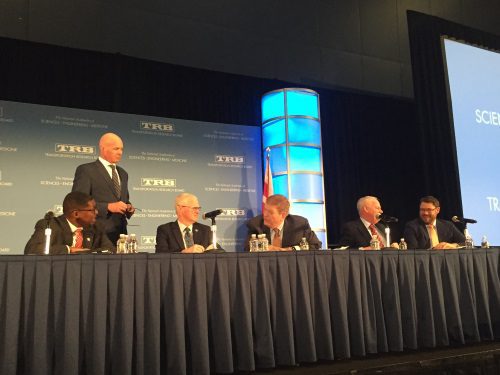 A panel of six state department of transportation executives delved into some of the issues surrounding U.S. surface transportation funding during the 2019 Transportation Research Board’s annual meeting in Washington, D.C.

Sponsored by the American Association of State Highway and Transportation Officials and moderated by Carlos Braceras, executive director of the Utah Department of Director and AASHTO’s 2018-2019 president, the group focused on the difficulties of maintaining and expanding a national transportation network with a dwindling amount of fiscal resources.

“This is a conversation about figuring out ways to advance transportation policy in the nation and how to fund it,” Braceras noted during the Jan. 15 session. “The problem is that, when transportation works, we don’t think about it – it’s when it doesn’t work the way it’s supposed to that people notice. That’s why increasing formula-based federal funding to the states is the main subject of our conversation.”

“We have tremendous capacity needs [and] our multimodal system will not sustain itself,” explained Shawn Wilson, secretary of the Louisiana Department of Transportation and Development. “Many urban corridors are deteriorating because our transportation infrastructure is 60 years old and we have not done anything to replace it. We’re struggling with a primarily ‘preservation approach’ to infrastructure.”

At the end of the day, Wilson said the “simple formula funding” mechanism for dispersing federal monies to the states for transportation needs remains the best way to provide fiscal support to the nation’s mobility system. “You have to give us the dollars and unleash them,” he stressed. “The discretionary pot [of funding] is not the way for balancing the needs of transportation in the future – not every state is created equal.”

[This TRB session was one of two featuring state DOT executives. You can access the other story by clicking here.]

“We rely heavily on federal funding, so reauthorization has a big impact on us,” he explained. “We need to be able to get things from one area of the country to another – that national system is very important; and the only way to get that is through a strong federal program. Formula funding works very well, with a small percentage going into discretionary funding. That’s the right way to go.”

Yet Kyle Schneweis, director of the Nebraska Department of Transportation, stressed that while the “role of federal funding remains critical” to his state’s transportation program, raising fuel taxes to generate more revenue for those efforts is “seen as aging dinosaur.”

“We can’t shut the door on things we don’t like, though that is hard to do as we’ve had so much success with our traditional programs,” he explained. “We have to get with the times and look for more proactive solutions.”

“We have to get the funding right because we are in a transition point of time,” added Georgia Department of Transportation Commissioner Russell McMurry.

“We need a bridge from where we are today to where we need to be in the future – a VMT [vehicle miles travelled] tax, user fees for electric vehicles, and other ideas in this emerging area. We have to think holistically about all of that; we have to think about how all of that works together for our transportation future.”

Yet Pete Rahn, Maryland’s transportation secretary and chairman of the Maryland Transportation Authority, noted that almost all previous federal surface transportation funding reauthorization efforts have been undertaken in a “crisis” environment, to the point where many in Congress have gotten used to it.

“Congress acts in a crisis; it’s not designed to be a planning body,” he explained. “The problem is we are looking at having to raise $20 billion [from the general fund] get through another year. At what point do we recognize is not sustainable? But if we want to see a divergence in Congressional behavior, we have to offer a divergent view how pay for transportation.”

As a result, Rahn pointed out, many states are increasingly resorting to “non-traditional” methods to finance major transportation projects such as public-private partnerships or P3s.

“In Maryland we’ve initiated a large P3 to build express lanes on I-270 and I-495; a $9 billion project to build 70 center lane miles that is the largest P3 project right now in the world,” he said. “We do not have the funds to do this so the only way to get them has been through the private sector. But is this the way we should be undertaking projects of national significance? Is this the way we will have to address transportation needs in the future?”