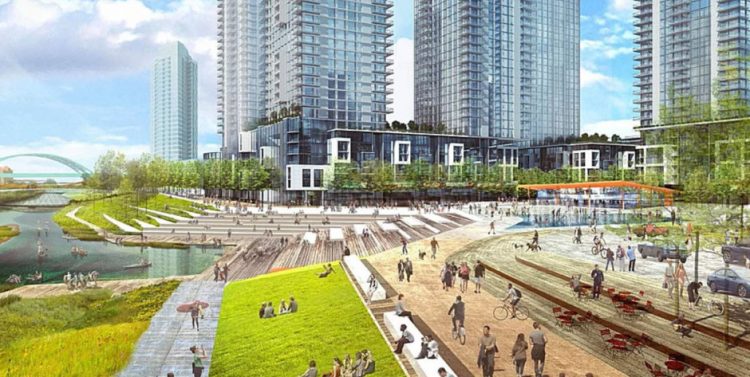 Parul Dubey on December 20, 2018 - in Land Development
A rendering from Revesco Properties’ conceptual master plan for the River Mile shows one view along the South Platte River. The company is making plans to redevelop the current site of Elitch Gardens Theme and Water Park in coming decades.

The council approved a development agreement and a rezoning for the 58-acre property, which is currently home to the Elitch Gardens amusement park.

The change gives developer Rhys Duggan high-level approvals for a plan to build roughly 8,000 residential units and some of the city’s tallest buildings along the South Platte River.

“Really, the goal of these is to make sure that even though we’re allowing taller buildings, we want to make sure we protect access to the sun, sky,” said city planner Kristofer Johnson. “We want to limit the shadows and impacts along the streets and really help to break down those larger buildings to a more human scale.”

The developer has agreed to set aside 15 percent of the new housing as “affordable” units at a mix of income levels, starting as low as 30 percent of the area median income, or $24,300 for a family of three.

“It’s many thousands of units (in total), and we’ve generally projected that somewhere between 700 and 1,000 of them would be affordable,” city planner Abe Barge said at an earlier meeting.

The developer has mentioned buildings up to 59 floors in early plans.

The new zoning doesn’t set a specific height limit for the densest parts of the plan. However, building above five floors would also require building affordable units. For example, a 12-story tower with 180 housing units would have to come with 14 affordable units nearby. (Office buildings could pay a fee instead.)

The developer also would have to obey rules to keep buildings skinny and farther apart, which creates a natural limit on height. “As you grow taller, you must grow smaller,” Johnson said.

Denver’s planners looked to cities such as Vancouver that are known for “tall, slender towers as part of urban residential districts,” Barge said. “So, tall buildings, but tall buildings with more human scale and more neighborhood feel.”

The project’s architecture could be reviewed as it develops by a city design advisory board, an idea that’s fairly new for Denver. The new rules require “active” uses of the streets, such as shops.

Duggan also will have to keep 12 percent of the site as public parks and open space, including for a potential recreation center, according to the agreement. Unusual for Denver, the new rules include maximum limits on automobile parking, which is meant to reduce auto traffic, while also requiring bicycle parking, too.

Eventually, similar rules could apply to redevelopment of neighboring properties in the Central Platte Valley.

Councilwoman At-large Debbie Ortega said it’s important that the city keep a handle on the high-density development proposals that are filling out Denver’s last available land.

“When you look at the scale of what we’re looking at along this I-25 corridor, it is massive, and if we don’t do it right we’re going to screw up this city,” Ortega said. She cited concerns about traffic and affordable housing but praised the addition of riverfront property.

Development will start small, though, with a parking deck and other structures on the park’s current surface parking lots in the near future. There is no immediate plan to shut down Elitch Gardens, according to Duggan, but it would eventually be demolished and potentially rebuilt elsewhere.

“We’re planning for the future of Denver today,” Duggan said.