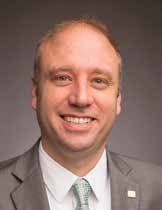 “For students getting through college and just entering the industry, I think there’s never been a more exciting and interesting time to be in the energy industry,” explains Abiecunas. “We’re doing types of projects and deploying solutions that nobody was even thinking about 10 years ago, and that’ll be true in another 10 years. There’s an enormous opportunity to be innovative, to develop new solutions, to deploy new technology that’s never been done before.”

His excitement and enthusiasm stem from a growing amount of technological innovation that’s moving energy generation and distribution into entirely new directions. Systems are becoming more about two-way energy distribution: smaller-scale power generators can add into the system as well as the traditional downward dissemination to end users. Another major trend is the lowered cost and use of renewable energy—particularly solar—and battery storage systems.

Traditional energy systems have been developed for more than 100 years to be large, centralized power generators (e.g., coal- or gas-fired generators as well as large-scale renewable systems) that then move ever-outward to consumers. New technology and efficient renewable generation systems now allow small-scale generators—such as solar PV panels on businesses or homes—to be added into the system and tracked, allowing for more competition and decreased costs.

“It’s really putting that generation and storage of power closer to the point of use, down at the distribution level,” says Abiecunas. “It’s smaller resources distributed on the system.”

According to Abiecunas, the big power-generation trend during the last 10 years is a decline in the cost of solar energy. Large-scale solar PV plants now are well under a dollar a watt and are maintaining that competitive position. “It’s really making solar affordable and competitive almost everywhere now,” he adds.

The other major trend is in energy storage. For the last hundred years, he notes, power has been generated and consumed at the same time. With improved battery storage technologies and lower prices, power can be stored and used later.

“We see the future as a mix of distributed and central station projects, but overall we’re seeing the majority of growth occurring on the renewable energy side between solar and wind, and battery storage to support that,” notes Abiecunas.

Since 2006, Black & Veatch has been producing its annual “Strategic Directions Electric Report,” which surveys its clients and business partners across different segments of the energy industry to take a pulse on what’s happening in the market and what trends the industry sees.

“The ‘new power landscape’ is a phrase we’ve used to describe a lot of the new distributed energy resources or new business models that are being opened up through those resources,” notes Abiecunas. “It’s electric vehicle charging; it’s distributed storage and microgrids and distributed solar; and combined heat and power. It’s a growing interest that we’re seeing from utility clients as well as end users to take control of their destiny and their energy spend: how they generate and consume energy.”

Utilities are offering new business models and products to their customers, expanding how they traditionally think of their businesses. There’s an evolution in the industry from a vertically integrated, one-directional type organization to a multifaceted business that’s providing a range of services to customers.

Abiecunas offers advice for companies and utilities in the energy market, noting that the ability to experiment with new technology, new solutions and new approaches is incredibly important.

“The companies able to innovate and take advantage of opportunities opened by new technology and market structures are going to be the winners,” he notes. “Those trying to do things the same way they’ve done for the last 50 years will struggle.”

On a positive note, he adds that “there’s an enormous opportunity for the energy-consuming public that, in the next 10 years, will have a greener, cleaner, more-reliable supply of energy than they’ve ever had before, and we’re all going to reap the benefits from that.”