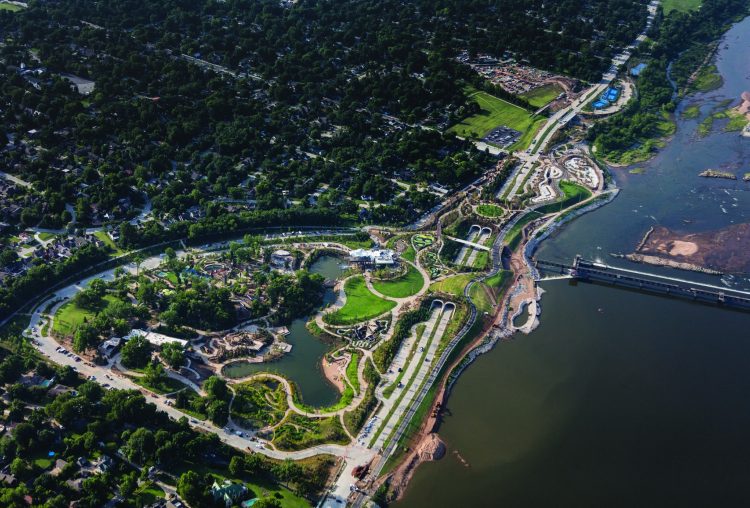 Located along the Arkansas River in Tulsa, Okla., the Gathering Place is too large and topographically complex to be taken in from a single vantage point. Circulation ties the wide-ranging elements together.

Thousands of Tulsa, Okla., residents turned out Sept. 8, 2018, to get their first look at the Gathering Place, a $465 million riverfront park developed by the George Kaiser Family Foundation. Situated along the Arkansas River just two miles from downtown Tulsa, the 66.5-acre park’s opening was a satisfying moment for Associate Principal Chris Gates and his team of landscape architects at Michael Van Valkenburgh Associates, Brooklyn, N.Y.

The firm operates from a basic belief that the most meaningful landscapes anticipate what they’ll mean to their many users and emerge from straightforward, elegant problem-solving techniques. Developed in close consultation with city officials and the local community, the Gathering Place epitomizes this belief. The new park transformed the terrain of what was originally a flat, windblown and sun-baked site by raising topography in some areas, digging down to water in others, and reintroducing a broad range of native ecologies.

The park is meant to serve its own neighborhood but also the city as a whole, featuring an abundance of activities and experiences. Access and circulation are facilitated through strategic car access and parking, regional bike trails that thread through the park, and new pedestrian land bridges that unify the site into a cohesive whole. 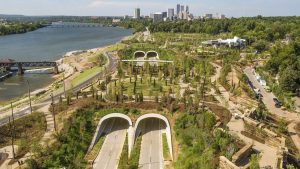 Gates first got involved with the project in fall 2010, when the George Kaiser Family Foundation issued a request for qualifications (RFQ) for firms seeking a master plan effort for some land it owned in Tulsa on the Arkansas River. Thirty six firms responded, from which four were selected for a design competition that ran from January to April 2011. Foundation representatives visited each team’s office to meet with the people involved and review their work. Michael Van Valkenburgh Associates was selected, and work began in earnest in July 2011.

“At the beginning of the RFQ, it wasn’t really known it was going to be a park,” recalls Gates. “We did a bunch of research during the competition phase, trying to figure out what the project should be. There were previous master plans developed, some proposing museums, art grounds and those types of things.

“Through our research and conversations with the foundation representatives, we felt like the space would be best used for a park,” he adds. “Part of the reason is that the city didn’t really have a central park space. There were smaller parks throughout the city, but no real large space where people could come together.”

One of the firm’s primary challenges was to conceptualize a seamless way to make the park feel like it’s one space instead of four separate ones, as the foundation owned a couple of sites, the city owned a parking lot that made up part of a site, and a county/city conglomerate called River Parks owned the existing trail system along the river.

Another challenge was grading down along the river’s edge to make it more accessible. Steep cliffs made the water almost completely inaccessible to the public.

The solution to both problems was land bridges, an idea that came up during the design competition phase. Two sets of twin-cell precast concrete CON/SPAN O-Series structures from Contech Engineered Solutions, West Chester, Ohio, provide tunnels to carry traffic on Riverside Drive, one of Tulsa’s main thoroughfares.

“Interestingly enough, while they were working on the design, we were working on a new, improved shape, which was the CON/SPAN O-Series bridge system,” recalls Tim Keilty, Contech’s area director, structures. “It was kind of a ‘perfect storm’ that the shape they submitted, completely independent of conversations with us, was consistent with the new shape we were developing.”

The top of each land bridge is covered with a variable amount of fill that supports trees, landscaping and park structures to create a safe, scenic pedestrian park experience while allowing an uninterrupted flow of vehicular traffic below.

“Honestly, it’s one of the ideas that won us the competition,” says Gates. “The bridges increased the amount of park space, and they did it seamlessly, allowing us to grade up on the edges and make the roadway seem invisible as users cross from one side to the other.”

The site now has a greater range created by digging down to groundwater to construct a central pond, rising up to cross the roadway with the land bridges, and then gently rolling down to touch the river’s edge. The design team had to navigate a huge vertical grade change between the edge of the river and the top of the land bridges, requiring hundreds of thousands of cubic yards of fill into the river to create a slope gentle enough for public access.

The design team worked with Kansas City, Mo.-based infrastructure solutions firm HNTB Engineering in engaging Contech to help with the land bridges, which consist of a series of drilled shafts at the edges, with a cap beam and precast arches on top. HNTB designed the drilled shafts and the cap beam, and Contech engineered the precast elements on top that could bear the weight of the fill as well as park structures and landscaping. 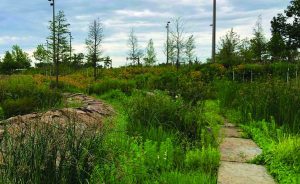 The park was designed to be a nature-inspired retreat within a bustling city environment. The Wetland Gardens (top) help filter site runoff while providing habitat for flora and fauna. The perfect circle of the Sky Garden (bottom) is nestled among a robust network of paths, plantings and seating.

“The vegetation and the amount of structural fill above each arch was definitely a consideration, but there was also a loading criteria in terms of being able to handle the city of Tulsa’s heaviest fire truck,” adds Dan Logel, a senior bridge consultant with Contech. “If something happened down near the river, the city wanted to make sure their firemen could get across the structures as needed.” 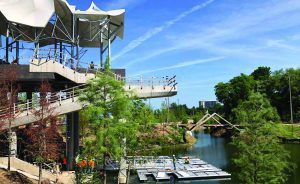 The park engages the water and creates new relationships to the Arkansas River’s edge as a recreational and natural feature. Fully integrated into the landscape at multiple elevations, the Boathouse provides access down to water level.

“Waterfront space is often isolated by a riverside or lakeside drive,” says HNTB’s National Bridge Chief Engineer Ted Zoli. “Putting a deck over a bridge uses landscape to reconnect a city to a waterfront, offering some of the most transformational opportunities in urban design. With the cost-effectiveness of precast arch bridge construction, these spaces can be generous enough to become park spaces on their own. The bridges at Tulsa’s Gathering Place are wonderful examples of this strategy.”

The biggest challenge was coming up with a cost-efficient design. Precast proved to be the more cost-effective solution vs. cast-in-place options. Producing cast-in-place elements would have required a new setup for every component, which would have been more expensive and time consuming. By using precast, the construction team was able to set a precast unit every 30 minutes from the time it arrived onsite. A local company, Arrowhead Precast, produced more than 5,300 tons of precast to create the 196 arch panels for the two land bridges. Each arch weighs 27 tons and has a span of 42 feet.

According to Gates, loading is one of the biggest concerns with designing a landscape on a structure. The Contech system offered a lot of flexibility in that regard, allowing 14 feet of fill on top of the arches.

“Contech gave us those parameters up front to help ensure we didn’t go over a certain height,” explains Gates. “We just had to make sure the materials we used were in compliance—first the drainage material, then the bulk fill and finally the horticultural soils. All those systems had to be in sync to ensure the structure wasn’t overloaded yet drained slowly enough to support the vegetative cover.” 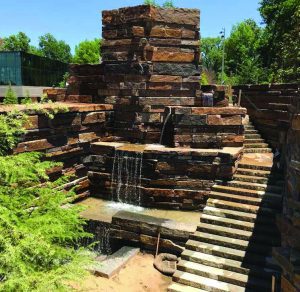 Stone and water are common design elements in the park. Mist Mountain, a central feature, combines the two. It includes a waterfall obelisk (above) and a water maze (right) with in-ground jets that create a series of water rooms.

The riverfront location inspired the idea that water should be a character-defining element of the park, so water is included in many play features and in the park’s fundamental landscape structure. Local natural materials, especially Oklahoma stone used generously throughout the park in a variety of ways, helps connect the Gathering Place to the region’s natural features.

“To say that stone is a huge component of the project is an understatement,” says Gates. “Everywhere you look there’s some stone element, whether it’s the buildings, the landscape or the play features. It’s one of the largest components of the entire project, so we worked closely with area quarries. We went down and made multiple visits to understand their fabrication capacities, stone types and color ranges. We also had them build some mockups to test their abilities.”

The design team built a large-scale physical model of the site for a series of public meetings to help people understand the proposed site improvements. The foundation also used the model for fundraising efforts. With the project totaling $465 million, Gathering Place is the largest private gift to a public park in U.S. history. 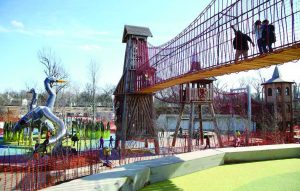 A vast landscape of play opens up in the park, with a wide variety of activities to explore.

Play spaces are a large part of the park, and their variety and breadth were designed to inspire creative and imaginative play while offering physical challenges. The site includes more than seven acres of playgrounds, encompassing everything from zip lines to 35-foot-tall wooden towers connected by suspension bridges. A skateboard park and basketball courts give teenagers and young adults abundant opportunities to enjoy the public space and the riverfront environment.

The park’s lodge and boathouse, designed by Mack Scogin and Merrill Elam, provide protection from the cold and heat, and allow for four seasons of park activity. Nighttime use of the park is encouraged through eating facilities; dramatic lighting; and venues for movies, concerts and other programs.

Even ordinary parks have a positive impact on the mental and physical wellbeing of their communities. The Gathering Place takes this notion a step further, building on an existing and valued asset—the Arkansas River—and offering an unusual density and variety of activities for all ages, thus ensuring all Tulsans can enjoy and benefit from this new public space.