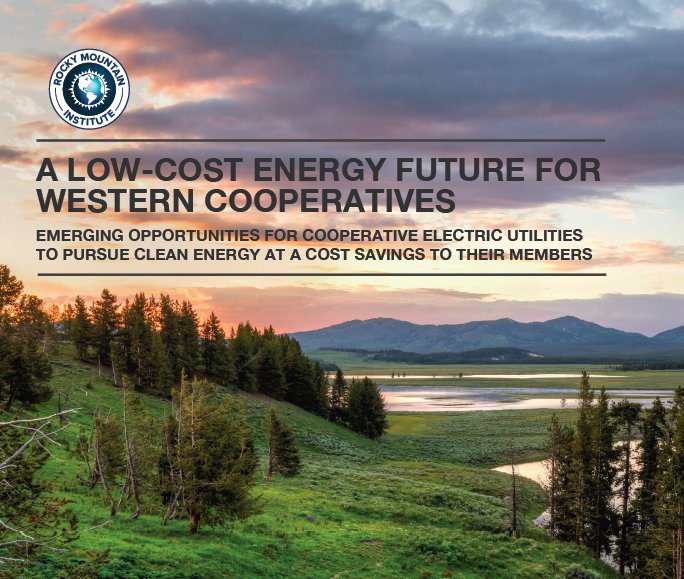 BOULDER, COLO. Aug. 23, 2018, — Declines in renewable energy pricing are creating opportunities for electric cooperatives in the U.S. Mountain West to deliver cost savings to their members, and simultaneously creating risks for those utilities that are slower to transition to these technologies, according to a new study from Rocky Mountain Institute (RMI).

To illustrate the importance of this broad regional trend, RMI produced a case study of Tri-State Generation and Transmission Association, a nonprofit, member-owned cooperative utility that provides power to more than 1 million consumers in Colorado, Nebraska, New Mexico and Wyoming. RMI found that Tri-State’s customers could save over $600 million through 2030 if the co-op integrated more renewable energy resources into its supply mix rather than continuing to operate its fleet of legacy fossil-fuel power plants. Coal generation provided approximately half of Tri-State’s generation in 2017. Furthermore, the study found a transition to renewable energy as the primary source of electricity would mitigate the risks of member rate increases resulting from customer self-generation, exits and environmental policy changes by 30 to 60 percent.

The results of the study are consistent with the broader market trends illustrated though publicly available contract prices for new renewable resources in the Mountain West region. In Colorado, Xcel Energy has proposed retiring significant coal capacity and generating 55 percent of its energy from wind and solar resources by 2026. This would likely result in a net customer cost savings, considering the highly competitive bids for wind and solar energy received in response to Xcel’s request for proposals.  The long-term fixed prices for new wind and solar projects coming into service in the early 2020s, as analyzed in the Tri-State case study, beat the operating costs of many existing coal assets in the West, let alone the cost to build and operate new coal- or gas-fired plants there, the study found.

By prioritizing utility-scale renewables and other emerging technologies such as demand response, efficiency and storage, Western cooperatives like Tri-State have the opportunity to embrace the reorientation of the region’s grid. They can also take advantage of low pricing for renewable generation—including pricing available via current tax incentives—without sacrificing reliability. And by working together to bid for and procure clean-energy technologies, Western co-ops can also guard against the potential economic and policy risks of rate increases and declining energy sales, while advancing economic development and job creation in their home communities, according to A Low-Cost Energy Future for Western Cooperatives.

The estimated $600 million savings for Tri-State members can be realized through avoiding the operating expenses and fixed costs of its fossil-fueled power plants. Operating legacy assets like these in the West has contributed to rate increases for electricity customers in Colorado, Nebraska, New Mexico and Wyoming, where rates have risen by more than five times the national average between 2007 and 2016. This is owing to the relatively high expenses of the region’s coal fleet in comparison with the lower-cost sources of electricity that much of the nation is embracing, including renewables and natural gas, according to the study.

RMI compared the cost of continuing to operate a typical coal plant at a historical run rate to the cost of retiring that facility and purchasing renewable energy and capacity at current market prices. The option that integrates more renewable energy resources would result in costs equivalent to about $32 per megawatt-hour (MWh), versus about $40 per MWh for the option that relies on the coal plant—a 20 percent reduction in operating costs, according to the analysis.

“The rapid cost declines in renewable energy projects present utilities in the West with an unprecedented opportunity,” Mark Dyson, a principal at RMI and a coauthor of the report, said. “The falling costs of these technologies compared with the costs of fossil-fuel assets allow operators to deliver lower energy bills to their customers without sacrificing reliability, all while cutting emissions, reducing risk and supporting economic development in local communities. They deserve a hard look.”

The A Low-Cost Energy Future for Western Cooperatives report can be found at: https://www.rmi.org/wp-content/uploads/2018/08/RMI_Low_Cost_Energy_Future_for_Western_Cooperatives_2018.pdf  .

Rocky Mountain Institute (RMI)—an independent nonprofit founded in 1982—transforms global energy use to create a clean, prosperous, and secure low-carbon future. It engages businesses, communities, institutions, and entrepreneurs to accelerate the adoption of market-based solutions that cost-effectively shift from fossil fuels to efficiency and renewables. RMI has offices in Basalt and Boulder, Colorado; New York City; Washington, D.C.; and Beijing.