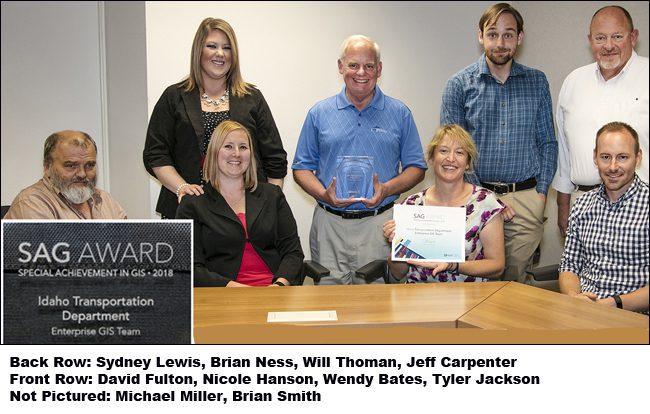 ITD’s Geographic Information Systems (GIS) group recently earned the Special Achievement in GIS, or SAG Award, on July 11 at the annual Esri User Conference in San Diego. Esri is the global market leader in GIS software, and selected ITD from more than 300,000 eligible candidates to receive the award for innovative application of mapping, data analytics, and thought leadership in the field of transportation.

There were about 21,000 attendess present, and 134 countries were represented.

ESRI looked at the work ITD is doing, then sent it to a group of peers for review, and they nominated the department for the award. Linear Referencing expert Amit Hazra said that ITD has the best road network data that he has worked with in doing roads and highways implementation projects.

The award selection was cemented by the high quality of ITD’s road network, specifically the road data for each ITD district.

“There was a single example of excellence used in the transportation category, and it was Idaho,” explained ITD Senior Service Delivery Manager Jeff Carpenter.

The SAG Awards are presented to organizations using GIS to solve some of the world’s toughest challenges, and demonstrating the most groundbreaking and transformative possibilities of GIS software.

“What our GIS Team is doing is very complicated, yet they un-complicate GIS for the non-GIS professional,” said GIS Manager Wendy Bates. “The information they provide is used to plan, design, build, maintain, and fund all of our infrastructure.”

“I’m incredibly proud of this group.”

The work the team has done is also modernizing the GIS function.

The old GIS system was based on a system used since the 1970s, requiring a lot of double entry, but only GIS experts could enter data into the old system. It also was not responsive to realignments or other location changes made to the highway system.

“Our new system allows business users from across the department to enter and edit their own data as changes are made,” Bates added.

For example, someone in the Planning Section can enter data about Federal Aid, while someone in Roadway Data can enter information on traffic counts.

The new system also provides quicker access to data, which can then be used by anyone at headquarters or in the districts to make data-driven decisions about planning, project funding, or asset management.

The new system, completed under budget and on time, enables ITD employees to produce precise data, analytics, and maps by synchronizing road data.

The new GIS system provides an outstanding data-stewardship service to the entire department.

But, here is the interesting part about this award:

ITD did not apply for it. We were selected, unsolicited.