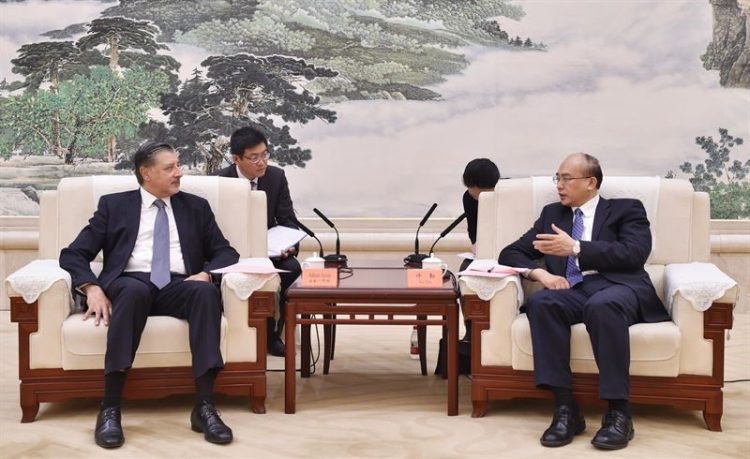 Zhangjiakou, China: The International Renewable Energy Agency (IRENA) has today signed a co-operation agreement with the People’s Government of Hebei Province, China to provide the city of Zhangjiakou with a renewable energy roadmap that will support its ambition to deliver a low-carbon Winter Olympics in 2022. The agreement will also help the city become China’s first energy transition pilot city. As co-host of the Winter Olympics with Beijing, Zhangjiakou aims to generate 50 per cent of its power from renewable sources by 2020.

The agreement, signed by IRENA Director-General Adnan Z. Amin and the Governor of Hebei Province, Xu Qin, will support the establishment of a ‘low-carbon Olympic zone’ in Zhangjiakou, with plans for both the Olympic centre and Olympic stadiums to be powered by renewable energy. IRENA will also provide strategic advice in the context of the development of an International Center for Renewable Energy Industry Innovation in Zhangjiakou City.

“China has made remarkable progress in the pursuit of renewable energy and in the transition towards a modern energy system,” said IRENA Director-General Adnan Z. Amin at the signing of the Memoradum of Understanding. “From renewable energy adoption to technological innovation – China is emerging as a leader of the new energy economy and a key actor in energy transformation.

“The pursuit of a low-carbon Winter Olympics in 2022 will not only support China’s ambition to lower harmful emissions, but it will also see them pioneer a movement towards the cost-effective decarbonisation of the world’s greatest spectacles,” continued Mr. Amin. “This agreement reflects the Agency’s deepening cooperation with China and will facilitate a positive, two-way exchange of expertise and knowledge.”

“With abundant renewable energy resources – particularly the area of Zhangjiakou City – the potential of this cooperation with IRENA is broad and bright,” Mr Xu continued. “As both sides work to advance R&D, technology innovation and the broader development of the renewable energy industry, this will support our planning for a low-carbon Winter Olympic Games.”

The Games will be the first major global sporting event held in China since the Beijing Olympics in 2008. Co-host Zhangjiakou, located approximately 200 kilometers from Beijing, has been identified as having a strong renewable energy resource endowment, with abundant wind, solar and biomass potential in the region.

Between 2012 and 2016 China witnessed a 10-fold increase in solar energy adoption, and in 2017 alone, it added 53 GW of PV. China announced an intention to invest USD 361 billion in renewable power generation by 2020. China chaired IRENA’s 14thand 15thCouncil Meetings and is President of the Agency’s 9thMeeting of the Assembly in January next year.

IRENA is a global intergovernmental organisation with 156 Members (155 States and the European Union) and an additional 24 states in accession, supporting countries in their transition to a sustainable energy future. IRENA serves as the principal platform for international co-operation, a centre of excellence, and a repository of policy, technology, resource and financial knowledge on renewable energy. IRENA promotes the widespread adoption and sustainable use of all forms of renewable energy in the pursuit of sustainable development, energy access, energy security and low-carbon economic growth and prosperity. www.irena.org