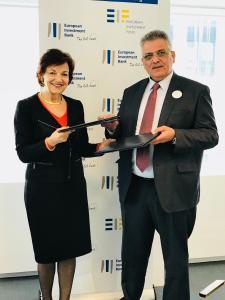 At a high-level pledging conference in Brussels today (20 March), the EIB has signed a letter of intent confirming its support for the Gaza Desalination Programme. This includes a EUR 7.1m technical assistance grant for the Palestinian Water Authority, backed by the European Commission. The EIB will launch the tendering procedure for the provision of technical assistance on 15 April.

On this occasion, EIB Vice-President Dario Scannapieco, who is responsible for the Economic Resilience Initiative, said: “The technical assistance grant for which we have signed a letter of intent today will be crucial to help the Gaza Desalination Programme enter the implementation phase. The provision of safe and clean water is vital for the more than 2 million people living in Gaza. This will help to improve people’s daily lives, reduce pollution in the Eastern Mediterranean and create local economic development and new employment opportunities.”

The EU bank’s involvement is part of a European response to address water shortages in Gaza. Support is being provided alongside the European Commission, the Union for the Mediterranean, the World Bank and the Islamic Development Bank, as well as bilateral donors. It is the largest programme ever undertaken in one of the most densely populated places on Earth.

There are only a few places in the world where fresh water is as scarce as in Gaza. Two million Palestinians in Gaza at present rely on the coastal aquifer as a source of fresh water. However, this does not satisfy current demand and over 95% of the water extracted does not meet the WHO drinking water quality standards and is therefore not fit for human consumption. With water demand increasingly on the rise, the situation for the local population is set to assume dramatic proportions.

The EIB’s support forms part of the Bank’s increased financing activities in aid of vital infrastructure under the Economic Resilience Initiative. It is helping to tackle the humanitarian crisis in Gaza.

The seawater desalination programme is expected to make a crucial contribution to the improvement of living conditions in Gaza, notably by:

During the past seven years, the EIB has provided technical support to the Palestinian Water Authority to prepare the desalination programme. Renewable energy components benefited in particular from the EIB’s expertise and technical assistance under the CAMENA climate action envelope (part of the FEMIP Trust Fund) backed by the UK Department for International Development (DFID).

The Economic Resilience Initiative was requested by the 28 EU Member States in 2016 as a part of the EU response to the challenges posed by forced displacement and migration and as a follow-up to the London Syria Conference in 2016. Focused on the Western Balkans and Europe’s Southern Neighbourhood, which covers North Africa and the Middle East, the ERI substantially increases EIB financing in these regions: an extra EUR 6 billion in addition to the EUR 7.5 billion already planned to be provided by 2020. Investments under the ERI are well on track. To date, 24 projects and EUR 1.9 billion worth of financing have been approved under the new initiative.